Poignant and impeccably scripted Emanuele Crialese's "Golden Door" tells an old story, that of Italian immigrants coming to America, with a distinctively modern lingo. Pic's intimate exploration of the subject is mixed with a panorama of hallucinatory images meant to highlight the surrealistic nature of the immigrant experience.

Salvatore Mancuso (Vicenzo Amato), a poor and uneducated Sicilian man, embarks on a treacherous journey to the New World. Along the way he encounters the well-mannered and sophisticated Lucy Reed (Charlotte Gainsbourg), a British woman looking for a man to enter America with, who begs for his support. Vicenzo agrees.

Four years after his award-winning Respiro (2002) Emanuele Crialese returns with the powerful Nuovomondo a.k.a Golden Door (2006), a film about Sicilians, the immigrant experience, and love.

The story here isn't original - a man and his family decide to leave poverty behind and look for a better life. They struggle, they dream, then they struggle more. When they finally arrive in the New World they discover that a better life isn't what awaits them.

Nothing surprising here. Plenty of films have told us similar stories.

What does surprise is how deep Golden Door reaches, how incredibly truthful the actions of the main protagonists are. Expectations, hope, disappointments, and pain, are mixed in a realistic panorama of human emotions I have a difficult time recalling seeing in another film dealing with the immigrant experience.

Even more surprisingly Golden Door is notably static, at times even minimalistic. Sicily, the journey, the immigration check-ups are hardly the focus of attention here. What Crialese's camera is concerned with are the emotions, the turmoil, the inevitable cultural shock leaving your home land behind instigates. Social status, education, language, everything suddenly becomes far less important, far less recognizable than it was at home. What does become important is how you are seen. Now.

Above all however Golden Door asks what does it mean to be a "foreigner" -- a man who speaks a different language, reveals different manners, or worships a different God? 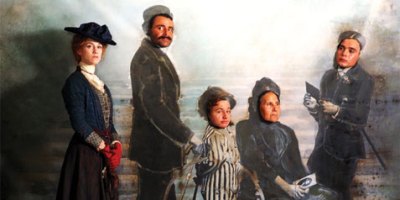 Tech credits are exceptional. The cinematography by Agnes Godard is perfectly fitting the phantasmagoria-like occasional forays into a world where giant carrots and a sea of milk are real.

The variety of costumes used to replicate the motley crew of travelers willing to become Americans is also impressive. Costume designer Mariano Tufano reveals an impressive knowledge of traditional attire.

Presented in its original aspect ratio of 2.35:1 and enhanced for widescreen TVs the print provided by Miramax is of near HD quality - it is spotless, with lush and vibrant colors, without a smidge edge-enhancement. Contrast is also handled exceptionally well providing an interesting division between the old world (Sicily) and the new world (America/the time spent on the ship).I also could not spot any dirt or damage either, just a beautiful progressive transfer of exceptionally high caliber.

In addition to the original Italian track, offered as a 5.1 mix, this disc also offers a Spanish language track which as I understand was intended. The quality of the Italian track is impressive: crystal clear and very easy to follow dialog is what we have here. There are no synch issues to report nor there any audio drop outs/hissings. With optional English, French, and Spanish subtitles.

In addition to a beautiful introduction by Martin Scorsese where the Oscar-winning director explains why Crialese's film was so moving to him this disc also has a Making Of, in Italian with English subs, where the cast and crew share their thoughts on the immigrant experience in general and the history of Italian immigrants in America.

I've seen this film more than a dozen times now. Last summer I imported the Italian disc and suffice to say there isn't a single frame here that I don't think is perfect. I am sure there are many who will see Golden Door and question its symbolism, the mix of surrealistic imagery with reality. As an immigrant myself allow me to assure you - the process of becoming what other people expect you to be is more or less a surrealistic experience.