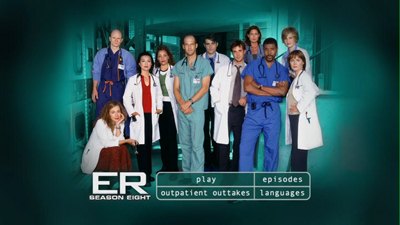 ER - The Complete Eighth Season does not begin, surprisingly, with any plot threads dangling in the air. Sure, the Kovac-Abby-Carter love triangle has some unresolved elements, and Mark Greene (Anthony Edwards) lives with the lingering fear that his brain tumor might return, but these aren't concerns that need immediate resolution. This means that year eight at County General can hit the ground running.

The premiere episode this time around is one of the show's most formalistically dynamic, proving that popularity and critical success had not caused the show's production crew to rest on their laurels. "Four Corners" is a story seen from multiple points of view, one for each commercial break. Though not exactly Rashomon, it does show the same segment of the day based on what is happening to the various doctors, the stalwarts of the show: Greene, John Carter (Noah Wyle), Kerry Weaver (Laura Innes), and Peter Benton (Eriq La Salle). Though a patient's suicide touches each doctor's story, they all pursue very different cases, and the episode effectively shows the multi-faceted set-up of the Emergency Room. It also re-establishes the status quo, which the writers will just as quickly dispense with.

By this time in ER's history, fans were getting used to shake-ups and departures, but even by the series' standards, the first eleven episodes of Season 8 (marking exactly half of the 22-episode season) rocks the boat with fast and furious waves. A significant side character dies, Doctors Chen (Ming-Na) and Malucci (Erik Palladino) lose their jobs, Cleo Finch (Michael Michelle) takes a position elsewhere, Chen gets her job back, and an old face returns. Dr. Susan Lewis (Sherry Stringfield) was one of the original ER docs, and she was one of my favorite characters in the early seasons; thus, her return to Chicago is a happy homecoming. Through her eyes, we can also see how much has changed, from the doctors on staff who don't know who she is to the ones who were barely starting their careers when she left now being all grown up.

It also provides us with a familiarity cushion when Benton moves on mid-season. After a prolonged custody battle for his son that erupts following events in the premiere, Benton is forced to make a tough choice in order to do what is best for his family. His character is one that has never been fully replaced. He was the cocky surgeon who often had more integrity than good sense, and he was also Carter's mentor. As this season plays out, the mentor position will move more and more to Carter, now one of the ER's most seasoned veterans. 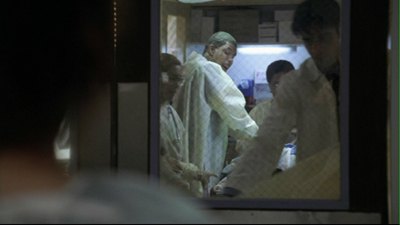 Two new additions to the cast attempt to recreate the Carter/Benton paradigm in a way. Intern Michael Gallant (Sharif Atkins) is the new wide-eyed innocent who will be forced to toughen up to make it as a doctor, while Gregory Pratt (Mekhi Phifer) is the new doc on the block with a chip on his shoulder who has to learn to play well with others (thus also making him the new Malucci). This new blood in the ER both keeps the show fresh while also maintaining dynamics that its audience has come to look forward to. Given that Phifer is now one of the leads on the show's 2007-2008 season (Season 8 ran from 2001-2002), and that the Gallant character's more recent fate still has an impact on the show, these end up being the two additions to watch.

As always, the plots fueling ER alternate between the adrenaline rush and pathos of the extreme medical cases and the more traditional character-based soap opera. In the former category, we get a variety of memorable sequences, including Weaver's in-the-field delivery of a baby during a particularly nasty storm and Corday's (Alex Kingston) trying to sort out the cause of infections that killed a string of her patients. We also see strange and morbidly funny medical cases like Carter discovering a young wife's semen allergy, the dominatrix and her bag of tricks, and the entire staff getting laid low by over-ripened cream cheese.

As for the soap opera, the main storyline is still the romantic entanglements of Carter, Dr. Kovac (Goran Visnjic), and nurse Abby Lockhart (Maura Tierney). Though things end for Kovac and Lockhart, their closeness still irks Carter, and so before he and Abby can sort things out, other monkeywrenches get thrown into the mix, including Carter's brief dalliance with Lewis and Kovac's disastrous hook-up with a troubled young woman who is as much a con artist as she is a lover. This latter character is played by Julie Delpy, who is quite good at achieving the right mix of sweet and damaged, making her alluring but dangerous, sympathetic but frustrating. These relationships hit a boiling point in episode 16 in a change-of-pace installment when that aforementioned dominatrix case gets the lovers confined to a room together awaiting sensitivity training.

As entertaining as that all is, the most memorable plot in Season 8 is the merging of those two elements, bringing the medicine and the personal travails together. If you somehow are not aware of the show's history and are reading this, here is your fair warning: after this picture, there will be spoilers. 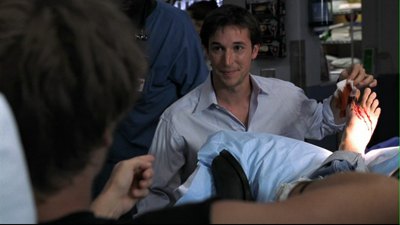 Mark Greene goes through several story arcs this season. In Season 7, he successfully battled a brain tumor, got married, and had a child with his new wife, Elizabeth Corday. Though the challenges of two doctors trying to work childcare into their already hectic lives are wearing them both down, they are generally managing with their new lives and Mark is feeling healthy. Troubles between Mark's first daughter and his ex-wife, however, means that the now teenaged daughter moves in with Mark and Elizabeth. Her adolescent acting out causes strain in the marriage, and her lack of supervision very nearly gets her baby half-sister killed.

As bad as that is, it is not the worst thing that Greene faces. Around Christmas, his tumor returns, and this time it's inoperable. Only having a few months to live, he has to patch up his relationship with his wife, make peace in his family, and square his life away before his speech and motor functions fail him. It's a touching series of shows, and the send-off for one of the series' most beloved characters is heart-rending. Anthony Edwards, who had always been a good actor but whose years on ER forged impressive thespian muscles, is remarkable at showing the pain and the destruction the illness is having on his body. If he hadn't been so good over the eight years of the show, though, the audience wouldn't have had such an emotional connection with the character. It's a real case of an actor and a fictional persona merging to form a new life.

Greene's last episode is the 21st of Season 8, leaving the season finale to prepare us for the new status quo. Carter faces his first challenge as the senior doctor of the ER, and it turns out to be a disease outbreak that no one expected. Fast-paced and exciting without resorting to some of the cheap tricks of other ER season finales, this is one ER exit that is everything it needs to be. 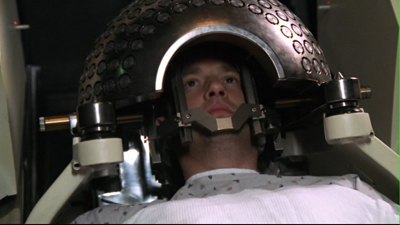 ER - The Complete Eighth Season is another banner year for a show that's already had more good years than most other series can muster. My only story complaint in regards to this set is episode 19, "Brothers and Sisters." In a cross-over with the then new NBC show Third Watch, Dr. Lewis coordinates with that cast in New York to try to find her missing sister and niece. Unfortunately, one half of this story was part of another series, and thus we only get the ER segment--which kind of sucks, especially since the missing part is the resolution.

Video:
ER - The Complete Eighth Season was shot in widescreen and the DVD transfer is in a matted widescreen format. I generally expect the ER discs to look pretty good, and this box is no exception. I noticed some occasional edge enhancement, usually in outdoor scenes where the light causes some fuzziness, but the shows look clean otherwise. No spots, no stutters.

Episodes can be chosen individually, or they can be played all in a row. If watched individually, you can also select to watch any deleted scenes at the same time.

Sound:
A Dolby stereo mix is pretty solid. I didn't notice any great effects, but there weren't any problems that stood out either.

This set claims on the back of its box to have French and Spanish subtitles, but these are not actually available. There is, however, a Closed Captioning track in English.

Extras:
Fourteen of the twenty-two episodes have deleted scenes. Sometimes these are just a short trim, sometimes they show further nuance given to certain character situations or subplots that were otherwise dropped.

There is also the usual gag reel done for the benefit of the cast and crew at the wrap of the season. It's thirteen-minutes long, mostly flubbed lines and crack-ups, a couple of pranks, and two minutes of Anthony Edwards wiping out on a surfboard.

The packaging is in the same mold as the previous season sets, making for a consistent library. A skinny, folding cardboard folder holds the six discs in double-up plastic trays, and the folding sides contain disc-by-disc, episode-by-episode guides with synopses, writing and directing credits, and indicating which episodes have the deleted scenes, also called "Outpatient Outtakes." The whole thing fits into a durable outer slipcase. The box does mislabel disc two as having the gag reel, though; it's actually on disc three.

FINAL THOUGHTS:
ER - The Complete Eighth Season manages to hit the eight ball into the corner pocket at just the right time to win another diagnosis of Highly Recommended. Though the Emergency Room would have even more shake-ups than even in previous years, seeing one original show doctor return as two more shuffle off makes for a big change; thankfully, the added ensemble players that have gathered in their stead make it still worth watching. With several solid story lines, stand-out individual episodes, and Anthony Edwards stepping out causing Noah Wyle to become the series lead, the show rings through its eighth year with its quality still intact and ready to keep swinging for Season 9. Bring it on! 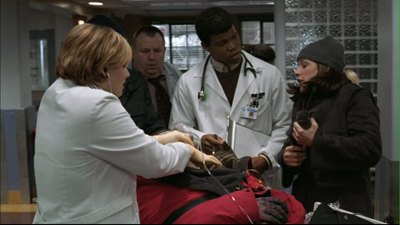