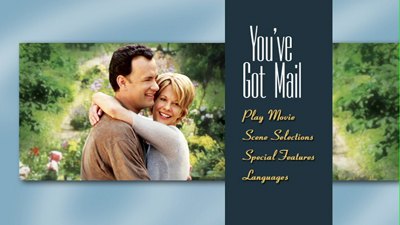 I had never seen You've Got Mail before tonight. I know, I'm shocked, too. Me, Mr. Rom-Com, somehow missed a Tom Hanks/Meg Ryan vehicle. A remake of an Ernst Lubitsch movie, no less. The film geek in me should have capitulated at some point, if for nothing else to add some fuel to the righteous fire of indignance.

Yet, despite not having seen it, I felt like I'd seen it. Or at least felt like I was entitled to accept that it wasn't very good. There are just some movies like that. We go with the flow of popular opinion. It even becomes the butt of jokes. You remember that episode of Undeclared where Seth Rogen's character, Ron, admits that even though he tells everyone that Red Dawn is his favorite movie, it's really You've Got Mail? He describes it as "cool waves lapping at your feet," and says, "Tom Hanks, Meg Ryan, a very likable Greg Kinnear...you think you're better than it, like 'Ooh this movie's going to suck,' but then you watch it and it becomes a part of you."

Okay, I'm not exactly ready to hand in my Membership to the Snooty Society just yet. I didn't find You've Got Mail to be all that. If I were Marshall and I had just watched the movie with Ron, he'd be punching me as payback for me not liking it as much as him. Even so, Ron's not entirely wrong. The Nora Ephron film, now being released a second time on DVD as You've Got Mail: Deluxe Edition, is not as bad as we've been told. It's no classic, either, and it holds up the law of diminishing returns that has been dogging Ephron since When Harry Met Sally..., but this 1998 effort is not rock bottom quite yet. 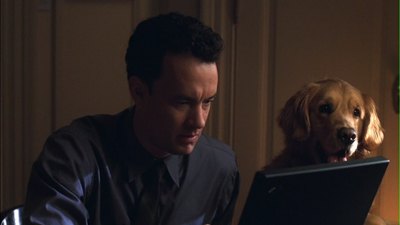 Tom Hanks is NY152, an online persona who has been enjoying a healthy e-mail relationship with Shopgirl, as typed by Meg Ryan. Having agreed to keep all telling personal details out of their correspondence, they have found that they can engage in a free-flowing exchange of thoughts and ideas cut loose from the embarrassment or the complications of real life. This also means they don't have to divulge that they are currently seeing other people, nor do they have to accept the guilt of infidelity. Of course, since this is Hollywood, they also are oblivious to the ironies that dog their online relationship.

For one, despite living in New York, one of the largest cities in the world, they live in the same neighborhood and regularly walk the same route to work. For as far as the internet can take them, they have not traveled much of a distance, and for as close as it can bring them, they may as well be worlds apart. Except they are not worlds apart, they are actually business rivals. NY152 is Joe Fox, the heir to the Fox fortune, built on high-discount chain bookstores that are crushing small businesses like the one run by Shopgirl. She's really Kathleen Kelly, proprietress of the Shop Around the Corner (the name of that 1940 Lubitsch film), a children's bookstore she inherited from her mother. Thus, when Joe and Kathleen meet, the wrong kind of sparks fly, dooming their virtual love affair if ever they find out that they are really whom they've never said they are.

Except it's really the movie that is doomed without this revelation. In its first half, You've Got Mail is predictable and pedestrian. The only thing more troubling than its easy connections and intimate relationship with coincidence is its idyllic portrait of the rich life customers have amongst the shelves of Joe's warehouse-sized storefront. In 2008, the movie's silly view of online relationships is quaint; its embrace of conglomerate culture is not. Then again, it's a Warner Bros. movie, and Warner Bros. did own AOL, and they also probably push a lot of books and You've Got Mail DVDs through the real-life equivalent of the Fox stores (or is that name a subtle dig at their competition?), so I really shouldn't have been surprised. Besides, this is a cotton-candy love story, and I shouldn't worry my pretty little head over it, anyway.

Joe discovers the truth long before Kathleen does, and when he takes steps to fix the damage he has done between them, You've Got Mail finally takes off. The biggest problem with Nora Ephron's formula for working with Tom Hanks and Meg Ryan, the one she established with Sleepless in Seattle, is that she spends too much of her movies keeping them apart. It's when the actors come together that this movie finally becomes something worth watching. They have a natural rapport and complementary comedic styles--he gregarious and boisterous, she cute and goofy with a hint of mean--and watching them together is reminiscent of the classic Hollywood couplings that Ephron is so desperate to reference. She needs to trust her performers more, because they can save the day when her material fails her.

By the conclusion of You've Got Mail, the considerable pressure applied to my heartstrings paid off, and though it did not become a part of me the way Seth Rogen insisted it would, I didn't find myself hating it. I didn't cry, though. I just had something in my eye. Well, both of them actually (to paraphrase another Judd Apatow production). I mean, come on. They had mail! Do you know how powerful that is?! 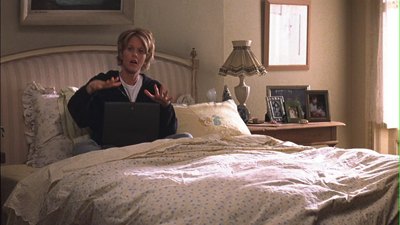 Video:
I am not in possession of the original 1999 DVD release of You've Got Mail nor is there an archived DVD Talk review for me to refer to, so I can't really say how well this Deluxe Edition fares picture-wise compared to that disc. Both were 1.85:1 and anamorphic, and nowhere on the packaging is there any indication that a new transfer was created. Overall, the image quality of You've Got Mail: Deluxe Edition is decent, with good warm colors and not as strong dark colors. Solid blacks are shimmery, most noticeable in a black screen fade from one laptop cover to another midway through the movie. I didn't see any dirt, though, and only the most mild of edge enhancing.

Sound:
The audio is likely the same from the old disc, a 5.1 soundtrack that has no real problems and is sharp and clear throughout. There are also French subtitles and English Closed Captioning.

A second audio track isolates the music from the rest of the sound. This, too, was available on the old disc. 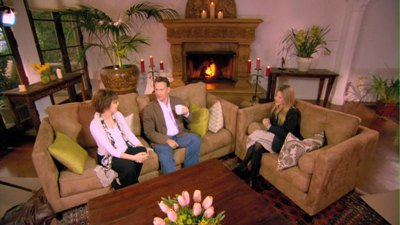 Extras:
If you own the first edition of You've Got Mail, then you have most of the bonus features available here. Holdovers that survived the last decade include an audio commentary by writer/director Nora Ephron and producer Lauren Shuler Donner, the HBO First Look promotional program, an interactive map of the New York area the film is set in, and the aforementioned music-only audio option. There is also a video for Carole King's "Anyone at All," and I'm not clear if that is a vintage extra or something new, but it's there nonetheless.

So, then, what is so deluxe about this Deluxe Edition reissue? Well, as trumpeted everywhere on the box, two brand new featurettes capturing stars Hanks and Ryan reminiscing with Nora Ephron about the movie ten years after the fact (along with other commentators). "Delivering You've Got Mail" (25 minutes, 25 seconds) is the first, and the main thrust is the approach to making the movie, including talking about the source material and other versions of the story. Given how much time they focus on the Hanks/Ryan combo, you'd almost think the second featurette, "You've Got Chemistry" (26 minute), would be redundant. Well, no worries. This one is barely about You've Got Mail at all. It's more about the Golden Age screen couples who have a back catalogue in the Warners library. Entertaining and illustrated with clips, the info scholars and historians give in regards to Bogart and Bacall, Tracy and Hepburn, Rooney and Garland, and the like is not greatly innovative, but if you like old movies, it will do. Mickey Rooney is the only actor discussed who actually appears in a new interview.

FINAL THOUGHTS:
Okay, I admit, I kind of liked the You've Got Mail: Deluxe Edition. I didn't love it, don't get me wrong. Despite a little laughing and a little crying, it didn't become a part of me. Yet, there is something irresistible about Tom Hanks and Meg Ryan together, the kind of screen magic we don't see enough of now that computer effects and high-concepts rule the Hollywood school. Sure, there are elements of this 1998 romantic comedy that are already more dated than the 1940 movie it's a remake of, but it still has enough heart to recommend you Rent It. The movie isn't as bad as you think it is, trust me. If you like it enough to own the original 1999 DVD already, you may be interested in updating your collection with this new version, but only if you're excited enough by DVD documentaries that you have to have the two new ones given here, which together are merely okay. 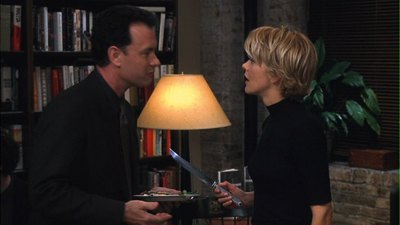