Romeo and Juliet: A Monkey's Tale 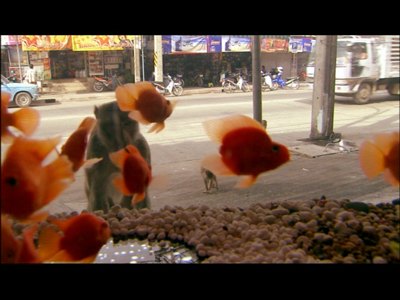 Romeo & Juliet: A Monkey's Tale is a cute Animal Planet program that takes footage of monkeys in a Thai city and works it to fit with the traditional Shakespearian narrative of youthful star-crossed lovers. With apologies to Baz Lurhmann, writer/director Karina Holden gives style and shape to a documentary film showing these creatures in a unique habitat.

The monkeys in this story are split into two troupes. One lives in the ruins of a palace in one part of town, and so they are cast as the more powerful and sophisticated Capulets. Among them is the strident Tybalt, who is also cast as the narrator of the show. Juliet is a cute little monkey with white highlights around her eyes that almost look like make-up.

Directly across the street from the ruins is the city and its active marketplace. This is where the other monkeys live, the street-smart Montagues, who roam amongst the people and get by on what they can thieve. (We actually see a shot of one monkey digging into a woman's unattended purse.) Here we find Romeo, a mohawked male. As happenstance would have it, on the night of a romantic Thai festival, Juliet does what we are told her kind never do and crosses the street. There she meets Romeo, and they fall in love.

There is a lot of happenstance in Romeo & Juliet: A Monkey's Tale, and for as sweet as it is and for as much as I like watching monkeys, the fabricated nature of the story kept me from really engaging with it. Perhaps it's a case of me being too big for my smarty-pants britches, but I couldn't stop wondering how much the footage was being manipulated to fit the imposed story. There are so many long shots, I was never sure I was seeing the same monkeys I was told were our lovers, and I wouldn't have minded some actual explanatory interjections. Do monkeys really get amorous, and would they risk crossing tribal lines? Also, how convenient was it that Romeo, after being run off of the Montague territory, goes and gets on a train and leaves town, just at the point of the story he is supposed to? Did someone nudge him?

Given that this is a 43-minute television program, I am probably expecting too much from what I am sure is intended to be a sweet Valentine's DVD release. To be fair, the footage of the monkeys and the location the filmmakers found is incredible, and I also enjoyed seeing bits of a street festival in celebration of the furry locals. Yet, even that could have used a little more explaining, and when it came down to it, I didn't really want to see two monkeys in love, I wanted to know more about how they got along in such a hectic, modern environment, and the clash of the opposing environments on either side of the street. 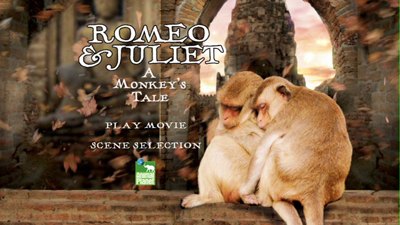 Video:
This "matted" widescreen presentation looks as good as it likely did on television. It's a new program, and so crisp and without image issues. Nicely done.

Sound:
The digital stereo soundtrack is average. There really isn't much audio here, just the voiceover narrative, a little music, and a little natural ambience.

Extras:
None to speak of.

FINAL THOUGHTS:
It could be a case of misplaced expectations, but Romeo & Juliet: A Monkey's Tale didn't really woo me. I love monkeys, I love Shakespeare, and nature films can be given a narrative without sacrificing their authenticity, but in this case, the star-crossed lovers scenario felt forced. Still, the Animal Planet documentarians get some really great shots of these groups of primates getting along in a busy Thailand city, as well as some footage of the local color. If that at all interests you, or if you have a monkey lover in your life who might require a unique Valentine with a prehensile tail, Rent It. Just make sure you get some good chocolates at the same time. Maybe with a banana truffle filling 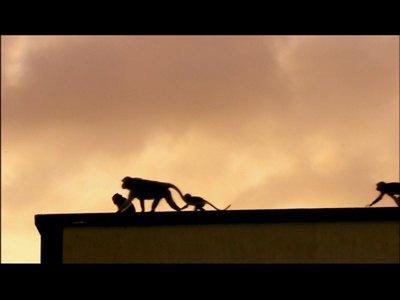