A poignant tale about an Iranian woman struggling to endure the discriminating nature of the society she belongs to Kambozia Partovi's Café Transit a.k.a Border Café (2005) is a bold message that needs to be heard. Pic puts in perspective the struggle of Iranian women to overcome religious and societal prejudice in a manner rivaling that witnessed in the director's equally impressive The Circle (2000).

A young widow (Fereshteh Sadre Orafaiy) decides to follow the steps of her late husband and run the truck-stop café the family once managed. But her brother-in-law has other plans - he wants the woman in his house claiming that it is his duty to look after his brother's family. Knowing that it is nothing more than a pretext to have her as a second wife the widow denounces the honorable intentions of her relative. In the meantime a traveling Greek trucker falls madly in love with the widow.

Addressing conventional religious and cultural taboos that may appear rather disturbing in the eyes of Western viewers unfamiliar with Iranian traditions Border Café continues an important trend in Iranian cinema. With the introduction of an intriguing romance involving a foreign trucker (!) the film effectively touches upon multiple issues at once - the accepted dominance of men in Iran, the power of "traditionalism", the justification of discrimination with religion.

Aside from making its critical intent known however Border Café also works equally well simply as an unconventional love story. The main protagonists are colorful, struggling enticing dilemmas, and offering fascinating solutions to the issues at hand. Given the environment they are placed in how they cope with adversity eventually becomes the focal point of this film.

A clash of cultures, perhaps a convenient platform to make his message even more effective, isn't introduced by Partovi. Even with the motley crew of secondary characters Border Café remains a strikingly intimate film. The Iranian widow and her struggles to weather the "justified criticism" she prompts follow a fascinating route allowing the viewer to analyze the story from multiple angles. 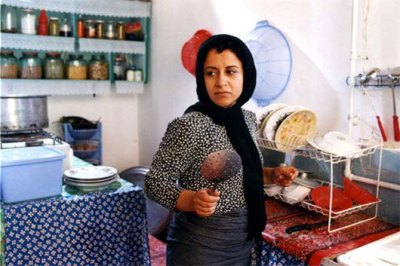 The technical presentation is equally impressive. The pacing of the film is consistent and very much complimenting what Partovi aims to achieve. Cinematographer Mohammad Reza Sokout captures the breathtaking beauty of the area where the café is located flawlessly without resorting to excessive focus on detail. Logically, Border Café becomes a visual treat with an important message I found difficult to resist.

The film arrives in North American as part of First Run Features and their Global Lens series, a collection of important world films with limited exposure to mainstream venues. Unfortunately, even though Border Cafe is presented in its original aspect ratio of 1.85:1 it does not appear to have been enhanced for widescreen TVs. In addition, the actual print has been converted improperly, most likely from a PAL master, and as a result there is a steady dose of "ghosting". Furthermore, I must point to your attention that the overall look of the film is quite "blurry" as detail is hardly as impressive as I hoped it would be. On a positive side there aren't any major issues with the quality of the actual print - it is free of damage and for the most part in healthy condition.

Presented with a DD Farsi track, including portions of Greek, Turkish, and Russian, the audio presentation is acceptable. The dialog is easy to follow and I did not detect any issues of concern to report here. Perhaps a more elaborate 5.1 track would have been a great addition considering some of the great tunes heard throughout but nevertheless one should be able to enjoy the film as it is.

Aside from the Director's Statement and his biography the only other supplemental material you would find here is the promo trailer for the Global Lens Series.

Poignant, well-paced, and with a very strong message Border Café is one of the best Iranian films I have seen. It is difficult to imagine that the world we live in could be so distant, so elusive, so impossible for many Iranians. Truly, I could not recommend Partovi's film highly enough. This being said the presentation is on a disappointing side but I have come to appreciate what the Global Lens Collection offers - a look at world films practically no one cares to promote. With this in mind and being aware of the technical description above: Recommended.