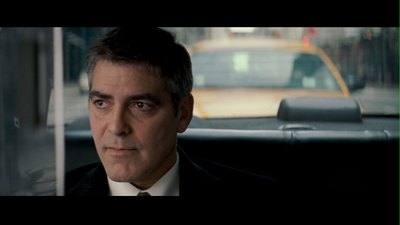 Michael Clayton is the kind of smart thriller that used to be de rigueur back in the 1970s. It recalls a time when good characters were as high a concept as anyone needed, and when directors had enough faith in their audience's intelligence to follow a story without having the particulars rolled up into easily digestible bites. Michael Clayton is a sandwich with the crusts still on.

George Clooney is Clayton, in an Oscar-worthy performance that in any other year would nab the big prize; there but for the grace of Daniel Day-Lewis goes George. His character is a fixer for a big law firm, meaning that when a client or the company steps in a mess, he's the man who figures out how to pull their foot out without having too much stink on their shoe. He prefers to call himself a janitor. He bats clean-up, that's all. Being the best at his job comes at a price, though. Clayton's personal life is his own personal mess. Trouble with the wife, his kid, his brother--these are things he can't fix.

The fan starts to really take a pounding of the nasty stuff when one of the firm's biggest players, Arthur Edens (Tom Wilkinson), has a psychotic break while working one of their biggest cases. They are trying to make a grievance of corporate negligence go away, and losing the class action lawsuit will lose the client big money. Arthur uncovered too many things that his conscience couldn't bear the weight of, and with Clayton trying to fix the hemorrhage, that weight is going to be passed to him. He will soon be in deeper than he even realizes, part of a plot that might include his bosses (Sydney Pollack and Michael O'Keefe) and a rising executive (Tilda Swinton) that serves as internal counsel for the corporate client . As it turns out, solving the firm's problems may be secondary to Michael Clayton extracting himself from the quagmire unscathed.

The less you know about Michael Clayton going into it the first time, the better the movie is. Writer/director Tony Gilroy, the scribe behind all three of the Jason Bourne movies and the ice-skating romance The Cutting Edge, has created the cinematic equivalent of Connect Four here. It takes a while for the pattern to emerge, to see all the pieces line up, but waiting for it to happen is one of the more riveting motion picture experiences I had in the last year. From the movie's somewhat obtuse opening all the way to the final credits--which are maybe the best closing credits I've ever seen in a film--I couldn't look away from the screen, and the more Gilroy had me guessing, the more I hungered for him to pose even more questions.

As I said, George Clooney is remarkable in the title role. For all of the actor's considerable charm, not enough is made of how well he can dial it down. Michael Clayton is like an old hound dog too tired to go out on the hunt but yet roused from his sleep and taken out into the woods anyway. The character spends most of the film on autopilot, and the arc of the story is very much about him finding his confidence again. Clooney makes the transition look effortless, reestablishing a sense of purpose and moral empathy for a good man who has lost his way.

Backing the actor up is a champion supporting cast. Tom Wilkinson is fiery as the emotionally troubled lawyer, and Tilda Swinton is cold and calculating while still managing to show the precarious nature of that icy demeanor. All it would take is the wrong calculation for the chill to forcibly thaw. Put these folks on a set with a director like Gilroy, who knows exactly what he is doing and what he wants from each shot, and there is no way Michael Clayton can lose. Given the shifty nature of the storytelling, all involved are asking for the audience's trust, and if you give it, you won't be sorry. They really are going some place, they aren't just taking you for a ride. 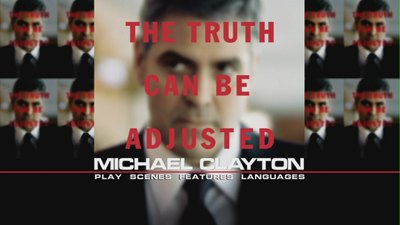 Video:
Robert Elswit shot Michael Clayton, giving it a corporate chill, as if the world was lit entirely by incandescent, fluorescent bulbs. The man is on a roll, also having shot There Will Be Blood. I mention this by way of saying that if the 2.35:1 widescreen transfer on Michael Clayton had not been top of the line, it would have been a crime worthy of its own steely eyed movie thriller. Thankfully, the picture here is sharply tuned to give every detail its due.

Sound:
There is no skimping in the audio department. There are four separate sound mixes: English 5.1, English 2.0, French 5.1, and Spanish 5.1. There are also subtitle options for each language, and an added English subtitle geared toward the deaf and hearing impaired. I found little to complain about in the main English mix: a very conscientious soundtrack set-up.

The bonus features also have most of the same audio choices, including subtitles. There is even a subtitle option for the audio commentary.

Extras:
There aren't a lot of extras here. Three deleted scenes are largely insubstantial. Two add some information to a couple of existent scenes, and it's easy to see why they were cut, they just weren't necessary. The longest scene gives us a little more of a look into Michael Clayton's love life, and though well done, it again wouldn't have added that much. There is optional audio commentary for these scenes by Tony Gilroy and the film's editor, his brother John Gilroy.

The Gilroy boys have also recorded a full-length commentary for the main feature. Beyond the sibling connection, John is a good choice to bring into the recording booth given how the puzzle-like nature of the film needed a good editor to help construct the narrative. It's a decent commentary, a little dry and with some dull notes, but for a technical overview, it's not bad--though it can get a little pie-in-the0sky at times. Apparently everything and everyone was about as perfect as can be. Sometimes, the sparkle feels a little like a shine job.

FINAL THOUGHTS:
Highly Recommended. Michael Clayton is an engaging, engrossing thriller about the backroom deals made by lawyers and their corporate clients and the lengths they will go to preserve their financial standing. George Clooney is remarkable in the title role, playing the man at the law firm you call when you need things taken care of. For the first time in his professional life, Michael Clayton in a situation he can't fix, and the movie follows him as he searches for his way out. With outstanding support from his fellow actors and his director, Clooney has another classic on his hands. Most of the answers are saved until the end, but the queries are intriguing enough that you'll really want to stick around to find out how it all comes together. 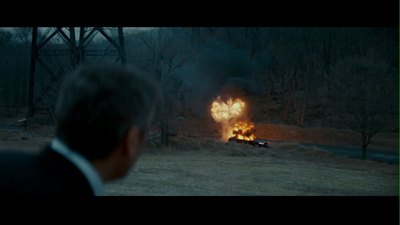