George of the Jungle: Complete Series

While I'll readily admit that Jay Ward's Rocky and Bullwinkle is the pinnacle of kids shows from the 60's, being both outrageously funny and popular with kids and adults (what baby-boomer can't recite reams of dialog from the show "Hey Rocky, watch me pull a rabbit out of my hat...") for my money Ward's George of the Jungle comes in a close second. First broadcast in 1969 on Saturday mornings on ABC, the show only had a brief seventeen installments (which ABC kept re-running over and over for three years) which are still fondly remembered. Classic Media has now released the entire series on a two DVD set which proves that this final Jay Ward produced TV show (he went on to do TV commercials) are just as funny now as they were over 35 years ago. 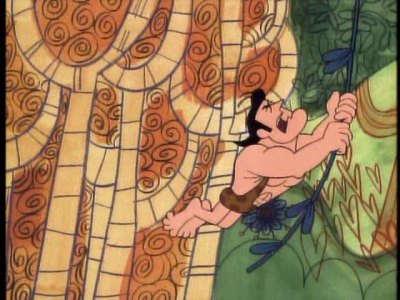 Similar in format to the Bullwinkle Show, the half-hour George of the Jungle TV show actually consisted of three 7 or 8 minute segments. The lead was, naturally George of the Jungle, followed by an adventure with Super Chicken, and rounded up with Tom Slick. All three programs featured self-contained stories, so there wasn't the chance for sprawling multi-part adventures like Moose and Squirrel were able to have. This is the show's greatest weakness as some of George's adventures end just as they start to get going.

George was easily the funniest segment of the three cartoons that made up the show. Watching variety shows as a kid, it was hard to avoid the Tarzan parodies, which were a staple of the genre. Most of these featured a Tarzan who was unathletic, weak, and ineffective. While they were mildly amusing, even at the time I remember thinking that the writers just didn't get it. A weak Tarzan is just dumb (how would he survive) but a strong, dumb Tarzan, now that's funny! That's what George is, a powerful brute of a man whose very limited intelligence is the source of the show's comedy. George is married to Ursula (reputedly named and designed after Ursula Andress) whom he refers to as "fella" and "that strange-looking guy who never shaves." His pet elephant is Shep, though George thinks he's a "big grey peanut-loving doggie", and his best friend is an ape named Ape who talks with a cultured Ronald Coleman-style voice and is much more intelligent than George. Each week some minor problem will strike, which George invariably makes even more disastrous before the final resolution. Filled with groan-inducing puns, often brilliant dialog, and absurd situations, these cartoons are a laugh riot. 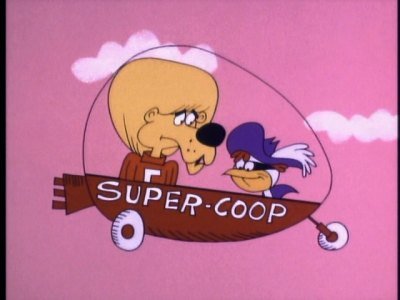 Next up is Super Chicken. This superhero parody successfully skewered comic heroes nearly as thoroughly as George does jungle films. When Henry Cabot Henhouse III drinks his special tonic (served in a martini glass) he transforms into Super Chicken, protector of the weak. Aided by his lion-butler Fred, every episode SC solves some outrageous crime. In one of the early episodes he recovers the state of Rhode Island, which had been stolen by a super-criminal. For some reason the jokes don't fly quite as thick in this cartoon, making it not as hilarious as George's adventures. The highlight of the show is often SC's weekly admonishment to Fred: "You knew this job was dangerous when you took it." 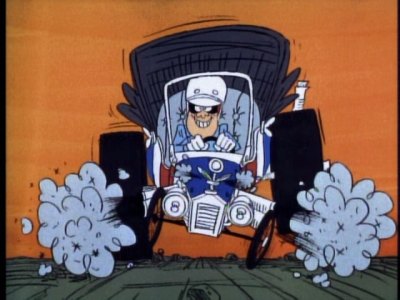 The final cartoon is the weakest segment of the show, Tom Slick. Tom is a clean-cut, all-American race car driver who manages to triumph over the evil drivers who try to sabotage the races he enters. A do-it-by-the-numbers show feels like an afterthought. The puns were more obvious (in one episode Tom races against Baron Otto Matic) and thought some of the set-ups are quite funny; the cartoon never seems to follow through.

Even with Tom Slick having one cylinder not firing, the whole George of the Jungle show is a lot of fun. While the lack of continued adventures means that there's less satire than Bullwinkle's show the upside is that there's not a lot of time to set up the plot, so each installment really hits the ground running.

The entire 17 episode series of George of the Jungle come on two DVDs that are housed in an attractive custom case. The width of a single keepcase, this thick board container opens to reveal clear plastic disc holders on each side for the DVDs and a nice scene of George swinging into a tree underneath. 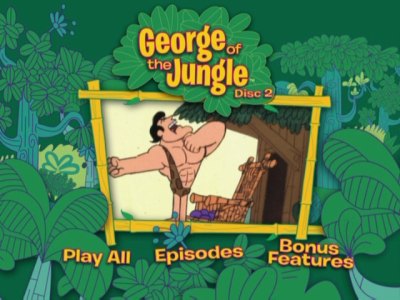 This show comes with a Dolby Digital two channel mono soundtrack that is pretty much what one would expect from a vintage children's show. The range is a bit narrow and the show sounds sparse when compared to today's shows, but the audio reproduces the dialog and sound effects sufficiently.

The full frame image looks very good though not exceptional. The lines are tight and the contrast is fine, but the colors are a little dull and not as bright as I'm sure they were when the show was first broadcast. The prints used for the transfer were in good condition though there were a few dirt specks here and there. On the digital side of things there is some minor aliasing but other compression artifacts were absent.

This set also features the original pilot for George of the Jungle and Super Chicken. These were fun to watch, and had some differences from the cartoon as it was broadcast. George was pretty much the same, though Ursula is refered to as "Jane". Super Chicken had the most changes. His secret identity in the pilot was that of millionaire Hunt Strongbird Jr., he didn't need to drink his Super Chicken tonic to change, Fred didn't know his secret identity, and the show's catch-phrase "You knew the job was dangerous when you took it" isn't uttered. A nice look at the shows, though I can't help wondering what happened to Tom Slick's pilot.

Just as funny as it was over 35 years ago, George of the Jungle is a classic cartoon show and having the entire series in one nice DVD set is a treat. Animation fans young and old alike will enjoy this set of seventeen all-too-brief episodes. Highly Recommended.