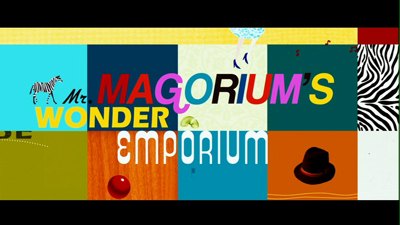 I'll say one thing for Mr. Magorium's Wonder Emporium, it's got a great title sequence. The elegantly designed animation brings to mind classic credits sequences by Saul Bass, as well as a little Pink Panther, Rocky & Bullwinkle, and Catch Me if You Can. Unfortunately, there is a movie that follows this short cartoon, and here our troubles begin.

Mr. Magorium's Wonder Emporium is 90 minutes of forced whimsy that never quite gets off the ground. It bristles with ideas and an enormous sense of its own cleverness, but it fails to conjure the fireworks of imagination it professes to represent. I realize that it can be argued that I am the same kind of stuffy, overly serious adult that the film ridicules, and that to truly enjoy the movie, one must approach it with a child-like mind, but I submit that Mr. Magorium's Wonder Emporium was not made with a child-like mind. For all of its mocking of poor Mutant the Accountant (Jason Bateman), it sure has a lot more product placement than a pure flight of fancy requires. It also has a prominently displayed Rene Magritte painting, a tell-tale clue of postmodernism at work, and a climactic speech that necessitates at least a passing knowledge of King Lear. This is more than most elementary school kids can muster, and thus suggests that writer/director Zach Helm has bigger fish he is attempting to fry.

I was so looking forward to Mr. Magorium's Wonder Emporium, too. Helm is a bit of a wunderkind, and the first film he penned, Stranger than Fiction, is a metafictional delight. You can feel the same brainy scribe behind that modern marvel struggling to make his directorial debut work, but he seems caught between two worlds. Should he make a children's movie or make a pop art joke that will speak to irony-addled adults? You gotta serve somebody, Mr. Helm, so I wish you had picked a side.

The story of Mr. Magorium's Wonder Emporium is one of Mr. Magorium and his Wonder Emporium, a magical toy shop that bends to the wily will of its owner. Dustin Hoffman stars as Magorium, and the actor gives it his level best to concoct a crazy character on par with Gene Wilder's Willy Wonka or even Emma Thompson's Nanny McPhee. He falls well short of the mark. But then, neither of those actors was playing their fantastical Pied Pipers in the final act of life. This is another reason I wouldn't call Mr. Magorium's Wonder Emporium a kid's movie, because it's essentially a movie about death. Not death as it relates to a child who has to deal with the passing of a fun-loving patriarch, which would be closer to acceptable, but death through the eyes of a woman in her '20s trying to find her way in life. When screener prints of this movie were shipped to theatres for sneak peeks, it was smuggled under the unimaginative title of "Magic Shop;" they could have just as easily called it "Willy Wonka and the Chocolate River of Styx." 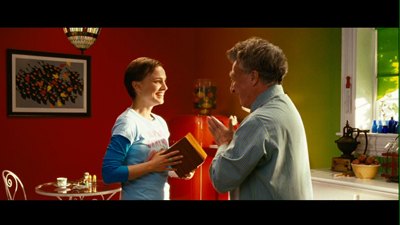 Mr. Magorium has been making toys since the 17th century, and he realizes that it is time to move on. His wish is to secure his legacy by handing the reins of the store to his right hand gal, Molly Mahoney (Natalie Portman). He hires an accountant, the aforementioned Mutant, to sort out the particulars, though one can see right away that his motives are likely to fulfill Helm's Screenwriting 101 flow chart and provide Molly with a possible love interest. Also along for the ride is weird 9-year-old Eric (Zach Mills), who acts as narrator and thus is supposed to provide us with that sense of wonder that comes with the Emporium. If he's handing it out, however, I defy you to find it.

The whole of the movie hinges on the toy shop, and it's really the toy shop that fails miserably. In truth, most of the acting in Mr. Magorium's Wonder Emporium is good (especially Portman and Bateman, but not so much Mills), and the writing is essentially smart, so when the Wonder Emporium is revealed to be an overstuffed, overactive mess, it becomes clear that the real problem is in the direction. Helm packs every inch of every frame with so much information, there is no real way to wrap our eyes around it all. It's one special effect piled on top of another, and for a lot of it, not even good special effects. Helm's intention is to make us feel that the toy shop is a place where anything can and does happen, but instead it's purposeless chaos. This is probably why the film starts to get good when it leaves the store, and strangely, it gets even better once Mr. Magorium finally goes gently into that good night.

Except that's no solution, is it? If your movie is called Mr. Magorium's Wonder Emporium and it's more enjoyable without either Mr. Magorium or his Wonder Emporium, you've gone wrong somewhere. I can't say for certain whether or not kids will be fooled by Zach Helm's slick fumble, but I can definitely tell you that most adults are going to be bored. My gut says kids aren't going to really dig it all that much either. They are a lot harder to sneak one by than they get credit for. Plus, they don't do well with confusion. If anyone wants things to be black and white, one thing or the other, it's the young. By never deciding what kind of picture Mr. Magorium's Wonder Emporium is going to be, Helm ends up pleasing no one. Like the manchild he tried to portray, Helm's movie is too big to play with the kids, but not yet grown-up enough to sit at the big table.

Video:
As many DVD Talk readers will know, Fox is the worst studio when it comes to sending out early copies for review, because they send unfinished product that doesn't usually represent what will eventually land on store shelves. In the case of Mr. Magorium's Wonder Emporium, I received an early copy that not only contains an intermittent watermark, but with rampant image problems, including fuzzy resolution and pixilation during complicated effects shots. My guess is these problems will go away, and that the widescreen image will be as colorful and bright and as digitally marvelous as the filmmakers intended, but I can't say for sure. Thus, in our star system, I'll rate it at average and hope for the best.

Update 6/14/08: Oh, what a difference now that I have seen the final product! This movie is a perfect example of why these screener discs are such a bad idea as far as getting DVD reviews. While my opinion isn't changed as far as the story is concerned, the difference in picture quality makes me at least more impressed in the fantastic art direction and special effects in this movie. The studio should really do itself a favor and stop this practice of inaccurate review copies.

Sound:
As for the audio, I found nothing to complain about, even on my pre-release disc. The 5.1 English soundtrack sounded very good to me. The movie has many excellent sound effects, and I could hear them all.

In addition to the English audio, there are French and Spanish dubs in stereo, as well as multiple subtitle tracks for all of the spoken languages. 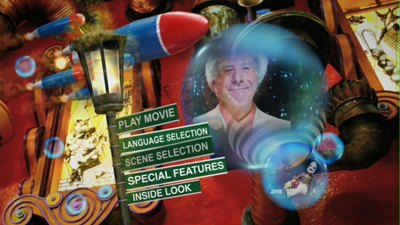 Extras:
There are multiple short promo featurettes that give us the lowdown on the behind-the-scenes magic that was employed to make Mr. Magorium's Wonder Emporium. For whatever reason, these are broken into two sets of four, though they just as easily nestle next to one another as they do sit apart, as all of the interviews are taken from the same sessions.

The first section is under the banner "Strangely Weird and Weirdly Strange: The Magical World of a Wonder Emporium," and its segments can be played straight through or individually. Together, they are a measly 6 minutes, 55 seconds. They are:
* "Supposedly the Mind of Zach Helm" - a piece on the writer/director
* "The Sock Monkey" - celebrating the puppeteers and their puppets
* "Mortimer the Zebra" - the travails of a real-life zebra on set
* "Lincoln Men" - building the Abraham Lincoln from Lincoln Log toys.

The other four films are playable only as individual pieces:
* "An Eccentric Boss and an Awkward Apprentice" (6:45) - profiles of Dustin Hoffman and Natalie Portman and their characters
* "To Meet Eric Applebaum, Start by Saying Hi"(7:00) - a look at the film's young star
* "The Magical Toy Store" (8:00) - building the set and creating the effects
* "Fun on the Set" (2:00) - the antics of the cast and crew.

The best of these are the behind-the-scenes elements, which include production sketches and work footage. It's all fairly standard press material, however, and doesn't run very deep.

In addition to five trailers for other DVDs for youngsters (none of the Mr. Magorium's Wonder Emporium trailers are included), there is 3-minute, 35-second "Inside Look" available on the main menu that turns out to be an extended clip of the upcoming animated Horton Hears a Who.

FINAL THOUGHTS:
Skip It. I want to go ahead and suggest that people rent Mr. Magorium's Wonder Emporium, but I can't bring myself to do it. I was just too bored with it. Had I gotten a little more involved in the story, felt a little more awe or even been affected by the pathos, I'd want to stretch farther to give Zach Helm a pat on the back for a nice try. He's a good writer who is very smart at creating metafictional cinematic texts, but in the case of his directorial debut, I think he's both too smart for his own good and maybe not smart enough. Mr. Magorium's Wonder Emporium tries to appeal to all sides, and it ends up falling in a middle that flounders under staggering mediocrity. His tale of a dying man and his magical toy shop dies without any of the promised magic. 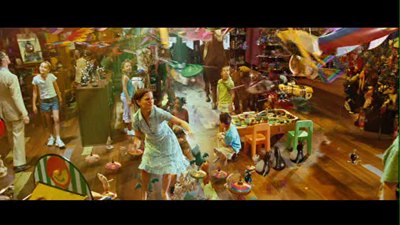