Mixing drama with humor Kurdish-French production Kilometre Zero (2005) draws heavily from the bloody legacy of Saddam Hussein. Religious and cultural clichés are questioned in a provocative fashion leading to an unperturbed happy-ending.

Making history as the first Iraqi film to be chosen to compete for the coveted Palme d'Or at the Cannes Film Festival Kilometre Zero transports its viewers to 1988 - a few months before Saddam Hussein will exterminate more than 180 000 Kurds using chemical weapons.

Ako (Nazmi Kirik), his wife Selma (Belcim Bilgin), their son, and his seriously sick father-in-law are concerned with the war raging in the region. Ako is ready to leave the country but his wife isn't willing to abandon her dying father. When the Iraqi armed forces enter town Ako and a group of fellow Kurds are asked to join them.

Stationed in a training facility far away from their village the Kurds begin to question the purpose of war. During a sudden air attack Iraqi soldiers are killed and Ako is ordered to transfer the body of an unknown "martyr" to his home. Unfortunately for Ako he is also asked to share a beat up military truck with an Iraqi driver whose tolerance for the "uncultured" Kurds is non-existent.

Aside from the heavy political overtones aimed at ridiculing the state order Saddam Hussein favored Kilometre Zero effectively rivals the bizarre pomposity of Kusturica's films. Off-beat humor and bitter drama are brought together very well allowing the viewer to experience the absurd reality those enduring the war in Iraq are faced with.

The fervent ethnic jabs Ako and his Iraqi driver exchange during their journey occupy a major place in this story. They bring forward many of the traditional misunderstandings between Arabs and Kurds though carefully downplayed with bits of humor. Nevertheless, the two sides and their prejudices are effectively addressed. 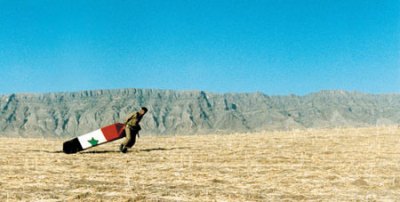 The cast is surprisingly good. The dialog appears to be largely unscripted and natural though occasionally the main characters appear suspiciously stiff. Still, the flow of the story is quite remarkable given that a number of the actors are amateurs lacking proper acting skills.

Presented in its original aspect ratio of 1.85:1 and enhanced for widescreen TVs the print for this release, as expected, has been improperly sourced from a PAL-master. As a result there is quite a bit of "ghosting". The colors aren't as lush and vibrant as I was hoping they would be and contrast is obviously affected by the manner in which the print has been transferred. The actual quality of the source is good: I did not notice any disturbing damage. Still, I am a bit disappointed that the Global Lens Series offers such unique films in such questionable packages.

Offering a Kurdish (with Arabic and French) DD track and optional English subtitles the film sounds good. The dialog is easy to follow and I did not detect any disturbing drop-outs or hissings to report here. It would have been great if our distribs would have kept the 5.1 track found on the French disc but it is what it is I suppose.

Aside from the Global Lens Series promo reel the only other extra feature is a DVD-ROM discussion piece.

I have seen every single film from the Global Lens Series published so far and I am yet to be disappointed. But I have to admit that the fact that these always come with an improperly sourced transfer is quite disheartening. With this in mind, if you have a soft spot for world cinema, I urge you to see Kilometre Zero. Not only it is remarkably fresh and well-acted but to the best of my knowledge the only contemporary feature from Iraqi-Kurdistan offered by a local distrib.