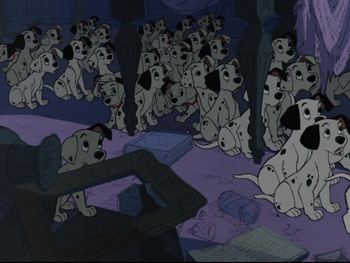 There are so many wonderful movies from the Disney animation "vaults," declaring any particular film "one of their best" almost seems redundant. Even so, 101 Dalmatians is most definitely one of their true, inarguable classics. It's become so iconic, it's even managed to survive the live-action remakes from the 1990s. Make no mistake, the original adaptation of the Dodie Smith novel is always the way to go. Nothing else compares.

For those who have been sleeping, a quick recap: Pongo (voiced by Rod Taylor) and Perdita (Cate Bauer) live in London with their "pets," newlyweds Roger (Ben Wright) and Anita (Lisa Davis). It's a meager existence, but the family gets by on love. There is so much love, in fact, that when Perdita births a litter of fifteen puppies, Roger refuses to sell them to Anita's loathsome college buddy, the sinister Cruella De Vil (Betty Lou Gerson). One does not give up family for any price.

The fur-obsessed Cruella is not stopped so easily. She sends two thugs to kidnap the wee ones, tossing them into a puppy pool with eighty-four other Dalmatian rugrats that are slated to be skinned and turned into coats. With the help of an underground network of animals all across England, communicating through an ingenious system of passing messages called the "Twilight Bark," Pongo and Perdita find and rescue their children and the other doomed dogs, returning home to their human pets with an even bigger family to adore.

When the old Disney team were on their game, they were capable of such incomparable cinematic wizardry, it's almost hard to believe they kept it up for as long as they did. Made in 1961, 101 Dalmatians (also officially known as the spelled-out The One Hundred and One Dalmatians) is the seventeenth full-length cartoon feature from the studio, and rather than skate by on an established style or repeat themselves, a whole new look was adopted for the film. This was both a technical change-up (there was a new Xeroxing process that changed how animation cels could be reproduced) and an overhaul of how things were drawn. The Disney version of London bears a striking resemblance to some of the finer magazine illustrations of the period. The detailed backgrounds have a loose line reminiscent at times of ballpoint pen, and the color palette is soft, leaning toward pastels. I often wanted to pause and just stare at the gorgeous backgrounds.

Not that the characters weren't interesting, too. Some of the dogs in this movie have more acting range than many contemporary Hollywood performers. The animators have a keen eye for body language and gesture, bringing all of their characters to life distinctly and believably. Of course, we all remember Cruella De Vil, the larger-than-life bad gal with a look and attitude inspired by Tallulah Bankhead. She is the personification of evil, and despite not being a musical, the villainess' theme by George Bren and Mel Leven is one of the most memorable in the Disney songbook. What I did not remember, on the other hand, was the marvelous detail of Cruella's second-hand smoke being yellow. She's so rancid, she even pollutes cigarette smoke! 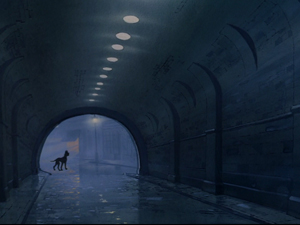 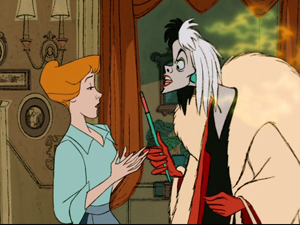 If I had to put money down, though, I'd say more than the beauty of the animation, 101 Dalmatians has stuck around due to the sophistication of the writing. There is a mature sense of humor in this movie that only becomes more apparent as you grow up with the film. The plot is also expertly executed, replicating the suspense and atmosphere of the best British war-time thrillers. If Michael Powell and Emeric Pressburger made Disney movies for adults, then 101 Dalmatians is a Powell and Pressburger film for children. Even the old farm-dog Colonel (J. Pat O'Malley) bears a resemblance to Colonel Blimp. Coincidence, most likely, but indicative of the deep well the filmmakers were drawing from.

I was grinning from ear to ear the whole time I watched 101 Dalmatians. It's probably been nine years since I've seen the movie, since I bought the original and long-out-of-print single-disc DVD, and it's so much better than I even thought, I can't even tell you. From the opening commentary on love and the way Pongo brings Roger and Anita together, I was smitten myself and knew I was in for a treat. This release of the new 101 Dalmatians - 2-Disc Platinum Edition is an auspicious event. You owe this one to yourself. Rush out to get it.

Video:
The new digital transfer of 101 Dalmatians is sublime. The image is framed at 1.33:1 aspect ratio, which was its original intended format despite some prints having been matted at a widescreen 1.75. This new disc works from the ground up as far as image quality, and there is not a flaw to be had in the entire 79 minutes. Beautiful color, sparkling resolution--the DVD is ship-shape from top to bottom. 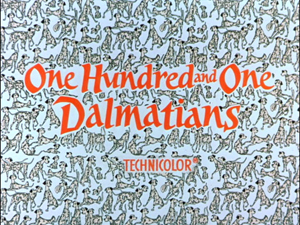 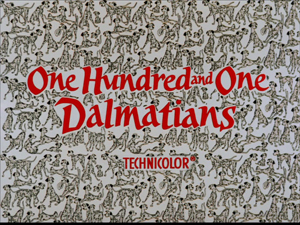 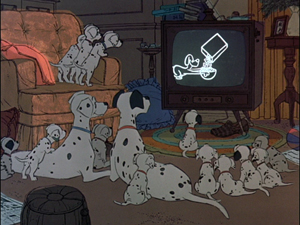 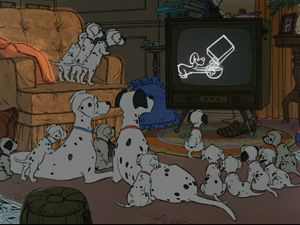 While the framing is the virtually same, I think the more vibrant colors and tones are immediately obvious.

Sound:
The audio has also been upgraded from a 2.0 stereo mix to a new 5.1 soundtrack. If you so desire, however, there is also a more standard version with the original theatrical audio recording. Personally, though I hate when contemporary mixes overdo it with an updated soundtrack, I found this mix to be warm and lacking in ostentation. It sounds like it was recorded yesterday, but without losing the original charm. Remarkable.

There are also French and Spanish language options (both 5.1), and you can choose which language you want the menus and film to run in when the DVD is loading. These options include both dubs and subtitles.

English subtitles are available for the deaf and hearing impaired. The trivia tracks can also be accessed with the subtitle button, not just through the special features menu.

Extras:
As the first of the DVDs in the 101 Dalmatians - 2-Disc Platinum Edition loads, you will get an initial menu asking you to choose what language you want the DVD to run in: English, French, or Spanish. Once you have chosen, the next thing you will see is a commercial advertising the Disney home video line. This can be skipped with your "next" button, taking you to your choice between Disney's automatic Fast Play option or for the Main Menu. Fast Play loads the movie and some of the extras as a continuous program, bypassing the menu, intended for parents who want to put the movie on for their children and walk away--though I've always suspected that the true intention was to make sure your kids watch the commercials. 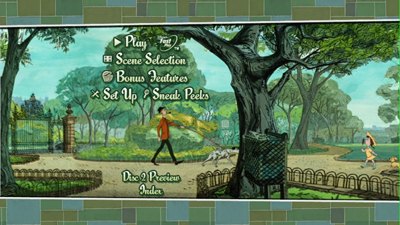 DVD 1 only has a couple of supplements, though there is a handy index available to show you what awaits you on the next disc. The two most substantial ones are two extra subtitle trivia tracks, one that has 101 pop-up trivia nuggets geared toward families, and one that has 101 pieces of info for the movie's more obsessive fans. There are also trailers on this disc, and a new music video featuring a performance of "Cruella De Vil" by Disney pop preteen Selena Gomez. The nicest thing I can say about that is it gives me a reason to trot out one of my favorite adjectives: execrable.

DVD 2 is where the mother load of the bonus features is to be found. As with most of the Disney discs, the supplements walk the line between features geared at children and features for the animation connoisseur--or, in this case, "dogs" and "humans." The younger, canine features tend to be activities, including two games that teach children to remember words and numbers. Here is also a DVD-ROM game where you can adopt and raise your own virtual Dalmatian. 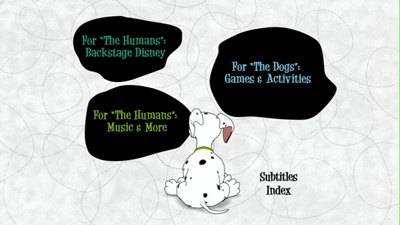 The adult extras are more substantial. These are broken into two sections. The first is "Music & More" and it has six musical numbers from the original planning stages of the story. There are three deleted songs, one of which even made it to the storyboard stage, and three alternate versions of songs that actually made it into the film, including two separate approaches to "Dalmatian Plantation," seven (!) of "Cruella de Vil," and several different ethnic, age-specific, and gender renditions of the "Kanine Krunchies" jingle (and bloopers!). These alternate versions also include different lyrics, not just different musical arrangements. The deleted scenes are illustrated with storyboards and production art, while the demos (excepting two versions of "Cruella") have only one screen each that explains what version you are hearing. Getting through them all at once is a test of endurance, but neat nonetheless.

The second section is "Backstage Disney," and it's all documentaries and production material. "Redefining the Line: The Making of The One Hundred and One Dalmatians" (33:50) is the longest and is the usual behind-the-scenes program. This documentary is further broken down into multiple shorter chapters. It rounds up surviving animators, descendents of production members, today's Disney staffers, historians, and voice actor Lisa Davis to talk about the history of the movie and the influence it had on them. The featurette begins with the origin of the story (the novel) and goes through production (illustrated with photos and art) all the way to completion. They explore the new Xerox pencil-to-cel process, and look at the craziness of painting all those damn spots!

"Cruella De Vil: Drawn to be Bad" (7:07) is cut from the same cloth as the other documentary, but focuses on the villain of the piece, the animator who created her, and the actresses who voiced her and provided live action reference for her. "Sincerely Yours, Walt Disney" (12:28) follows, and it dramatizes correspondence between Walt and author Dodie Smith using both readings and staged footage, rounding it out with clips from other Disney productions and from this one to show the development of the story and its context within the Disney library.

The last extras are 16 minutes of trailers, radio, and TV commercials from over the years and an extensive art gallery showing development work. The latter is always a favorite of mine on the Disney discs, and with a movie as stylistically innovative as 101 Dalmatians, it's no different this time around.

The DVD comes in a standard plastic DVD case with an outer cardboard slipcase. The interior case has a hinged extra tray so that there is a place for both discs. There are multiple paper inserts, including a coupon and advertising booklet that reveals a new edition of The Sword and the Stone and a few more contemporary sequels (including 101 Dalmatians II) are on their way later this year. Likewise, there is a DVD guide showing a diagram of the supplemental features that lets us know that Sleeping Beauty is due for re-release in the Fall and Pinocchio is finally returning to DVD in Spring 2009--both as regular DVDs and Blu-Ray discs.

FINAL THOUGHTS:
101 Dalmatians - 2-Disc Platinum Edition is one of those DVD releases that should be met with extreme enthusiasm by film fans. The story of two worried canine parents and the ninety-nine puppies kidnapped by the evil Cruella De Vil in order to produced spotted fur coats, 101 Dalmatians is a sophisticated thriller with humor and drama and a gorgeous animation style. The new double-disc release boasts an amazing transfer, with vibrant colors and astounding resolution. Added to this are a pile of bonus features, including extensive documentary explorations of the production and a splendid art gallery. I can't enthuse about this enough: Highly Recommended. 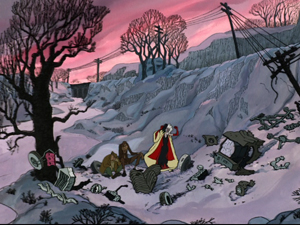 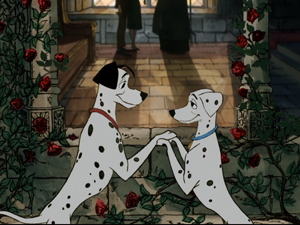