Monastery: Mr Vig & The Nun, The

An 82-year old man who has never known love is the focus of attention in Danish director Pernille Rose Grønkjær's "The Monastery: Mr. Vig & the Nun" (2006). A crowd and critics pleaser at top international festivals pic does entertain as much as it actually disturbs with its fresh look at faith and those who commit their lives to it.

Mr. Vig, a long-bearded man with unfashionably thick glasses, is on a mission to transform an old castle into a Russian monastery. He invites a group of Russian nuns and soon after the place assumes its new role.

But as time goes by more and more often the new occupants begin to disagree with Mr.Vig. Amvrosya, the new master of the monastery, is determined to have everything done and run her way, much to the displeasure of Mr. Vig. Is the monastery approaching its end?

A low-budget "documentary" shot over the span of approximately six years The Monastery: Mr. Vig and the Nun plays as a TV show where reality is anything but real. Here feelings, emotions, and words of wisdom are seen and heard through the prism of a religious bond which some may find odd.

Grouping together two strikingly different characters from different cultural and social backgrounds Grønkjær surprises with a genuinely charming story where humor comes in unusual shapes and forms. The clash of egos between Mr. Vig and Amvrosya for example prove that even amongst those who are typically seen as impartial to the common frictions between the two sexes odd tension thrives.

Thankfully, the comedic elements in this story do not disrupt pic's mostly convincing tone. The sincere reactions the confronting parties reveal are indeed quite contagious, forcing the audience to embrace both (surely an impossible thought fifteen or so minutes into the film). 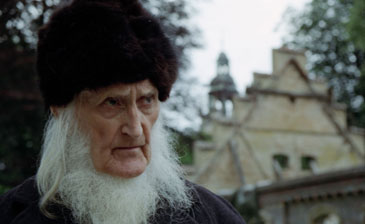 Technically pic is impeccably put together. The specific lighting and heavy grain enhance the spiritual look the story favors. The editing is equally fitting with calmness pervading throughout even when the main protagonists battle.

Presented in an aspect ratio of 1.85:1 and enhanced for widescreen TVs the transfer provided by Koch Lorber Films looks rather good, with the apparently low-key look and feel in tact. The image reveals heavy grain and occasionally an inconsistent color-scheme (more than likely a by-product of the dated material used to comprise the final product). With this in mind I also have my suspicions that this release might have been sourced from a PAL-master as I detected some very mild combing. In the grand scheme of things however I don't believe that one would be affected by it at all given the technical description provided above.

Presented with a Danish DD track, as well as bits of Russian and English, the audio treatment is very good. Dialog is clear and easy to follow though I must admit that the conversations between the Russians and the Danes will more than likely force you to use the optional subtitles given the heavy accents they reveal.

Aside from the original theatrical trailer, a gallery of trailers for other Koch Lorber Films works, and five deleted scenes which are not crucial to the story there is nothing else to be found here.

Aside from the humorous bits in this story the rest borders a type of eccentricity many may find impossible to endure. I certainly enjoyed the cultural clashes and what they initiated but felt quite indifferent to the religious subtext which apparently is the heart and soul of this film.