"You who find this letter, you should know that my hapless wandering lives on in you." 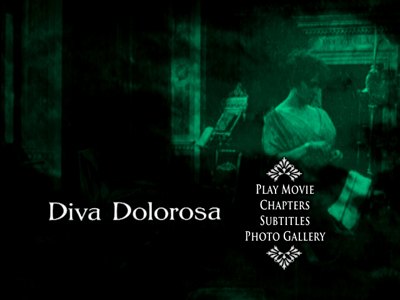 In another of his short films collaged from "found footage" rescued from aging silent movies, Dutch filmmaker Peter Delpeut pays tribute to long forgotten Italian film actresses who celebrated the gaudy philosophy of the fin de siecle in a spate of pictures spanning from 1913 to 1920. Diva Dolorosa is named for the "dolorous diva," an independently minded woman of passion who was the heroine of Black Romanticism, an artistic movement that was preoccupied with the ironic contradictions of humanity. They believed there was no life without death, no beauty without ugliness, and no fiery passion that would not eventually run out of fuel.

The trend that Delpeut spotted in these old films was that the sensuous woman always attracted attention, and as a result, she had to be punished. The other women she made jealous would want to see her brought down for her flagrant disregard of social mores, while the men she seduced could not accept not having her all to themselves. That, and given the heat the diva gave off, they had to let go before they suffered permanent burn scars. Call her a precursor to the femme fatale.

In this 70-minute film, Delpeut strings together a story of this seductive force, editing the rise and fall of these dangerous beauties in rhythm with a new score by Loek Dikker. An operatic narrative emerges from the pile of clippings, from the first allure through the indulgence of lust and the madness that ensues. By cutting from movie to movie even within the space of a short scene, the director is suggesting that this is not the story of one woman, but a story of all women who dare to live within their own bodies. The tragedy they suffer is both individual and social, something that, in the incongruity of Black Romanticism, arises from within but is neutralized from without.

Though I have had less than favorable reactions to some of Delpeut's other movies, this 1999 effort hits just the right spot for me. The heavy emotion of the subject, as well as the use of music to drive the story along, retains the awesome power of the images without altering them to fit a greater agenda. In that sense, Diva Dolorosa does justice by the women it has come to praise. In this film, they have the freedom to just be themselves. 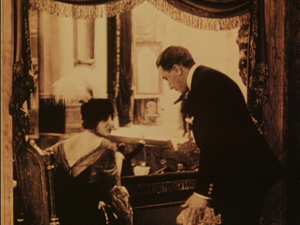 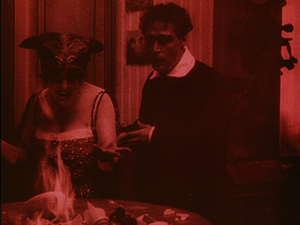 Video:
Diva Dolorosa is a full frame film. Given that the director is working from snippets of very old movies and his source material has often been left to decay in dark corners of cinema's past, not every clip is as good looking as others. That said, however, I see nothing in the Zeitgeist DVD presentation that adds any further digital problems to the image. On the contrary, it's a very good transfer, clear and crisp without any glitches.

Sound:
A basic stereo mix gives Loek Dikker's score the appropriate power. The music is free of distortion and has warm undertones. The intertitles are in Dutch, English, and Italian, with optional English subtitles.

Extras:
The only bonus on the DVD itself is a short photo gallery that identifies some of the source films for various memorable scenes in Diva Dolorosa. A more comprehensive list of the movies Peter Delpeut borrows from is also printed on the paper inert that comes in the DVD case. That insert also has credits and a chapter listing, a short statement from Delpeut, and a longer essay by Italian cinema expert Angela Dalle Vacche.

FINAL THOUGHTS:
Working with clips from Italian films of the 1910s, Dutch director Peter Delpeut has made Diva Dolorosa, a fevered tribute to the sensual stars of operatic cinema. An orgy of fin-de-siecle values, Diva Dolorosa expresses the conflict of Black Romanticism, in which happiness must be followed by pain. Thus, the free spirits of these divas can only remain free for so long. Passionate and overwrought with emotion, the score by Loek Dikker helps stoke the fires of these lusty ladies, ensuring that the film will at least burn bright all the way to its final act, even if the subject must be snuffed out. A few extra features might have been nice, particularly an exploration of how Delpeut does what he does, but otherwise a DVD that is Recommended for fans of silent movies and the roots of cinema. 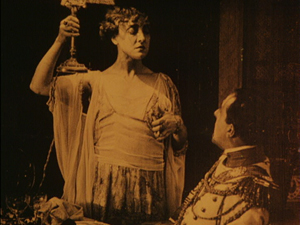 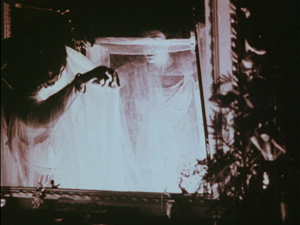