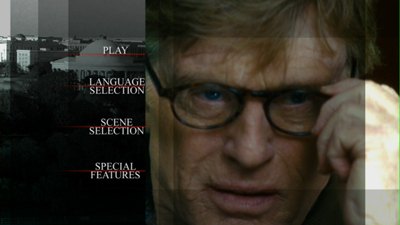 It's my belief that art should be allowed to reflect the times, and artists should have the freedom to stretch out and create material that touches on what is happening in the world around them. Thus, I have no problem with political filmmaking. I do, however, have a problem when a director wags his finger at the audience and let's the message of the picture get in the way of the film's primary function as story. This makes Robert Redford's Lions for Lambs a bit of a frustrating 90 minutes. For about 60 of them, the veteran performer is right on the money; for the other 30, his finger is so close to your face, you'll think you can lean forward and bite it off.

Screenwriter Matthew Michael Carnahan, who also stirred up some political storms with last year's The Kingdom, structures Lions for Lambs as a three-pronged polemic. The most successful of these run on concurrent time lines. In one, hawkish Republican Senator Jasper Irving (Tom Cruise) sits down with seasoned liberal reporter Janine Roth (Meryl Streep) to explain to her how the War on Terror is going to be turned around by a new offensive being launched from his office. New intelligence has revealed that Iran is letting Wahabi militants travel back and forth between Iraq and Afghanistan. By setting up surgical strike points on that path, they will stop the flow of troops and cripple the enemy once and for all.

As the politician and the journalist hash through these ideas, the actual mission has begun halfway around the world, spearheaded by Lt. Col. Falco (Peter Berg). The first special forces teams have entered Iran's airspace, only to discover that they were misinformed about the temperature of the hot spots along the way. After a firefight, two soldiers, one African American (Derek Luke) and one Hispanic (Michael Pena), are left stranded on a mountaintop in the snow. (Pena spends most of the movie pinned down, just like he did in World Trade Center.) It's a classic juxtaposition: what will fall apart first? The moral argument for action or the action itself?

Had Redford and Carnahan remained satisfied with this set-up, Lions for Lambs would be a totally different picture. These two story lines are both sufficiently compelling to make a complete film all unto themselves. The Cruise/Streep scenario in particular has some solid writing, letting the argument for and against the war play out in believable terms, with neither side being wholly right nor wholly wrong, nor completely blind to their own mistakes. Tom Cruise makes a perfectly plausible Senator, though anyone who has seen those bizarre Scientology videos he's in will have a hard time not hearing the "Mission: Impossible" theme playing while he makes his case for further aggression. Working one-on-one, he and Meryl Streep trade blows befitting their acting chops, and Redford keeps it simple, almost like filming a play.

Which is good, since when he lets the action get more complicated in the war zone, it appears he neither has the budget nor the skills to pull off convincing combat footage. The helicopters look like toys being bounced against a green screen. Yet, that's still not his major failing in Lions for Lambs.

It's that third prong that lost me as a viewer. In an ultimately superfluous narrative digression, Redford casts himself as Stephen Malley, a political science professor at a San Francisco university. Malley, or "Doc" as the kids call him, is pulling an intervention on spoiled-but-smart frat boy Todd (Andrew Garfield). The leathery prof sees the tan slacker--who wears a Hawaiian shirt for anyone who doesn't understand that he's been goofing off--as one of the best and brightest, and his recent downward academic spiral is unacceptable. He wants to convince Todd to engage, and as his example, he uses two of his previous students, two guys that took action for real--the very same soldiers currently under fire in Iran!

A Vietnam vet himself, Doc doesn't want Todd to join the army, but he does want him to jump in the game. Can he make the boy see that doing nothing is the worst thing of all? Can he make us all see? That's really Redford's point with this segment, to turn to his audience and lay it all out in the simplest of terms, just to make sure we get it. Though he does end up avoiding being smug about it, it is patronizing. What does this sidebar have to do with the real drama? Just the very idea of it puts too much pressure on our suspension of disbelief. It's too much of a coincidence that not only did those two boys get assigned to the same unit, but that they will be headed for the casualty list the very morning that their intellectual mentor is using them as the object lesson for the higher good. The fact that they don't die fast enough to make the news crawl and really drive the point home for Todd when he gets back to the frat house almost seems like a betrayal, like stealing the head from the hammer before Redford can deliver the final blow.

Robert Redford has always been a filmmaker with integrity, so I don't want to disparage the man. It's clear that his intentions were good, but Lions for Lambs strays woefully off course and does the last thing I'd expect from the director: it underestimates the audience. If I could cut out every scene at the college, I would still be able to get the point of the movie. Spoonfeeding is one thing, but doing it with such force that you knock my teeth out is unacceptable. 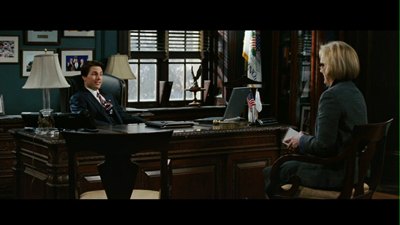 Video:
As regular readers of this site will note, reviewers here often complain about the advance discs Fox sends us to review. Lions for Lambs is another of those discs, and the fact that it is watermarked and likely of inferior quality to the retail edition makes it hard to review from a technical standpoint. The home base scenes--the material set in Washington and California--look just fine, but the nighttime action scenes were very dark. For more complicated effects shots with rapid editing cuts, there was also a lot of digital artifacting. One hopes this is not indicative of the actual release.

There are quite a number of compression issues on the bonus features, as well.

Video Update: As soon as I received the final product, I loaded it up and immediately went to the nighttime helicopter scenes. The blocky picture and the shimmering colors were gone, replaced by a crisp image, as it was always intended. Overall, the widescreen picture is a well-done 2.40:1 anamorphic transfer, and consumers looking to add Lions for Lambs to their collection should have no qualms about the disc quality.

Sound:
There are a few sound mixes available for your listening pleasure: English 5.1 in DTS, English 5.1 Dolby Surround, and both French and Spanish in Dolby Surround. I noticed no problems with these the way I did with the visual imaging.

Subtitles are available in English and in Spanish.

Extras:
Given the serious subject matter in Lions for Lambs, it seems like the kind of movie that would be ripe for bonus features, and Fox does deliver a couple. The leader of the pack is the full-length commentary by Redford. I expected this to be a detailed discussion, and he doesn't let me down. He talks about making the film, the choice to construct it the way he did, and goes deeper into his interpretation of the events he is showing and the ideas he is proposing. Someone should have reminded him that he'd have this opportunity to explain himself and persuaded him to leave the exposition out of the film.

After the commentary are a couple of documentaries. The first is "The Making of Lions for Lambs" (20 minutes, 45 seconds), and though it has some of the standard back-slapping that we expect from these over-glorified press kits, this one is more substantial than usual, as it deals with the ideas in the movie as much as it does the construction of the film. The piece goes from script to cast and on into the final stages of production. "From Script to Screen" is a much shorter piece (just over 8 minutes), made from the same interviews and material, and wholly redundant. Likely intended as a standalone short that can be shopped around as promo, its main thrust is the basis of the story, but it seems insubstantial next to the longer featurettes.

In addition to the teaser and the full trailer for Lions for Lambs, there is a seven-minute compilation reel celebrating the legacy of United Artists and several trailers for other films.

FINAL THOUGHTS:
A swing and a miss. Lions for Lambs comes in like the titular cats, but it should have tread its ground like the meeker lamb when it came time to communicate its main philosophical ideas. Directed by veteran filmmaker and star Robert Redford, this politically motivated movie overstates its point and underestimates its audience, which turns out to be its fatal flaw. As a drama about a debate between a politician and a reporter and how the abstract of their discussion plays for real on a battlefield, Lions for Lambs is effective agitprop, well-acted by Tom Cruise, Meryl Streep, et al., and well told. For that, Rent It. When it comes to the Redford scenes, however, get ready for some preaching. It's a bit much to take, despite an interesting concept overall, and ends up killing the effectiveness of this well-intentioned motion picture. 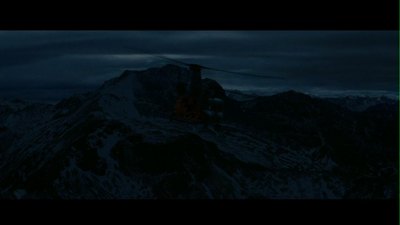