Arts Alliance America // PG-13 // February 26, 2008
List Price: $19.95 [Buy now and save at Amazon]
Review by Stuart Galbraith IV | posted March 8, 2008 | E-mail the Author
Loosely adapted from Harold Gray's Little Orphan Annie comic strip, Annie was a blockbuster of a Broadway show. It won the Tony Award for Best Musical, ran in New York for 2,377 performances over nearly six years, enjoyed a gargantuanly successful series of national tours, and has been almost continuously revived all over the world, including Israel, Japan, and Zimbabwe. A charming, completely engrossing documentary, Life After Tomorrow (2007) interviews about 40 orphans and various Annies from the show: ordinary little girls swept into the glamorous, high-pressure adult world of showbiz only to be tossed back into anonymity when as they outgrew their roles. Alternately funny and poignant, Life After Tomorrow has a unique perspective on the culture of former child stars: by interviewing dozens of different women (now in their late-30s and early-40s) who were thrown together into the same environment playing the same parts and singing the same songs it's able to paint a highly-detailed insider portrait of life backstage. 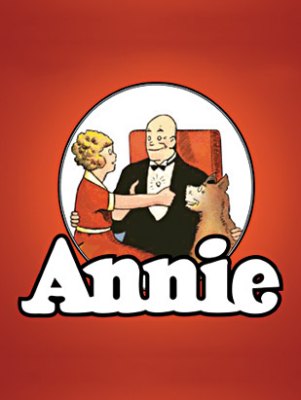 By today's grotesque standards of overproduction, Annie was pretty old-fashioned, a throwback even when it opened in April 1977. There were no Disneyland ride-like sets, no cutting edge Sondheim lyrics or innovative Bob Fosse choreography. Indeed, part of its charm was its relative unclutteredness and innocence, with Little Orphan Annie emblematic of a hopeful future during the depths of the Great Depression, a spunky streetwise kid who personally inspires Roosevelt's New Deal. In a sense, Annie was the Broadway equivalent of Star Wars, a feel-good retro show in which Annie's indefatigable optimism gradually brings hope to the cynical orphans and Hooverville-ites - and even grumpy industrialist Daddy Warbucks. Subtly, the show drew parallels to a cynical America still recovering from Watergate and Vietnam, not that the 1980s turned out any better.

All this was quite a contrast to the mostly appalling 1982 movie version of Annie directed by John Huston, a filmmaker not exactly known for his high-kickin' musicals. Beyond the fact that the movie suffered from some terrible casting and an elephantine production completely at odds with the stage version, it also totally distorted its basic philosophy: FDR, an agreeable caricature in the show became a buffoon in the movie while the songs "New Deal for Christmas" and "We'd Like to Thank You, Herbert Hoover," a wonderfully cynical number sung by homeless Hooverville-ites, were cut and replaced by new, unmemorable ones. It was like the show had been taken over by Fox News.

Also lost in the film was what had so captivated audiences who had seen the show: Annie and the orphans. Musical numbers in movies allow for multiple takes and are pieced together from short bits of film and prerecorded songs - but on stage the little girls really dazzled audiences with their professional singing and dancing and, if something went wrong, the occasional ad-lib. Audiences loved the show but if you asked them who played Daddy Warbucks or the evil Miss Hannigan (who runs the orphanage with an iron fist) they probably couldn't tell you: the little girls stole the show. Tellingly, the most famous of the Miss Hannigans, Dorothy Loudon, is said to have genuinely disliked the children, and one interviewee recalls the veteran's pettiness (without actually naming her): she'd really hit the kids onstage.

Thirty years later, the girls are now wives and mothers, and in some cases still trying to recapture the narcotic excitement of life with Annie. Several became minor or major celebrities on TV, in pop music, TV journalism, and movies. Among the ex-Annies and orphans are Sarah Jessica Parker, Danielle Brisebois, Allison Smith ("The West Wing"), Martha Byrne ("As the World Turns"), April Lerman ("Charles in Charge"), and Dara Brown (an MSNBC anchor). Other veterans not interviewed for the documentary but appearing in archival footage and stills include Andrea McArdle (the original Broadway Annie), Aileen Quinn (the movie Annie), Molly Ringwald, and Alyssa Milano. Not that they're missed; some of the best comments come from long-retired child performers.

Their stories are funny, sad, and occasionally surreal - like the fact that after performances some of the girls liked to hang out at Studio 54, or that creepy fan types would show up at the stage door with handguns and promises to "protect" them from harm. They talk about the sacrifices their parents made sending their kids on the road and staying behind, or abandoning their jobs to tour with them. They express with honesty and intelligence the bewildering pressure of sudden fame and adult obligations and the heartbreak of losing it all so suddenly when they were inevitably cut from the show. The film was co-directed by one of the Annie orphans, Julie Stevens (with Gil Cates, Jr., son of the longtime Oscar show producer), and she obviously infuses the film with the deeply personal touch it needs, pulling stories out of former colleagues who could relate to her.

Mainly, it's a portrait of little kids suddenly thrown into an adult world and given adult responsibilities, how some grew up too fast and some couldn't hack it. They'd watch with bemusement as chorus boys made out backstage (What's that? Men kissing? On Broadway?) and run around the hotel because their tutor was busy smoking pot in the bathroom.

All these years later, emotions still run high though most of the interviewees have an admirably healthy perspective on things. One definingly bizarre, bittersweet story finds one of the suddenly-put-out-to-pasture girls a freshman in high school, where their drama department is staging - you guessed it - a production of Annie. She doesn't want to act in it, but volunteers to help behind the scenes. They turn her down.

Happily though, the vast majority of women now approaching middle age look great and well-adjusted and for fun some of them reunite occasionally to run through the old act, choreography and all, purely for their own amusement. It's a genuinely sweet thing to see, not at all the embarrassment that it sounds like it'd be.

The show is further supported by interviews with composer Charles Strouse, director Martin Charnin, and actor Harve Presnell - and lots of great archival clips, including backstage excerpts from a famous Prime Time Saturday special, The Merv Griffin Show, and even Sarah Jessica Parker singing "Tomorrow" on a Bob Hope special.

Life After Tomorrow is something of a disappointment on DVD. It's matted widescreen (about 1.66:1) but presented in a flat 4:3 widescreen transfer. Otherwise, the image is okay, though some of the interview footage is a little digitally at times. There are no subtitle options though the disc is closed-captioned. The stereo track is modest but adequate.

Supplements include extended interviews as interesting as material that made it into the final cut, and an unusually good annotated slideshow, and trailer.

If you never saw Annie on Broadway or during one of its myriad tours then perhaps the charm of this wonderful documentary will escape you. If you have fond memories of the show, however, this is guaranteed to delight. Highly Recommended.