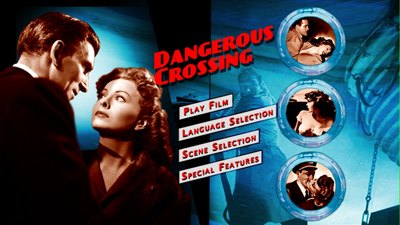 Falling somewhere in the middle distance between Hitchcock's The Lady Vanishes and Jodie Foster's Flightplan, the 1953 thriller Dangerous Crossing is another tale of a perilous journey where someone disappears into thin air and only one person even remembers him existing.

Jeanne Crain is Ruth Bowman, formerly Stanton, a newlywed who boards an ocean liner with hubbie John (Carl Betz) to honeymoon abroad. Once the ship has sailed, however, John is nowhere to be found, and no one but Ruth remembers seeing him. Adding further frustration is the fact that though Ruth insists they checked into a larger room as a couple, the ship has her booked in a different room as a single passenger, and under her maiden name to boot. The ship's doctor, Paul Manning (Michael Rennie), takes Ruth under his care, but he becomes too confused by his attraction to her to know for sure if she's telling the truth or merely delusional. Late-night phone calls from John warning Ruth of trouble are no help, nor is the fact that the nuptials were so quickly arranged, there is nothing to verify that they even happened, not even a ring.

Ruth sees trouble around every corner. So much so, you'd be forgiven if you mistook the pleasure cruiser for a fishing trawler casting a wide net for red herring. There is the gay divorcee who warned of lost husbands, and the leering steward and his inappropriate innuendos. There is also a little post-War paranoia, with the creepiest suspect being a German-accented man with a limp. Even the audience has some reason to doubt Ruth. We've seen John, but her whispered inner monologue makes us wonder if maybe we're not part of her persecution complex.

Directed by Joseph Newman, and based on a story by mystery writer John Dickson Carr, Dangerous Crossing may be the 24th entry in Fox's newly exhumed Film Noir series, but purists will find that definition stretched a bit to include this title. Though Newman does imbue the ocean liner with an atmosphere of dread, with its endless corridors, foggy decks, and even the occasional, subtle up-and-down shifting of the frame to simulate the queasiness of sea travel, he doesn't take full advantage. Dangerous Crossing lacks the hardboiled edge or blackened morality that is normally found on noirish streets. Plus, some of the more seasoned purveyors of the genre with a stronger sense of the grotesque would have never thrown a Halloween party on board without using masks and hidden identities to take advantage of the noir theme of reinvention. It's like Mr. Arkadin put on one of his costume parties and everyone showed up in their regular clothes.

Yet, if you're not bugged by misplaced tags and want a solid black-and-white suspense film, Dangerous Crossing should do the trick. Jeanne Crain makes for an excellent losing-her-mind heroine, and the script should keep you guessing right up until the big reveal. 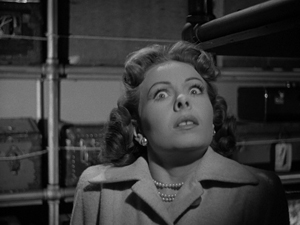 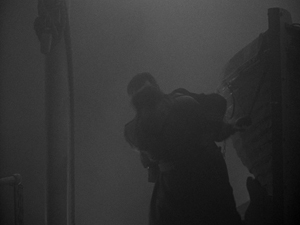 Video:
Dangerous Crossing is a full frame film transferred to DVD at a 1.33:1 aspect ratio. The black-and-white picture has been cleaned up nicely. I didn't notice any scratches or dirt, and the resolution of the image is fairly sharp. There aren't a lot of heavy blacks, as most nighttime scenes are full of fog and smoke, but the dark values are pretty good regardless.

Sound:
The Dolby mono mix is a touch too quiet at times, and it took me a little bit to get my volume adjusted to my satisfaction. Beyond that, though, there is no distortion or extraneous noise, and the track is decently balanced.

Subtitles are available in French and Spanish, as well as English for the deaf and hearing impaired.

Extras:
As with all of the Fox Film Noir series, a nice four-page insert is included that gives background notes alongside images from the film and a chapter listing. I don't understand, though, why this flimsy sheet was sealed on the inside with two gobs of that gummy rubber cement. There is no need to fasten it together, and just opening it up to read it threatened to mangle the paper. It was easy to get off once inside, but it was still overkill.

The bonus section on Dangerous Crossing is lead by two alternate audio tracks. One isolates the film score by Lionel Newman, and the second is an audio commentary by historian Aubrey Solomon, who has co-authored books about the history of 20th Century Fox. The music-only option is not simply a case of dropping out the other sound when the score is on, but it actually takes us back to the recording session, including conductor cues; the downside is the pauses between orchestral swells. Solomon's commentary is a comprehensive, scholarly overview, including background on the actors and what was happening in the movie industry at the time, in addition to facts specific to Dangerous Crossing.

"Peril at Sea: Charting a Dangerous Crossing" is a 9-minute featurette about the film with historians and Jeanne Crain's granddaughter, and it's a much quicker explanation of the film for those who may not want to sit through the whole commentary.

Finally, a stills gallery and an interactive version of the original press book sit alongside the trailers for Dangerous Crossing and several other releases in the Fox Film Noir line.

FINAL THOUGHTS:
Recommended. Dangerous Crossing is an enjoyable 1950s thriller about a woman who loses her husband on a honeymoon cruise. Full of mystery and suspense, made the most palpable by Jeanne Crain's tension-filled performance, it's a solid 76-minutes that should keep you on your toes. It's also pretty to look at, with fine black-and-white photography. Though not strictly a film noir, it does show that regardless of how much Fox stretches the definition, their Noir line usually delivers entertainment value. 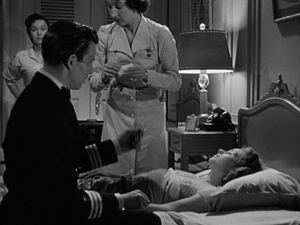 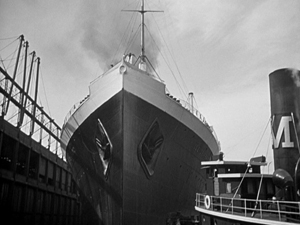