Pride of the Yankees - Collector's Edition 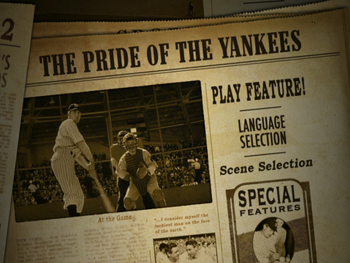 The Pride of the Yankees is the sports biopic by which all others are measured. Made in 1942, it stars Gary Cooper as Lou Gehrig, the legendary Yankees first baseman who played in over 2,000 consecutive games across a decade and a half before being forced to retire due to ALS, a deadly illness that is now more commonly known as "Lou Gehrig's disease."

The formula should be pretty familiar to all movie buffs by now: a boy grows up in the Bronx dreaming of playing baseball, his dream comes true, he learns the ropes and becomes a star, finds love, and then the final act. It's a set-up that has stood the test of time because its universality ensures that it will always work. In the case of Gehrig, he was enough of a unique character that the now cliché style (which this movie arguably invented) is barely noticeable. A straight shooter who was ready to chuck dreams of sports stardom to pursue a practical career, he only took the Yankees' offer for a contract so he he could pay for his sick mother's hospital bills. He continued to conduct himself in the same moral manner for his entire run as a Yankee, breaking records and inspiring millions. There are some famous anecdotes portrayed, such as hitting two homeruns for a boy in the hospital, and the romance between Lou and his wife Eleanor (Teresa Wright) is given center stage in the second act. The third act is taken up with Gehrig's illness, a climax with enormous pathos. When the disease starts to wreck havoc on Lou's body, you're going to realize how much you've come to care for the big lug.

Some elements of Pride of the Yankees haven't aged as well as others. The concoction of two warring reporters (Walter Brennan and Dan Duryea) who spend the years arguing about Lou's potential is kind of corny, and there are times when I found Cooper's "aw shucks" demeanor a little forced. These are minor bumps in the road, however, and easy to get past.

Pride of the Yankees really starts to get going when Teresa Wright enters the scene. The actress was to have her finest hour a year later in Hitchcock's Shadow of a Doubt, but she's an alluring presence in this film, bringing oodles of charm to the screen. The courtship of Lou and Eleanor is sweetened with a smartly pitched comic streak, and the relationship only becomes more delightful as the years progress and they become partners in the truest sense.

Director Sam Wood (Kitty Foyle) also knows when to dole out a good baseball scene or two. The best is the aforementioned World Series game where both Babe Ruth and Lou Gehrig had to come through for the sick child. Also quite good are the games where Lou is starting to realize something is wrong. In fact, it's a little backwards that the director is more adept at the struggle than he is the victory. Authenticity is added by the fact that Babe Ruth and many of Gehrig's other teammates played themselves in the picture.

Of course, Pride of the Yankees would be nothing without the last scene, the recreation of Gehrig's farewell speech to a stadium full of fans. Here is where Cooper's common-man restraint really pays off. He doesn't oversell it, doesn't try to stray outside of the humble parameters Gehrig set for him at the real event. It's a stirring moment, and one of the most memorable in movie history. The final shots of the player walking off the field are poignant and beautiful. There was nowhere to go from there, best to just fade to black. 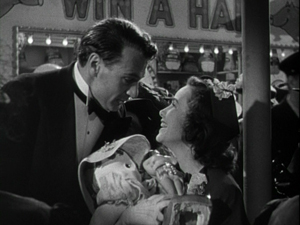 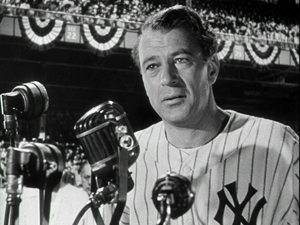 Video:
From what I can tell, there have been three other DVD editions of Pride of the Yankees before this Collector's Edition, including a 65th Anniversary Edition released less than a year ago. According to what I've read, that 2007 disc and its most notable predecessor, a 2002 release, are virtually the same outside of different covers, and the image quality was decent.

I am not sure if this 1.33:1 full frame transfer is a new one or not, but my guess is no. It's a fairly good looking old movie, with very little problems. You will see some graininess from time to time, as well as some background flickers, but the print is otherwise not scratched or spotty. There are a few obvious scenes where the source material is clearly not as good as the rest, but it's hard to say if this is a problem indicative of the disc or an ongoing issue with the prints.

So, essentially, if all you're concerned about is the movie itself and you are happy with the DVD you already own, never fear, you need not double-dip. This edition only appears to add a new clutch of bonus features, and you can read further down in this review to decide if these are something you will care about.

Sound:
There are three audio options available here: the original English soundtrack, and French and Spanish dubs. All three are in a Dolby mono format. The soundtrack is solid, without any distortion or static. The music is clearly rendered, and the dialogue is always easy to hear.

Subtitles are available in English and Spanish, as well, and there is Closed Captioning.

Extras:
There are six separate featurettes that have been created for The Pride of the Yankees - Collector's Edition.

* "The Making of The Pride of the Yankees" (8 minutes, 15 seconds): Anecdotes about the film's production, shared by Samuel Goldwyn Jr., as well as Richard Bann, a film historian, and Ray Robinson, a Lou Gehrig biographer.
* "The Man Behind the Iron Horse" (6:17): A talk with Robinson about his connection to Gehrig and a little biographical info.
* "What He Left Behind" (4:55): A tour of the Gehrig memorabilia at the Baseball Hall of Fame, many of which relate to the film.
* "Always - The Story Behind the Song" (4:55): About the writing of the tune sung while Lou and Eleanor are dancing in the film. Written by Irving Berlin, the featurette interviews his daughter as well as one of his biographers.
* "Lou Gehrig's Disease: The Search for a Cure" (5:50): The President of the ALS Association and others explains about the disease and the impact Gehrig had in regards to awareness of it.
* "Curt Schilling: A Legend on a Legend" (2:25): Schilling, a baseball player and ALS acitivist, shares his admiration of his hero, as does his son, Gehrig Schilling.

FINAL THOUGHTS:
As a quadruple-dip, The Pride of the Yankees - Collector's Edition is a pretty okay upgrade, and is Recommended on the face of its quality. A handful of short extras and a nice print make it a solid DVD. The movie itself is also quite special, a bonafide classic. More than a baseball picture, more than a sports biopic, more than a love story--it's all of these things. It's an American tale of a man who rises from nothing, achieves success, and who finds courage amidst tragedy. Gary Cooper is strong as the main character, and Theresa Wright is a delight. The Pride of the Yankees is a moving story about man's propensity for survival, well deserving of its status as one of the greats. 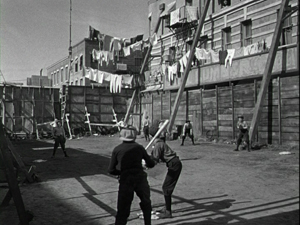 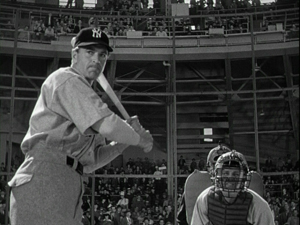