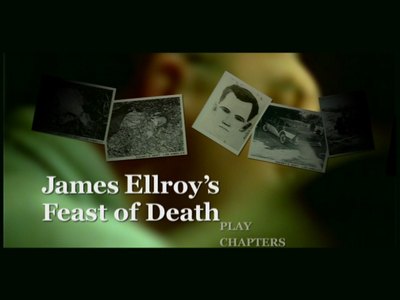 Eschewing the more standard biographical documentary format, James Ellroy's Feast of Death is far and away the best dissection of the man and his work that I have seen. Apparently kicking around since 2001, this film lowers itself like a bathysphere into Ellroy's dark oceans, looking at his life in a way that echoes the author's own methods, both objective and personal. Start with the facts, play with the fiction, and come to a conclusion based on both.

Ellroy is a notoriously grisly writer, and this movie is just as grim and unflinching. Director Vikram Jayanti (a producer on When We Were Kings) uses the author's own bibliography as his outline for Feast of Death, fixating on Ellroy's infamous fixations and combing over them with fresh eyes, the way a cold case detective would. Ellroy lead a similar investigation into his own mother's murder, reopening the 1958 police file in the mid-90s for his book My Dark Places. Jayanti takes us into this case and the effect it had on a young James. He tours Los Angeles with the writer and the police officer he partnered with, looking at places that Ellroy frequented as a boy as well as tracing a map of burglary and death across the California streets. Just like Ellroy's prose, it's both cold and vivacious, and utterly fascinating.

As books like L.A. Confidential will attest, Ellroy has an intimate knowledge of the Los Angeles Police Department, as well as a healthy respect for homicide detectives. Throughout Feast of Death, the movie cuts back to a dinner where Ellroy sits around with various detectives and journalists, hashing through the past and even going over the Black Dahlia murder case that inspired his book of the same name. He also travels with one of these police officers to Dallas to visit the site of JFK's assassination, the mythology of which Ellroy tore apart in his book American Tabloid. These are the events that drive the writer, that consume him, and they are the meat of the documentary. It's not entirely for the faint of heart. The discussions are peppered with gallows humor and uncensored crime scene photos, but even these provide insight into the kind of men that hunt killers.

Beyond the crime stuff, Feast of Death also tries to look at the other elements that inform the man, including a visit to his kin on his mother's side and a conversation/interview with Ellroy's wife. Amidst this is the prose itself, read by Ellroy for the camera, as well as his interaction with fans at a book signing. Ellroy the person is a walking embodiment of his larger than life characters. He is Bud White with a typewriter, more or less. He'd actually be pretty easy to parody, with his habit of howling and barking like a dog, but no one would be able to replicate his flair for colorful language. If they could, there would be more than one James Ellroy, and believe me, there isn't.

There is an end of sorts, a conclusion for the movie and a temporary one for James Ellroy the man. One of the points of the film, however, is that there is never closure, there is no way to shut the door on death, and despite presenting the most detailed explanation possible for something like the Black Dahlia murder, there is no way to know for sure if it is accurate. Ellroy's theory is that we were never meant to, we can only try to shine the light of truth in as many dark corners as possible, and if there is anything to be gleaned from his body of work, it's that he has always tried to do that, even if the light usually ends up reflecting back on him. 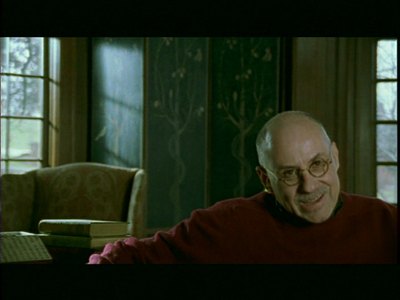 Video:
The 1.78:1 DVD transfer for James Ellroy's Feast of Death is well done, with clear resolution and good color values. It's not a fancy production by any means, but it never looks cheap.

Sound:
The 2.0 stereo mix is mostly pretty good. Sometimes the shifting audio of some of the real-life situations can be a tiny bit hard to hear, as the microphone is usually more attuned to James Ellroy than whomever he is talking to. This is nothing criminal, you just might want to run the movie slightly louder than you would normally.

Extras:
There are no bonuses on the DVD, though it does come with a 30% off coupon for four other Dark Sky Films, only one of which (Henry: Portrait of a Serial Killer) I had heard of prior.

FINAL THOUGHTS:
James Ellroy's Feast of Death is a pretty skimpy DVD, but it's one hell of a movie. If there were a little more by way of packaging here, I'd definitely be giving it higher marks, but until then, Recommended will have to do. For readers of the author's work or aficionados of true crime, James Ellroy's Feast of Death is must viewing. It shows us what it's like to search the dark corners of humanity for the men who skulk there, and how much darker it can get than we even know. The few riveting minutes of detailed theory about the Black Dahlia murder alone is reason enough to see this documentary, but the entire picture it paints of a driven and talented man is like no other. Dig in. 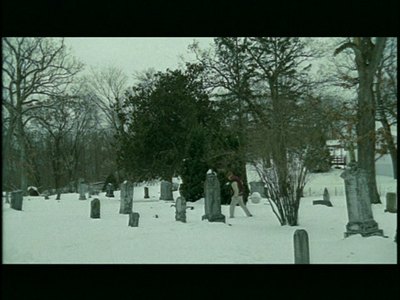