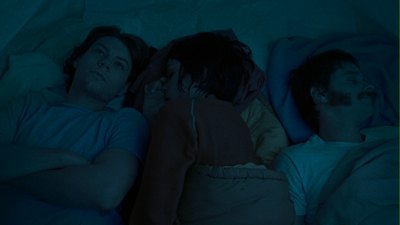 Dante put suicides in the middle of the seventh circle of Hell, but when Israeli writer Etgar Keret dreamed up his short novel Kneller's Happy Campers, he sent them to a purgatory all their own instead. In his fictional afterworld, those who have "offed" themselves are sent to a world very much like our own, only it's a bit broken down and the only other people who live there are the other suicides, returned to whatever life of drudgery they were trying to escape, incapable of smiling, forced to carry on. The next stop for the story was the graphic novel Pizzeria Kamikaze drawn by Asaf Hanuka, named for the pizza place where the newly deceased Zia finds himself working. This pizza parlor and Zia both make it to writer/director Goran Dukic's film adaptation, Wristcutters: A Love Story, along with many of the other elements from the quirky tale, even though the story has been slightly Americanized.

Zia, played with sad-eyed disquiet by Patrick Fugit (Almost Famous), slashed his wrists after losing the love of his life, Desiree (Leslie Bibb, Talladega Nights). Though he goes through the motions in his new existence, he hasn't escaped his pain, he still dreams of the time they were together. A chance meeting with an old friend (Jake Busey) leads to him discovering that Desiree also killed herself shortly after he did, and so Zia sets out to find her. Tagging along for the ride is his friend Eugene (Shea Whigham, All the Real Girls), a Russian would-be rocker who likes beer and the ladies, in no particular order.

Along the way, the boys pick up a hitchhiker named Mikal (Shannyn Sossamon, The Rules of Attraction), and a true road trip is born. Convinced that she has been subjected to this boring punishment by some mistake, Mikal is determined to find the People In Charge and get sent back to life. As the first person to really question the desolation they have found themselves in, Mikal starts to wake Zia up and force him to ask, "Is there more than this?"

I'm not a big fan of quirky for quirky's sake, particularly when it comes to precious little indie films that think they can skate by on their cuteness alone. Though it definitely strains under its own oddness as it progresses, Wristcutters: A Love Story is not possessed of a manufactured quirkiness, but instead carries with it the truly skewed worldview of the source material. Shot with an ever-present gray pallor, contrasted by the colorful flashbacks showing how each character departed, the film maintains the unique atmosphere of its rundown world throughout. Though the arrival of Tom Waits signals some third-act shakiness that includes a messianic sidetrip featuring a barely used Will Arnett, it's not enough to derail the sweet love story Dukic has had brewing in the earlier acts. (I've read the comic book, and these scenes feel labored in it, as well.)

I've always found Shannyn Sossamon to be a natural screen presence, and despite having to repress her irresistible smile here, she works well as the brassy ingénue who wins Patrick Fugit's awkward heart. Also good is Whigham, playing a loutish tough guy modeled after Eugene Hutz, the lead singer of Gogol Bordello and perhaps best known to film fans as the Russian guide in Everything is Illuminated. Given that the actors can't smile or show any outrageous reactions, their performances are all the more impressive in that they make the most of the limited tools they have left. It's a plight not dissimilar to the characters they are playing: accept the raw deal that's been handed to you and let it drag you down, or get on with it and make something of yourself. They make something of themselves.

Goran Dukic throws his lot in with his actors and keeps everything about the storytelling restrained, as well. He doesn't get hung up on explaining too much about the suicide Hell, nor does he overpopulate it with too many contrived details. His batting record isn't perfect, he does sometimes go too far (the auto mechanics, for instance), but it could have been a lot worse. Instead, he trusts his material and his cast, letting the dark humor simmer while the romance between Zia and Mikal blossoms at its own pace.

I have to be honest, I find Wristcutters: A Love Story rather difficult to classify, and that may the thing it has going for it most. As a black comedy, it's more black than comic, but not too definitive about either. As a love story, it's sweet but without being cloying. As a drama, it's got some heavy stuff going on, but it won't make you bawl your eyes out or want to slit your own wrists. Like the classic cult films it will likely be compared to, you'd have a hard time explaining it to your parents, and they'd use it as evidence that you're as weird and messed up as they think you are.

Wristcutters: A Love Story shouldn't click, yet it does in spite of itself. 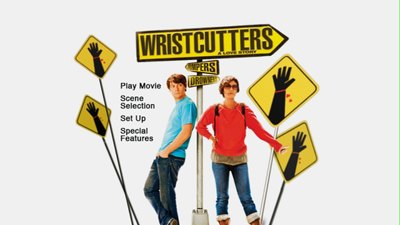 Video:
The 1.78:1 DVD transfer, enhanced for 16X9 televisions, of is pretty good. The movie is supposed to look washed out, but even with the sickly palette, there are nice touches that come through, such as the subtle glow in the actor's eyes. I didn't see any problems up until the final nighttime scenes, and then I was surprised that there was some combing and even a little bit of fuzzy grit. Looks like the quality control guy couldn't wait to run to the bathroom or something, leaving the film unattended for just a minute or two.

Sound:
The soundtrack has been given a 5.1 Dolby mix, and it has pretty good levels. I didn't catch any spectacular effects, but there was a decent balance between foreground and background. There are subtitles in English and Spanish, and also English Closed Captioning.

Extras:
An audio commentary with director Dukic, star Fugit, and producers Mikal Portnoi Lazarev and Tatiana Kelly is chatty and informative. With such a tight budget and on-the-fly shooting schedule, there are always good anecdotes about unexpected events (a dead body on the beach, an actor whose odd acting style comes from fighting laughter, etc.). Dukic also talks about some of the differences between the movie and the original story. (Note: Lazarev also plays Nanuk in the movie.)

There are three very short video features going behind-the-scenes of Wristcutters:
* "Making the Final Cut: The Wristcutters Journey": a standard EPK interviewing the director, producers, and actors Fugit and Bibb. Includes footage from the original camera tests with infrared color film stock.
* "Director's Storyboard Look-In": the climax at the Messiah compound with Dukic's storyboards laid over the top.
* "Patrick's On-Set Photo Gallery": a video slideshow of Fugit's own photos with music from the score.

Ten deleted scenes are mainly interstitial moments that are fairly complete, but that would have made the film more meandering. Of note is a long sequence where the boys meet the Arab cab driver they spot at the mechanics, which retains some of the politics of the Keret story. Also, more explanation about Mikal's accidental death that is best gone, as it oversells her innocence.

Several Lionsgate trailers, mainly for recent horror films starring Jessica Alba, can be played as a continuous program. They also play on their own as the disc loads.

FINAL THOUGHTS:
Recommended. Wristcutters: A Love Story is a bird of its own feathers. A bleak comedy about suicide may not be top of the order for a lot of people looking for something to watch on the weekend, but those who take a chance on Goran Dukic's cultish effort will find it's not everything they expect, and in fact is even a little bit more. Set in a netherworld where people who kill themselves are sent to do their penance, it follows three characters--the lovelorn, the bored, and the driven--as they seek to make sense of their plight, find love, and find the courage to shake off their old lives and create new ones. Yes, it's quirky, and yes, some may find its oddness forced, but I think Wristcutters is very comfortable with whatever tag you may hang on it. Well acted, smartly shot, and definitely enjoyable. 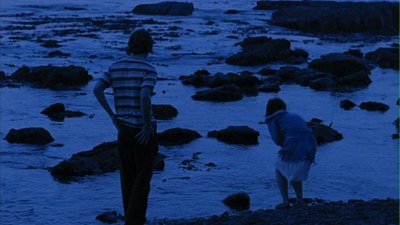