Dark and brilliantly-scripted Lamberto Lattuada's Mafioso (1962) delves deep into classic Italian misconceptions about the "superiority" of the industrial North over the "uncultured" South. Feeding off Alberto Sordi's marquee humor pic is unexpectedly convincing, its tone far more serious than it may initially seem.

An ambitious auto-inspector (Sordi) and his modern wife (Bengell) take a trip from Milan to rural Sicily where they plan on meeting relatives and friends. Upon arrival the man is introduced into a world of old cannons, favors, and family members with powerful friends living across the Atlantic. Shortly after the auto-inspector is asked to prove that he hasn't forgotten his roots.

Lamberto Lattuada's Mafioso is a film strikingly similar to Luciano Salce's Il Federale (1961). Both films use comedy as a pretext for a serious critique, both rely on the marvelous acting of iconic Italian comedians (Sordi in Mafioso, Tognazzi in Il Federale), and both end up with an open finale leaving the audience second-guessing. The only difference between the two is the recipient of their edgy humor - in Mafioso Lattuada aims at the rural South, or the prejudiced North if you will, while in Il Federale Salce takes a shot at the patriotic Fascists.

Not surprisingly both of those films are also incredibly well done detailed studies on Italian post-war mentality. Their main protagonists are men who were easily identifiable with ordinarily Italians struggling to embrace modernity while respecting "tradition". The characters played by Sordi and Tognazzi were incredibly temperamental, faced with complex dilemmas, and unable to stand on their own. With other words, the two were very much representative of the Italian state and those who were in charge of running it.

Strictly as an entertainment work Mafioso is far more effective than Il Federale. Its storyline is filled with wonderful improvisations by Sordi whose mimicking and sharp tongue are rivaled only by Toto. The obvious punches on Italy's fascination with food, women, and respect are undoubtedly very effective providing more than a few genuine laughs.

Produced by Dino De Laurentis and Antonio Cervi, two marquee for Italian cinema names, Mafioso is a stylishly looking film at times revealing unexpected panoramic vistas. Composer Piero Piccioni's (Lina Wertmuller's Swept Away) contribution is also crucial as it allows the story to effectively transition from humor to drama and back while Lattuada stays on course with his critique. 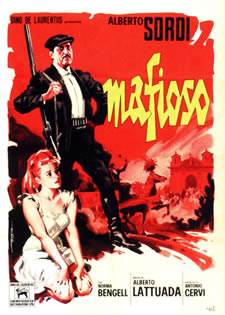 Presented in its original aspect ratio of 1.85:1 and enhanced for widescreen TVs Mafioso looks great. The print provided by Criterion is progressive, with an excellent contrast, free of debris/damage, and with a healthy dose of film grain. Edge-enhancement isn't an issue here and even when blown through a digital projector the image remains stable, with plenty of excellent detail. Indeed, there is hardly anything one could be unhappy with, Criterion deliver.

Presented with an Italian/Sicilian mono track and optional English subtitles the audio treatment is on par with the video. Dialog is very easy to follow and I could not detect any dropouts/hissing. Obviously, restoration work has been applied here as well given how notably crisp the actual soundtrack is.

This Criterion release offers a great looking and very informative booklet. In it you will find an essay by film critic Phillip Lopate titled Meet the Badalamentis! where he talks in great detail about the Italian film industry from the 1960s, its growth, social relevance, and evolution. Next, there is a second essay by Centro Studi's curator Roberto Chiesi, translated by Alison Dundy, in which he follows the history of Mafioso and in particular how the film compares to the works of other Italian directors with notable interest in depicting the Italian South. Finally, there is an excerpt from an interview with Lamberto Lattuada from Claudio Camerini's 1982 book dedicated on the director of Mafioso.

On the actual disc you will find an interview with the director of the film from 1996 titled Ritratti d'autore conducted by filmmaker Daniele Luchetti in which he talks about the history and reception of Mafioso. Next, there is a new collection of interviews with the director's wife, actress Carla Del Poggio (Variety Lights), and son, Allessandro Lattuada where they recall the director's intentions for the film and how it was made a reality. Finally, there are two theatrical trailers, Italian and US, as well as a gallery of promotional caricatures by artist Keiko Kimura.

A witty and genuinely entertaining film about post-war Italian stereotyping Mafioso is surely one of Lamberto Lattuada's best. The transfer by Criterion is, as expected, of top notch quality making my job here very easy: Recommended.