A meditative journey in the frozen lands of Mongolia Khadak bets on complicated symbolism and impeccable camerawork to tell a story with characters often impossible to deconstruct. Ambient soundtrack and prominent role for silence blend well with pic's moody tone and are surely going to impress those with a special appreciation for the work of Gus Van Sant.

Bagi (Batzul Khayankhyarvaa) is a young shepherd with a special gift - when he goes into catatonic fits his ancestors speak through him. He also sees, hears, and communicates with spirits ordinary people fear. When a local shaman (Tserendarizav Dashnyam) is summoned to enter Bagi's mystical world and guide him through the perils of the unknown the young man nearly dies. Shortly after the communist authorities order Bagi and his family to abandon their livestock and move to the city.

Khadak is a beautifully photographed film about change and manhood with unexpectedly engaging script. Mixing folklore, mysticism, and politics into a deceivingly calm collage of images its story is reminiscent of Walter Salles' The Motorcycle Diaries (2004). A journey with many unknowns is in the middle of a forced self-discovery leading to a dramatic finale.

A much publicized collaboration between Belgian director Peter Brosens and American Jessica Woodworth Khadak also carries a distinctively critical tone, one that does not shy away from addressing the mishaps the Soviets inflicted upon Mongolia. Scenes of extreme poverty, abandoned factories, and cheap dilapidated urban buildings are prevalent throughout the second half. The sense of gloom they promote is so overwhelming that even a startling love affair between Bagi and a local girl from the city isn't enough to lift the spirit up - everything and everyone here is doomed. 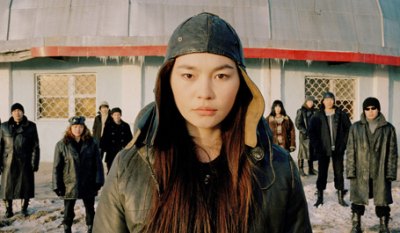 The first half of the story isn't as easy to read through. Bagi's leap into a world of unknown forces and mythical spirits is in harsh dissonance with the film's effective slam on socialism. For long periods of time silence, fractured by the disturbing wailing of the shaman, has a prominent role - misdirecting the viewer's expectations. Not surprisingly the transition to reality a.k.a socialism is abrupt, almost as if to remind that religion and spirituality were not a match for it.

Ultimately Khadak is a film that fires up in multiple directions. A surreal experience of images and words it adequately reflects the painful dilemma Mongolia is faced with: to plunge in an uncertain modernity or look back and re-embrace the safe but outdated cannons of the past.

Tech credits are impressive. Cinematographer Rimvydas Leipus provides pic with rich and lush vistas of the beautiful Mongolian steppes. Film editor Nico Leunen is also to be commended for his original treatment of raw footage which is the main reason why Khadak works incredibly well. Everything appears expertly done suggesting great potential amongst arthouse aficionados. 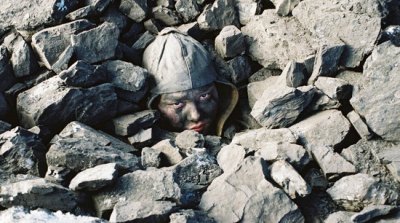 Presented in an aspect ratio of 1.78:1 and enhanced for widescreen TVs the print used for this release looks quit good. There is healthy dose of natural grain, colors are convincing, and contrast appears adequate. There are only a few specks I noticed on the otherwise very clean and good looking print. Edge-enhancement isn't an issue of concern even though I was able to detect its presence during a few scenes. My only complain here is the fact that the film has not been transferred progressively and there is some mild combing noticeable during selected parts. Still, this is a very healthy looking presentation which I would have no problem recommending to those interested in seeing Khadak.

Presented with a Mongolian 2.0 track and optional English subtitles the audio presentation is good. A more advance mix would have been welcomed give the film's truly impressive ambient score but as it is one can still appreciate the unusual approach to mixing Eastern tunes with traditional Western harmonies. Dialog is easy to follow and I did not detect any pop-ups or hissing.

The only supplemental material here is a Making-of which does not offer an insightful look into the film's complex message. It is comprised mostly of behind-the-scenes footage with a few, if any, worthy comments.

A rich and very complex story of transition, a boy becoming a man and a country heading into an uncertain future, Khadak is a marvelous looking film. There is an abundance of stylistic influences here easily traceable back to the works of Wim Wenders, Walter Salles, and Gus Van Sant. This is indeed a film of style with plenty of substance. Hence, I can not but highly recommend it to you.