Cats of Mirikitani, The 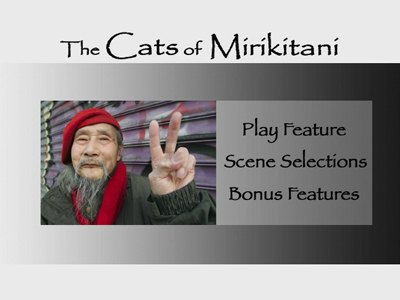 The Cats of Mirikitani is an unassuming documentary about an 81-year-old Japanese American artist and the experiences that inform his work and worldview. Filmmaker Linda Hattendorf met Jimmy in January 2001 when he was living on the streets outside a Korean grocery in New York City. He survived by selling his drawings to passersby. Many of his most popular drawings featured cats, but they also had other recurrent themes including depictions the U.S. internment camps in WWII, his memories of a childhood in Hiroshima, and Japanese visual motifs like persimmons and koi fish. After September 11, 2001, Jimmy moved in with Linda, and over the next nine months, she learned more about his life and helped him rediscover his identity.

Jimmy's story is a sad one, but his tenacious independence keeps it from being doggedly so. Born in California, he went to Hiroshima as a child to be educated, and then returned to California in 1937 when he turned 18, intending to pursue art rather than join the Navy like his father wanted. When the war came, Jimmy was taken to the camps and separated from the rest of his U.S.-based family. The Mirikitanies that remained in Japan were all lost when the atomic bomb was dropped. Like a large portion of the interned, Jimmy was persuaded to renounce his citizenship, and only after many years of struggle, was finally released.

Linda uncovers most of Jimmy's story just by letting the old man talk freely. Certain key events haunt him and come up time and time again, and his point of view takes on new significance in the wake of 9/11. The artist sees a lot of similar misdeeds to his plight during WWII in the nation's anti-Middle Eastern sentiments following the attacks on New York, and the distrust of the government these misdeeds have inspired has prevented Jimmy from taking advantage of the aid available to him. Through Linda's careful help and, at times, subtle manipulation, Jimmy discovers that his citizenship had actually been restored, reconnects with his only surviving sibling, and also discovers other prominent Mirikitanies.

Closure comes for Jimmy at the sixty-year reunion of internees at the Tule Lake camp where Jimmy had been imprisoned for over three years. Visiting the site again, he is able to make some peace with the experience and give tribute to friends he lost there. It's a touching moment that Linda Hattendorf wisely chooses not to overplay. I am sure there was some impulse to add a greater message to The Cats of Mirikitani, but the director avoids any intrusive narration or emotional contrivances. Jimmy's journey is enough all on its own. The collection of artwork he has been carrying with him on the streets eventually ends up on the walls of his own apartment, the artist having a place to display his work being a subtle stand-in for the man once again finding himself and the country he thought had given up on him. He even gets his own kitten, which he rescued from the streets he lived on only a eighteen months before. Life truly does go on. 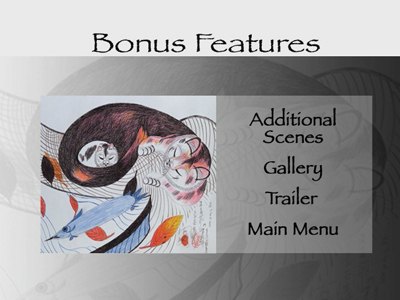 Video:
The Cats of Mirikitani is a full frame movie, shot on video. The DVD transfer is good, without losing any resolution or having problems with compression. It's a simple production and is thus presented simply.

Sound:
There is only one very basic audio mix, but it is decently done and the sound is clear and the people speaking are easy to hear. There are no subtitle options, though Jimmy is subtitled throughout the documentary due to his heavy accent and occasional lapses into Japanese.

Extras:
The DVD of The Cats of Mirikitani has a trailer for the movie, a two-minute video gallery of photos and Jimmy's paintings, and five deleted scenes. The deleted scenes are an extended interview with an art professor who has taken an interest in Jimmy's work and his specific expression of life in the internment camps, a reunion with his sister and the Bay Area family, Jimmy's first solo art show, and his return to Hiroshima.

FINAL THOUGHTS:
The Cats of Mirikitani is a no-frills documentary from a filmmaker that smartly sees when your subject is interesting enough, you need only put the camera on him and let him do the rest. Jimmy Mirikitani has seen the best and the worst that history has had to offer, and he has come through it all with his love of art intact. Through his expressive paintings, he hints at a greater story, and through the medium of film, Linda Hattendorf uncovers that story. The Cats of Mirikitani is both fascinating and touching, and is Recommended. 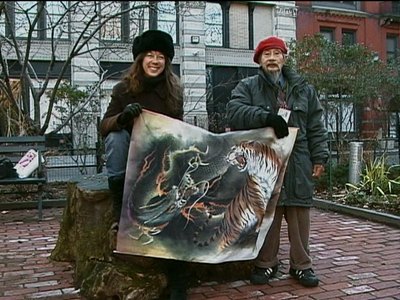