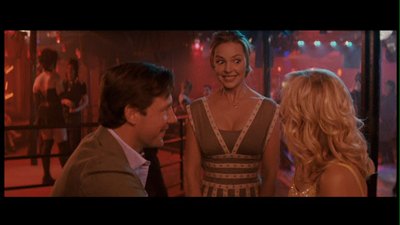 I like Katherine Heigl, I really do, and the idea that she might transition into doing fun romantic comedies is infinitely appealing to me. I'm all for it. That is, as long as she fires whoever advised her to make 27 Dresses. Seriously. She should put out a bounty for the head of the courier who delivered the script to her house, that's how bad it is. No jury would convict her.

From the director of Step Up and the writer of The Laws of Attraction, 27 Dresses is an abysmal rom-com about a young lady named Jane (Heigl) who is the perpetual bridesmaid and never a bride. In the opening scenes, she is actually the maid of honor at two separate weddings that she organized without ever confessing to the brides that this scheduling mishap had occurred. Instead, she jets back and forth between the soirees, changing her dress in the back of the cab so no one will catch on to her little ruse. Amazingly, only one person actually does, and gosh darn it if it isn't Kevin Doyle (James Marsden), the guy who writes those flowery wedding announcements she loves in the Sunday paper and who will naturally be the man of her dreams once she gets over how much she hates him.

The 27 dresses of the title are the fruits of Jane's bridesmaid labors, and they occupy a closet of shame in her tiny New York apartment. Jane has dreamed of her own wedding ever since she was a little girl, and she's holding out hope that George (Edward Burns), her hunky, environmentally conscious boss, will one day wake up and see how great she is and that she loves him dearly. In the real world, he'd most certainly notice Katherine Heigl or any other woman that buys him breakfast burritos without his having to ask for them, but in this wonderful fantasy, he is totally blind to her charms. Instead, he notices her sister, Tess (Malin Akerman), a shallow model who lies and tells George everything he wants to hear, how she's a vegetarian who likes to hike and other dumbass details, and so the big dope falls for her and proposes marriage.

Meanwhile, Kevin is secretly writing an article about Jane's addiction to weddings while openly encouraging her to stand up for herself and kind of falling in love with her. I'm sure you can guess where everything goes from there. 27 Dresses is infinitely predictable--and not in the "comfort food" sense, where you enjoy it for its safe and unpretentious choices. There isn't a scene you can't see coming in the first five minutes of this witless movie, and when those scenes do come, they arrive with a dull thud. Seriously, there is even a sing-along moment where Kevin and Jane bond by belting out "Benny and the Jets" in a podunk bar, because ever since My Best Friend's Wedding, every bridal comedy has to have at least one chorus line.

It's hard to explain adequately how mind-numbingly dumb 27 Dresses is. The comedy is about as fresh as the slice of wedding cake your grandmother has been keeping in her icebox since she got hitched when granddad got back from the war. High-concept gags spun off of Jane's dresses include all kinds of hilarious punchlines about how Asian people are short and Los Angelinos dress skimpy. Dialogue-based jokes are no better, like when George refers to running out on the baseball diamond to "shag some flies," and when he calls for Tess to come out, too, she responds, "Are we going to shag now?" You see, because he meant catch some baseballs, but she doesn't know that "shag" is also slang for sex. Hilarious!

Most of the actors sleepwalk through the movie, turning in fine but thoroughly average performances that even in their adequacy are too good for the material. Judy Greer stands out as she always does, playing Jane's slutty best friend, but even she can't save the few scenes she is in. Katherine Heigl is really gung-ho and does her best to make it work, and I still believe that with the right script, she'd be an awesome rom-com leading lady, but there's no digging herself out of 27 Dresses. This is one match-up she should have left standing at the altar, shouting out a clear and distinct "I don't!" as she ran from the church and into the waiting arms of a screenplay deserving of her talents. 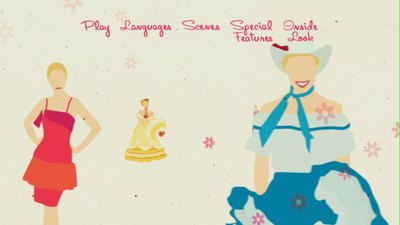 Video:
20th Century Fox sent an advance copy of 27 Dresses that, if past experience holds true, is not indicative of the final quality of the retail release. Though it has the menus and extra features that will be on the normal copies, the movie's anamorphic widescreen transfer is intermittently water-marked and often suffers from substandard importing. 27 Dresses is not the worst advance screener I've seen, it only has a few moments of fuzzy resolution and one glaring instance of severe pixilation; the bulk of the film is actually decent looking. I am sure the shrink-wrapped copies that will land on store shelves will have fixed these problems.

Update 6/14/08: Fox finally sent along the full retail copy of 27 Dresses, and sure enough, the problems I saw earlier appear to be fixed. The film is appropriately bright and frothy, matching in look what it tries to achieve in tone with the story. It won't knock you out or anything, but it is up to the standards you should expect from a big studio release.

Sound:
Unlike the image quality, the Dolby 5.1 English soundtrack sounds like it should. The volume levels are really good, and everything is distinct and clear.

There is also a French dub of 27 Dresses mixed in 2.0, and subtitle options in English and Spanish.

Extras:
Part of me is sad that there is no commentary on 27 Dresses, because I would love to hear an audio track where the people responsible spend 107 minutes apologizing and explaining what went wrong. I know that is a silly dream, however, and that even if there was a commentary track on this DVD, the participants would talk about 27 Dresses as if it were The Philadelphia Story, so I thank the powers that be for their mercy here.

Excepting that, we do get four mini featurettes about the movie, promotional snippets with the cast and crew and on-set footage:
* "The Wedding Party" (14 minutes, 30 seconds): Your standard overview of the production looking at the people involved and discussing the story, such as it is.
* "You'll Never Wear That Again" (6:45): Designing all of Jane's bridesmaid outfits.
* "Jane's World" (4:40): Production design, including the challenges of shooting in Rhode Island and pretending it's New York.
* "The Running of the Brides" (5:10): A small segment on the annual sale at Filene's Basement, where wedding dresses are put out on big racks at huge discounts. Prospective brides line up outside and make a mad dash for the taffeta once the doors are opened. It's pretty crazy.

Three deleted scenes totaling about four minutes finish off the movie-specific extras. In one, we see what would have been the bridesmaid dresses for Tess' wedding to George, and in another Jane narrowly saves George's dog from getting gassed when he left the mutt in Tess' care. The third is a complete vanity inclusion. It shows Jane hailing a cab and having the cab stolen by another woman, and it would likely have not been included had the woman not been the director of the movie.

The trailers section has four spots for other Fox DVDs and one for the Fox TV network. The 27 Dresses trailer is not included.

In addition to the special features, there is a two-minute "Inside Look" at the Ashton Kutcher/Cameron Diaz vehicle What Happens in Vegas... that actually looks like it might be worse than 27 Dresses, if such a thing is possible.

FINAL THOUGHTS:
Is it any surprise at this point that my advice on 27 Dresses is to Skip It? I give Katherine Heigl credit, she manages to still be charming in a complete bucket of crap, but not even her moxie is enough to warrant a rental of this dreck. Cobbling together every romantic comedy cliché imaginable, 27 Dresses is the story of the mousy girl who never does anything for herself seeing love snatched away only to find it again in the most unexpected place. Shock, horror, surprise! Lacking in any intelligence or anything even possibly funny (nope, didn't laugh once), RSVP a big fat "NO" to this DVD. 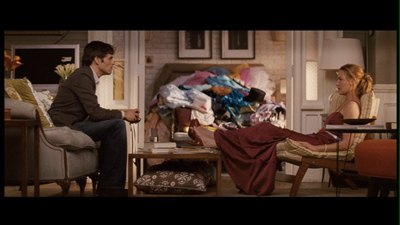