Rabbit is Me, The

A wry and apparently too revealing for the ex-GDR communist elite film The Rabbit Is Me (1965) is yet another excellent offering from the ongoing collaboration between First Run Features and ICE STORM/DEFA. Banned for over twenty five years in 1990 pic was granted the honorable FIPRESCI and INTERFILM Awards at the Berlin International Film Festival.

A young woman's (Angelika Waller) idyllic world collapses with a bang when her brother is arrested for propagandizing against the Party. She unexpectedly falls in love with a man (Alfred Müller) who turns out to be the judge responsible for her brother's troubles. Faced with an impossible dilemma the woman begins to see the world around her differently.

Loaded with political innuendo and at times impressively bold jabs at GDR's political elite The Rabbit Is Me is very much a film whose destiny appears to have been predetermined. In it humor, satire, and romance are nothing more than a pretext for a bold statement of discontent. Mixing elements that would become trademarks for the Czech, Polish, and Hungarian "New Wave" movements - stripped of glamour storytelling with distinctive political overtones, critical analysis, and complex characters often conveniently placed in absurd situations - pic plays back and forth between a romantic drama and a hilarious tale with a suspiciously linear progression.

The true value of this film however lies in its notably detailed account of the political system GDR employed. The sense of emptiness that oozes even through the most intimate of scenes is remarkable. Making love, being in pain, caring, are always felt and seen as a byproduct of the "expected" behavior GDR citizens were encouraged to reveal. As if to remind its viewers how tightly controlled the entire country was The Rabbit Is Me grants politics a major role in practically every frame of its story.

Perhaps the most controversial scene in this curious East German film is during its second half where a drunken worker is judged by his comrades for a controversial act of disobedience. While the actual "verdict" is nothing to be impressed with the manner in which it is delivered is absolutely shocking. Frame by frame the film exposes the exact formula according to which the communist regime dealt with those who dared challenge its superiority. 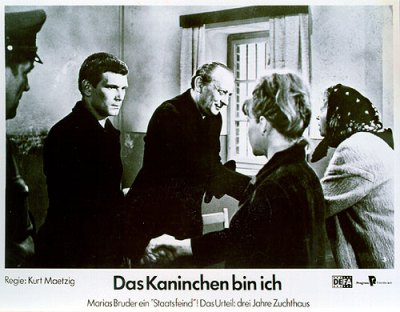 Analyzing how far communist cinema was allowed to push the envelope is truly fascinating. With the main characters in The Rabbit Is Me being as transparent as possible the story leaves very little room for hastily done criticism. As a result the romance, character progression, and eventual finale are all easily predictable. Where the viewer is left guessing what the director's true agenda is are the moments where seemingly out of context remarks, quotes, or off-kilter humor, provide a different reading on everything that takes place on the screen.

As it has been the case with all of the previous releases from the DEFA catalog The Rabbit Is Me appears to have been sourced directly from a PAL master. The needed adjustments for such a conversion however have not been done and as a result you should be able to notice a mild "ghosting" throughout most of the film. The good news here is that the actual print appears to be in quite a healthy condition with contrast in a generally acceptable form. The softer look which PAL-NTSC conversions reveal is certainly here but it really isn't as concerning as I have seen in other releases. With this in mind the actual print also appears healthy: there aren't any damage marks, specks, or irritating scratches. To sum it all up even with the few issues described above I am more than happy that this East German production has actually made to the US market. (Please note that the disc always you to choose your own interface, German or English).

Presented with a mono German track and optional English subtitles the audio treatment is very strong. Dialog is crystal clear and very easy to follow while the English translation is practically impeccable. I did not detect any pop-ups, hissing, or cracks to report here. The German producers appear to have treated this film with the needed respect.

As it is the case with most every release from the DEFA catalog this disc offers plenty of valuable supplements. First, there is an interview with the director of the film Kurt Maetzig in which he recalls the fate of his film, the political climate at the time of its premiere, and the events that led to his banning. The specific comments Mr. Maetzig provides are indeed very telling as he was a member of the Communist Party as well. Next, there is an old with Hans Bentzien, GDR's Minister of Culture, who talks about the general climate in the country at the time the film was completed. He spends a great deal of time explaining the reasoning behind the cultural stagnation reining in GDR during the early 60s. Next, there is the documentary "Banned - DEFA Film and the 11th General Assembly, narrated in English, which offers an even more detailed account on the political process in the GDR at the time. Finally, in addition to a gallery of still there is a text-essay titled "The Rabbit Is Me and the banned films of 1965-66" in which a great deal of information is offered pertaining to specific East German productions that were affected by the new censorship winds at the very top echelons of the Party.

First Run Features continue to offer remarkable films to the North American market. The distrib's collaboration with ICE STORM/DEFA (and the Film Library at the University of Massachusetts-Amherst) has given American cinephilles the rare opportunity to see and study films that nowadays appear to be the only cinematic reference to a country which no longer exists. The DVD presentation does have a few minor issues but the sheer fact that this film is now available on DVD is a good enough reason to recommend it.