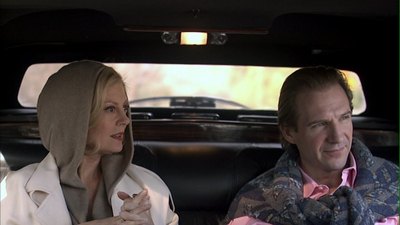 The relationship between a woman and her butler is a sacred thing, one that no outsider should stick his or her nose in. And if Bernard and Doris is anything to go by, when it came to tobacco heiress Doris Duke and her faithful manservant Bernard Lafferty, no one did.

I am sure there is an interesting story here. It definitely looks good on paper. The film opens in the mid-1980s, nearly sixty years after James Buchanan Duke died and left his thirteen-year-old daughter his considerable fortune. As we learn in the neat history lesson told through newspapers during the opening credits, the media dubbed her the "richest little girl" in the world, a tag she soon tired of. By the time Bob Balaban's film catches up with her, Doris (Susan Sarandon) is sitting atop one of the most lucrative empires in the world. Thus, she need think nothing of firing one butler for serving her melon too cold and having the butlering agency send another.

Bernard Lafferty (Ralph Fiennes) immigrated to Philadelphia from Ireland when he was nine, after both parents had died. As a butler, he had served Elizabeth Taylor and singer Peggy Lee, only leaving the latter's employ to enter rehab for alcoholism. His position with Duke is his first second chance since getting sober. She's not very sober herself, but Bernard knows his place, and that place is far away from the wine bottle. Fiennes' portrayal of the eternally shy and withering servant is on par with other great screen butlers, including Anthony Hopkins in The Remains of the Day. He consistently looks as if he knows he is not worthy of being in Doris' presence, even as the two begin developing a semblance of a friendship.

Bernard and Doris is intended to chronicle the chemically induced highs and the inevitable lows that Doris' considerable wealth will buy the pair. As Doris, Susan Sarandon has all of the confidence her cohort lacks. She's bold and exacting and more than a little amused by what the world has to offer. She's also lonely, continually searching for new ways to enrich her life. She finds a companion in Bernard, who is willing to go along with her crazy treks to Morocco and doesn't bat an eye when she brings home a yogi. The problem is, we never go on any of these journeys with them, so we never see any of the fun they might have. For as high as the pair gets, the film never matches that sense of inebriation. Director Balaban, who has directed multiple movies and episodes of television, as well as acting in countless more, never varies the energy in Bernard and Doris, deciding instead that the shortest distance between two points is a straight line.

It's sad to see a director blessed with two of the finest leads he could ask for and effectively cutting them off at the knees. Doris' destructive behavior eventually lures out Bernard's suppressed demons, and when she goes gallivanting around the world and leaves him behind, the loneliness drives the butler back to the bottle. Ralph Fiennes knows what he is supposed to do here and is capable of reaching the levels of sadness these moments require, but Balaban gives him nothing to lean against. Life with Doris around doesn't look like it's any more fun, and though Bernard's true motivations for his long service to Duke have never stopped being in question, one would have hoped a movie like this would have at least tried to get us close to the answer. Did he really care for Doris Duke, did he want to be her, or did he merely have nowhere else to go?

Outside of that one major story problem, there really isn't anything else wrong with Bernard and Doris. The location used for the Duke mansion has been beautifully photographed by Mauricio Rubinstein, and the set decorators and costumers have outdone themselves in recreating the extravagance that billions of dollars can buy. Apparently, though Bernard and Doris ended up premiering on HBO, it was originally shopped around as a theatrical feature, and it certainly has the production values. It just lacks the lust for life that Doris Duke so obviously had, and it's hard to show the downfall when everything is already down. 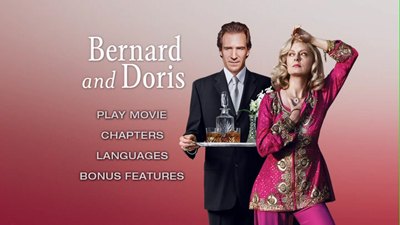 Video:
Bernard and Doris has been brought to DVD as a 16:9 anamorphic widescreen image. It's a fabulous looking disc, with no blemishes or authoring problems. Bright colors, sharp resolution, everything you could want in a disc.

Sound:
Two soundtrack options are available to home viewers: an English 5.1 mix and Spanish 2.0 dub. The English track is very good, with some nice speaker interaction giving the audio a healthy depth of field.

Spanish, French, and English subtitles, as well as English Closed Captioning, can also be activated for anyone who might require them.

Extras:
"Growing Up Rich: The Real Doris Duke" is a slim biographical profile of the actual woman. Clocking in under 10 minutes, it's really Bob Balaban sitting and talking about Duke while we see photographs of the heiress and her properties. This fills in a lot of the backstory we don't get in the movie, and Balaban explains a little about how the movie is far more speculation than actually based on facts. Seeing clips of Susan Sarandon next to Doris Duke serves to show us how well the actress captured her appearance and bearing. I would have liked a longer documentary about Duke, but this still serves the disc well.

Balaban also records a full-length commentary on the movie, and he is obviously a director who enjoys his details, because from the get-go he begins explaining a variety of the minute elements that go into a scene. I particularly liked hearing the various ways he made a low-budget production look big budget. His talk can lag at times, but he usually comes back strong.

FINAL THOUGHTS:
The premise of Bernard and Doris is definitely an interesting one, it just never gets its full due in Bob Balaban's biopic of the tobacco billionairess and her doting butler. Ralph Fiennes and Susan Sarandon are splendid in the title roles, but even they cannot transcend the deficiencies in the script. Following the pair across a decade together, sharing a true affection for one another as well as matching substance abuse problems and loneliness, Bernard and Doris should be a film about two people who reach very high only to come tumbling down. Unfortunately, it is sat on its kiester from the start and never manages to get up. Rent It for the performances and the swell art direction, just have some strong coffee at the ready. 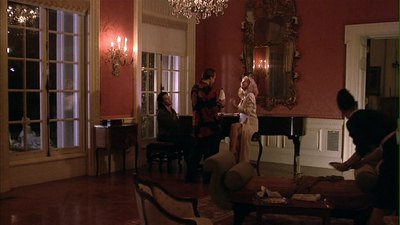