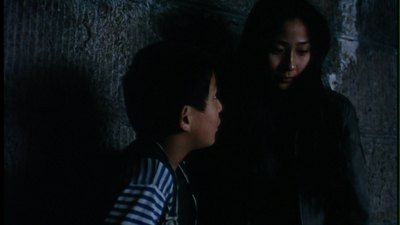 For those of you who thought Juno didn't treat the subject of teen pregnancy seriously enough, have I got the film for you!

Dam Street opens in Communist China in 1983. A young girl named Yun (Liu Yi) has gotten pregnant, and despite her best efforts to hide her growing belly, she is eventually found out. The father of the child is immediately shipped to another province, and his sister, a doctor, agrees to deliver the baby privately. Yun's mother, looking to divert some of the shame her daughter has brought on the family, conspires with the doctor to give the baby boy to an adopting couple and tell Yun he is stillborn.

Ten years later, Yun is still unable to live down her scandalous youth. She is working as a singer in a local performance troupe, and though she wants to sing traditional opera, the public demands only pop songs. She is lonely and in a destructive relationship with a married man, stuck in a town that is beginning to embrace the modern world and yet still unwilling to let her past die. One night while visiting her mother, a teacher at the elementary school, Yun meets one of her students, Xiao-yong (Huang Xingrao), a harmless troublemaker who becomes smitten with the singer. He begins following her around and doing things to try to impress her, and eventually he becomes her friend and protector.

Dam Street is the second feature film of writer/director Li Yu. The socially conscious filmmaker's previous film was the 2001 lesbian relationship picture Fish and Elephant, and she has since released the critically acclaimed Lost in Beijing. She is a serious-minded storyteller whose work shows a lot of sensitivity to characters stuck in a social environment intent on restraining their true feelings. Dam Street is a quiet drama full of pain and sadness and the occasional quiet joy. Its greatest strength is its brutally raw realism. Li Yu doesn't try to prettify anything. Everything in her movie is run down, from the buildings to the people. With an early career rooted in television documentaries, Li Yu is a director who likes to show life as it is.

This approach means that Dam Street gets problematic when Li Yu tries to inject more traditional dramatic turns into the script. It shouldn't be hard for anyone to guess who Xiao-yong really is to Yun, particularly after the way the mother's trick is explained in a rather detailed interstitial caption rather than shown on screen. (There is also a similar caption in the third act that serves as an unwelcome jump forward in the story.) If Li Yu wanted her audience to be kept guessing and be shocked when the truth became known, there were several cards she could have kept in the deck to keep us from seeing her hand.

Thankfully, Dam Street isn't about the clumsy machinations of typical melodrama, and so these fumbles are easily glossed over. There is a lot more going on here than who has kept secrets from whom. Liu Yi's deeply felt performance as Yun is brimming with sadness, and a genuine rapport develops between her and first-time actor Huang Xingrao that lends an honest emotional weight to the film. Both characters are missing something in their lives, and they both find it in each other. Though fate has its own designs for both of them, and despite the downbeat rhythms that push Dam Street along, Li Yu manages to bring some hope to the surface, leaving her audience with the feeling that this chance meeting will give both the woman and the boy what they need in order to finally grow up. 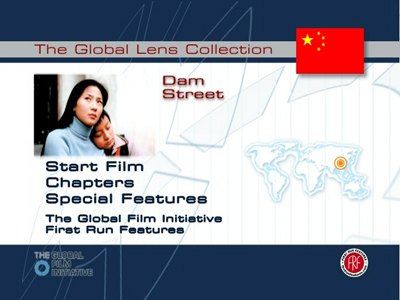 Video:
The widescreen anamorphic transfer of Dam Street does not have the highest standard of quality. The resolution is soft and the colors a little dark. There is also quite a bit of surface noise, usually small specks on the image, sometimes larger burns and a few times a line across the screen as the frame shakes, followed by a loud pop as the image steadies. I'd say it looks average for a DVD from about ten years ago, but doesn't really meet current standards.

Sound:
The original Mandarin audio soundtrack actually has a fairly decent mix, including some atmospheric effects in the back speakers. The English subtitles are burned into the print, however, and can't be removed, and sometimes they are a little hard to read.

Extras:
Almost all of the extras on the Dam Street DVD are text based, including a section explaining the mission statement and various aspects of the Global Lens Collection. The Collection was created to bring smaller films from around the world to a wider audience, and though most of the other movies in the program tend to be from places with smaller film industries than China, given the subject matter and independent scope of Dam Street, its inclusion makes sense. In addition to this, there is a one-screen write-up of First Run Features and a short gallery highlighting previous releases in the Global Lens series. There is also a short video trailer showing the 2007 selections.

A PDF file of a "Discussion Guide" can be accessed through your computer. This has biographical information and quotes about the movie from director Li Yu, cultural and historical information about China, and discussion questions for movie clubs or, I suppose, teachers wanting to show the movie.

Dam Street also comes with a booklet containing more information about Global Lens and a one-page write-up of each of the films in the 2007 collection.

FINAL THOUGHTS:
Dam Street is an emotionally raw, unrelentingly sad movie about a teenager (Liu Yi) who is forced to give up her baby and the long-lasting repercussions this tragedy has in her life. When she meets a young boy (Huang Xingrao) a decade later, they form a bond that helps them to ease their loneliness. As truths come to light, more tough decisions have to be made, and hopefully these will give them each a boost to move into the next stage of their lives. The second film by Chinese director Li Yu, Dam Street is a tough personal drama with a larger social setting, showing the difficulty of living under the strict moral code of Communist China in the 1980s and '90s. Though some of the story twists don't work as well as they should, the realism in the relationships is honestly felt. Recommended. 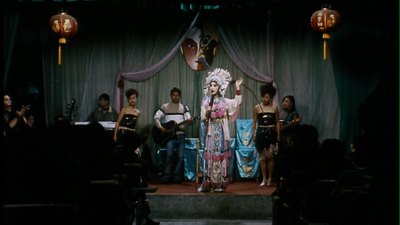