Pied Piper of Hutzovina, The 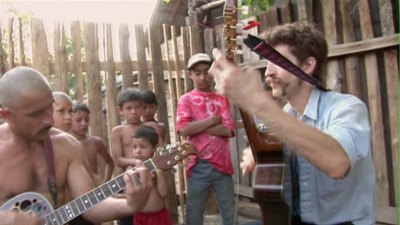 Though Eugene Hutz is probably best known as the lead singer of Gogol Bordello, a self-described "gypsy punk/hip-hop" band, film viewers will also know him as Alex, Elijah Wood's guide in Everything is Illuminated. That movie showed Wood's character traveling through the Ukraine in search of his roots, and in a case of art imitating life, or perhaps even vice versa, the 2006 documentary The Pied Piper of Hützovina is a real-life chronicle of Hutz's own pilgrimage back to the Ukraine to examine his gypsy heritage.

Tagging along on this tour, which goes from Kiev to Moscow, on to Siberia, and then back to Kiev, is filmmaker Pavla Fleischer, a Czech who makes her home in London. A chance meeting with the New York-based Hutz convinces her that they are kindred spirits, Eastern European artists making their way in the West. As she reveals at the outset of their journey together, she also has a romantic crush on the rock singer, a feeling he does not return. Though this doesn't play a major part in the narrative, it does inform how Fleischer puts the documentary together. As the film's narrator, she not only follows Eugene to see what he is looking for, but also to find out who the man is behind the persona and maybe to also get over her broken heart. Without these bruised feelings, she might not be as fearless in her portrayal, showing both Hutz's genuine passion for the gypsy background and its music as well as the side of the performer that is also a huckster.

The course of Eugene's holiday takes the film crew to a variety of locales, from small, impoverished villages to the grand gypsy theatre in Kiev. Not all of the people they encounter are welcoming, and Hutz takes a dressing down from the director of the gypsy opera. This is balanced by the love he gets from his musical hero, Sasha Kolpakov, in Siberia. Hutz is a bit of a revolutionary, marrying old styles of music to the new, and not everyone is going to back his vision.

Fleischer's camera loves Hutz, a naturally charismatic raconteur who is constantly "on." Wherever he goes, he is able to make music, to dance, and to have a good time. Yet, Fleischer begins to detect that the constant musical drive is not all there is. Only back in Kiev, when she is privy to a reunion with Eugene's aunt, uncle, and grandmother, does she start to see the boy that one day dreamed of being a rock star. Ultimately, The Pied Piper of Hützovina is her attempt to reconcile the many sides of the performer, to see how the man is his art and how without that art, he would not be the same man.

At a short 63 minutes, The Pied Piper of Hützovina makes quick work of its story. The moments without some kind of music are rare, which is fine, as it's the music that inspired the journey. Even so, I'd have liked Fleischer to pause and take in her surroundings a little more. One of the more memorable scenes is in the first gypsy village they visit, when the director tries to cross the language barrier and speak to a little girl named Zita who is trying to share with Fleischer what makes her sad. The director can't understand her, and so she chooses also not to subtitle what Zita says, leaving us wondering, as well, what has brought this beautiful child so low. The question still hangs in the air.

I suppose that's the nature of a crush, though. Fleischer is only interested in what Eugene Hutz is interested in only so far as it means getting closer to him. By the end of The Pied Piper of Hützovina, the filmmaker does start to crack the surface, capturing a side of the singer that hasn't been seen before despite his best efforts to hide it. 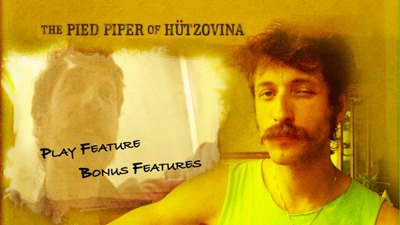 Video:
The widescreen picture transfer on The Pied Piper of Hützovina is really good, preserving the quality of the original footage without any digital combing or other issues. The image does not have spots, scratches, or dirt.

Sound:
One audio mix is available, with subtitles for the non-English segments coming on automatically. The audio was recorded live, and the mixing sharpens up the dialogue while letting the ambient sounds move to the proper position in the background. Sometimes Eugene Hutz is a little hard to understand, but that's from his accent, not a fault in the soundtrack.

Extras:
A twenty-minute "Making of..." uses deleted footage from the film to create a kind of video diary of Pavla Fleischer's travails during the travels, with more focus on her often contentious relationship with Hutz that includes a couple of rants, the likes of which did not make the final cut. There is also some footage of a side trip to a Buddhist temple.

Ten extra and extended musical performances from different points in the film gives us full songs from the various places the crew stopped, which should be a boon for anyone who got this DVD because of Hutz's day job. Unfortunately, these can only be played one at a time, and not all in a row.

A two-and-a-half minute "Promo Pilot" is the demo that Fleischer made from footage of her first meeting with Hutz as a test to generate interest in the project. The final theatrical trailer for Pied Piper is also included.

FINAL THOUGHTS:
The Pied Piper of Hützovina is a documentary about a musician that has a narrative appeal that extends beyond the viewer's familiarity with the music of Gogol Bordello. Eugene Hutz's trek across the Ukraine and Russia to replenish his gypsy spirit should fascinate anyone who has gone on similar personal journeys or who enjoys seeing other cultures. The music is good, and the focal figure charismatic. Recommended. 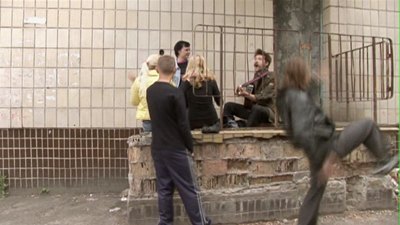