Originally released over 10 volumes in 2004-05, The Get Backers is a fun and light buddy show that has a good amount of action and fighting with just the right dash of humor.  For Otaku who haven't picked up the series yet, this complete series set, containing both seasons of the show, is the way to go.  With a very reasonable price point and nice packaging this is a set worth picking up.

The Get Backers are a pair of young guys, Ban and Ginji, who run a business retrieving stolen or lost objects.  Business isn't very good right now however.  They live in their car, and have run up a huge tab at a local restaurant.  Even giving their lowly standing, they are quite good at their job.  Once they take on a job, these goofy guys always recover the object they are sent after. 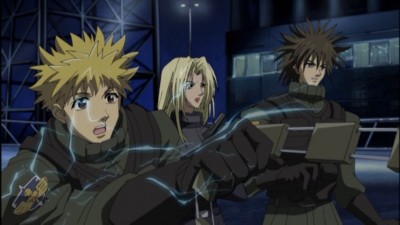 Part of the reason for this amazing success rate is that both members of the team have superpowers.  Ginji is a human electric eel, who can generate a powerful electric charge with his hands, and Ban has a 'jag-on' the ability to create a powerful illusion for up to a minute.  Indistinguishable from reality, Ban is a formidable opponent.  With these powers, and a stubborn streak that doesn't allow them to give up, the Get Backers are able to recover just about anything.

The series starts out with a few stand alone episodes where we get to meet the main characters and find out just what their powers are and how they function.  Soon the show progresses to short multi-part stories where the pair take on tougher cases and come up against some equally powered competitors.  Both friends and enemies are introduced, including such colorful characters as Dr. Jackal, Shido, Kazuki and Himiko.  These are all fun and entertaining stories, but nothing much more than that.

The program starts to rise above the average with the first big story arc that starts about half way through the first season.  Ban and Ginji are hired by a mysterious group of people to retrieve "IL," an unknown object that is being held in a lawless area known as the Limitless Fortress.  The Fortress is a group of abandoned skyscrapers in the middle of the city, a lawless place where the homeless and the lowest levels of society congragate.  This is the place that Ginji used to rule as the Lightning Emperor, back when he was a teen.  By returning, Ginji is putting his life at risk.  When he left he let down a lot of people, people who would just as soon see him dead now. 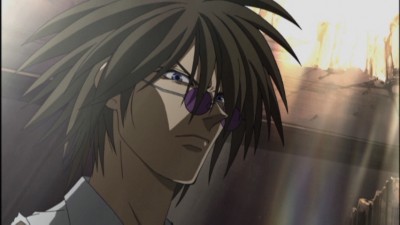 The world of the Limitless Fortress is an interesting place and a good setting to use.  A lawless town where might makes right, having Ban and Ginji, two people with compassion, enter it made for some good stories.  This arc was a good excuse to fill in some of Ginji's background too, as well as that of some of the other supporting characters.
The second season has another nice mix of stand alone and shorter multi-part stories, along with a couple of episodes just played for laughs.  There's also a nice longer story arc too.

This time the team has been asked to return to the Limitless Fortress and retrieve Makubex, the current leader of the lower level.  Makubex has been kidnaped by a mysterious group, and is being held on the upper levels, a place where no one ever goes.  It'll take all of the Get Backers talent and skill, along with a good dose of luck, to survive the trip to Babylon City, the top of the Fortress. 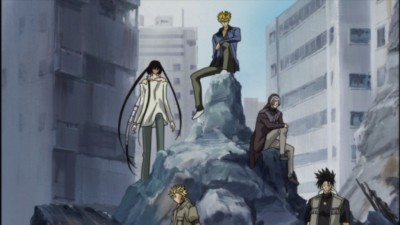 This series has a lot of action and humor as well as an interesting story.  I liked the way the characters were fleshed out and developed along the course of the program.  They started out as typical anime heroes; powerful but a bit boring, and ended up and complex people.

The Limitless Fortress was also a cool and exciting place to visit, and the two extended story arcs involving that lawless frontier in the middle of the city were my favorites.  I liked the way the series ended too.  There are enough plot lines left to make up another good season, but things ended quite satisfactorily.  All of the major storylines are wrapped up, and you get to see how all of the major characters have decided to live their lives.  A good ending to a good series.


This set includes all 49 episodes of the series on 10 DVDs.  These come in five slimline cases which are housed in a thick cardboard slipcase that is nicely illustrated.

This set offers the choice of the original Japanese in stereo, or a 5.1 English dub.  I viewed the show with both soundtracks and they were both fine.  The 5.1 English dub was more dynamic than the Japanese track, with a little more strength to the bass and a more enveloping feel, especially during the battle scenes.  The English voice actors did a good job, putting feeling into the characters without making them sound goofy like some dubs.   The rear speakers are used to good effect.

The 1.78:1 anamorphic widescreen image looked pretty good.  The colors were bright and the image was sharp.  There were some digital defects with aliasing in the background being the most noticeable.  Fine lines tend to shimmer when the camera pans over them, and there was some cross colorization in the few black and white scenes.  These weren't distracting and this is still a good looking DVD.

Unlike the individual releases, this collected set does not have any bonus features.

I had a lot of fun with this series.  Though the first Limitless Fortress storyline was a little long, this second journey into that place was paced much better and was pretty exciting. The show had good characters that grew and became fleshed out as the series progressed, and that's something that doesn't always happen in anime.   A solid show that comes Highly Recommended.