Zipporah Films // Unrated // Region 0
List Price: $29.95 [Buy now and save at Zipporah]
Review by Chris Neilson | posted May 12, 2008 | E-mail the Author
Since publication of Upton Sinclair's novel The Jungle in 1906, the conditions in slaughterhouses have been a source of concern and fascination to North Americans and Europeans. From Georges Franju's starkly beautiful and gruesome short documentary, Blood of the Beasts (Le Sang des Bêtes) in 1949, to Richard Linklater's recent fictionalized film adaptation of Eric Schlosser's exposé Fast Food Nation, animal slaughter has frequently been the focus of documentary and popular film. In fact, I've reviewed three other new DVD releases documenting the use of animals in industrialized food production since January: King Corn, I am an Animal: The Story of Ingrid Newkirk and PETA, and This American Life: Season One. Though less gruesome than Franju's Blood of the Beasts, and less conventionally entertaining than Linklater's Fast Food Nation, Frederick Wiseman's 1976 documentary, Meat, offers the most thorough examination of the industrial meat production process, from calving to packaging, ever captured on film.

Wiseman selected for his documentary one of the most state-of-the-art feedlot and slaughterhouse operations in the United States. The largest of three feedlots serving the Greeley, Colorado slaughterhouse has a capacity of 125,000 head of cattle. The slaughterhouse processes more than 8,000 cattle into meat on an average week. Banks of computers calibrate, monitor, and record everything from the mix of corn mash used to fatten up the cattle, to the present exact inventory of "beef round bottom rump round roasts." The killing floor itself is a shining example of automated efficiency engineered to minimize labor input and maximize meat output. So state-of-the-art is this facility that a bus load of Japanese businessmen with Nikon cameras in hand arrive to marvel at it. Though the facility likely would be considered small and antiquated by modern standards, it's not too difficult to imagine that this state-of-the-art facility from 1976 may still be in operation.

Wiseman's camera documents yearling calves transported from a ranch to the feedlot via an auction house. Arriving at an average weight of 700 pounds, they're quickly fattened up on corn to about 1100 pounds in a matter of months and then slaughtered. It is the assembly line process of rendering cattle and sheep into meat that occupies the largest portion of the documentary's 113-minute runtime.

The actual killing is much more efficient here than it was in Franju's Blood of the Beasts. A quick death from an electric shock has replaced a slow death from a knife slit to the throat. Once dead, the cattle are attached to a hook and transported along to various work stations by a continuously moving conveyor belt. At each station, a worker performs a single repetitive action which contributes to the transformation of the cow carcass to grocery store ready cuts. Many of these repetitive actions performed on the ever-moving carcasses are small cuts with a very sharp knife, but some are more dramatic including the use of partially-robotic steel jaws that snap the legs cleanly off, a crane that tears off the hide, and giant swinging chainsaws that split the sides of beef. Being continuously sliced and processed into ever smaller and more manageable pieces the carcass is finally rendered into so many packages of cuts. 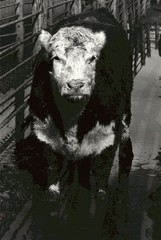 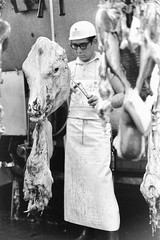 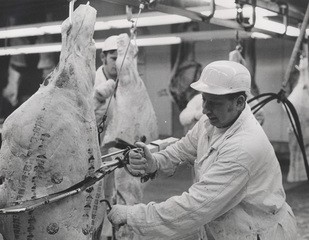 Unlike any other documentary I've ever seen on slaughterhouse operations, Meat also explores the rest of the business beyond the killing floor. The killing floor which is mostly a mix of white and Hispanic men looks quite different from the sales room and offices of upper management which are populated only with white males. On the other hand, white women dominate the clerical, dispatcher and public relations positions.

In the sales room, a couple dozen men sit at closely arranged desks taking phone orders and calling customers. In the cafeteria, the Colorado Governor makes a quick stop to press the flesh of the slaughterhouse workers. We also get a fly-on-the-wall peak at a union-management arbitration, a meeting of section chiefs, and an interview with the suave casually-dressed company president.

Wiseman uses no narration or musical accompaniment, and never stages his scenes. This style which he's used throughout his forty-one year career spanning 37 documentaries, leads some viewers to associate his work with the observational mode of documentary filmmaking originating with the direct cinema movement, but Wiseman has repeatedly disavowed this. Unlike direct cinema which strove to present unmediated reality, Wiseman uses the editing process to manipulate the footage to serve the storyline. Though his documentaries do not have traditional dramatic arcs, they do have a crafted structure. While the level of manipulation of material in Meat appears not to be as great as that of Welfare (1975), for example, it should be no more confused with unmediated reality than the documentaries of Godfrey Reggio ( Koyaanisqatsi: Life Out of Balance). Wiseman appears to have no agenda other than to document where our meat comes from, but this alone is a political act connecting consumers with a grizzly aspect of their food choices that many would prefer not to think too much about. 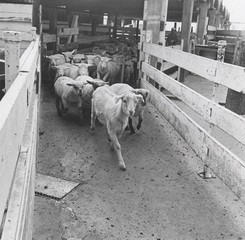 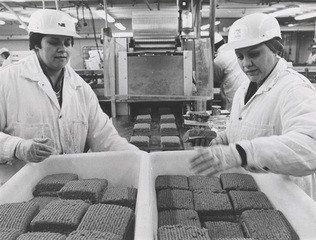 The DVD
Meat is available for purchase directly from Wiseman's film distribution company Zipporah Films. Meat is burned onto a DVR, but comes in a standard alpha case with commercial quality artwork.

The Video:
Like nearly all of Wiseman's documentaries, Meat was substantially funded by PBS for broadcast television. Accordingly, it was shot on 16mm film using a 1.33:1 aspect ratio which is preserved on this release. The black & white image shows some dirt, scratches and other damage, but these blemishes don't diminish the overall power of this documentary.

Final Thoughts:
A documentary like Meat probably couldn't be made today in the United States. After years of guerrilla footage secreted out of slaughterhouses by PETA and similar groups showing bad practices, the meatpacking industry has largely closed its doors to filmmakers not on its payroll. When Richard Linklater made Fast Food Nation, he was barred from American slaughterhouses and had to go to Mexico and get the footage quickly before anybody there figured out his agenda.

Westman provides a deeply compelling, but seemingly balanced, look at the physical process by which animals are industrially processed into food. Meat would make for an excellent double-feature with the more overtly political, but also excellent documentary feature King Corn which explores the origin of the cheap and abundant corn that makes feedlots like the one featured in Meat economically viable.