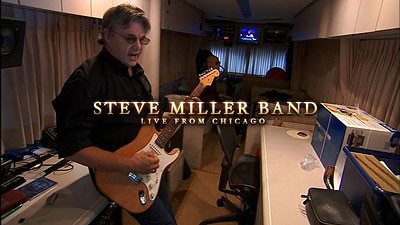 
The Show
Like most people who didn't experience The Steve Miller Band at their hit-making peak, I discovered the group via their incredible 1974-1978 Greatest Hits collection, perhaps the greatest compilation of its kind. It was my freshman year of college, and the smooth sound of Miller's guitar joined The Who as the two pillars of my post-adolescent pantheon of rock. In a display of kismet, shortly after I learned of Miller's music, his band came to campus for a concert.

I remember enjoying myself, but two things stand out to me to this day. One, the musicians weren't exactly spring chickens, and two, the crowd was rather elderly, and surrounded in a haze. It's a sad fact that as a band ages, their fans do too, but they still act the same way at concerts, which is cringe-inducing to watch. No one over 40 should be throwing devil horns. It's just silly.

But that's exactly the audience that gathered at the outdoor Ravinia Ampthitheater in Chicago for two concerts by Miller and company, which were filmed for this DVD. Admittedly, Miller's music has serious reach, with fans in most every demographic in attendance (including a healthy amount of pretty young things,) but it's hard to miss the soccer-mom-who-thinks-she still-rocks look of the crowd. It may be unusual to focus on the crowd like this, but the DVD, directed by Daniel L. Catullo III, spends just as much time zooming over the crowd and focusing on the rhythmically-challenged jerking around to the music, as it does on the band. 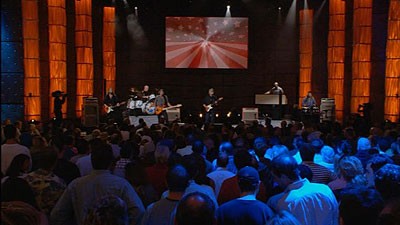 Fortunately, the camera occasionally finds the stage, event though they aren't the most visually arresting group ever. When they're not standing in place, playing competently, they break out the old stage cliches, like the line-up jam or the venerable guitar solo. Miller is a veteran showman, spreading the spotlight to his bandmates, telling stories and playing to an audience he knows well, which keeps the energy just below rocking out, making the concert into a very comfortable frat party with some fun sing-along tunes.

Sadly, Miller's voice isn't what it once was, and coming out of the gate, starting with a 15-minute version of "Fly Like an Eagle," he sounds tired. Things pick up as the show goes on, but the vocals still doesn't sound the way you remember it from the albums. The guitar work, on the other hand, is as brilliant as ever, not only from the masterful Miller, but his backing band as well, peaking in a sweet extended jam on "Winter Time." Indulgent instrumental riffs crop up time and again, especially from keyboardist Joseph Wooten, but it all works on the tracks, like a trippy "Wild Moutain Honey" or the southern-fried "Dance Dance Dance." What doesn't work is Wooten's out-of-place rap on "Fly," which while not technically bad, just doesn't fit.

The setlist sticks mainly to the group's biggest hits, with the exception of a short stretch early on where Miller pays homage to his Chicago blues roots with a run of covers, including Jimmie Vaughan's "Boom Bapa Boom," KC Douglas' "Mercury Blues," and the legendary "Crossroads," by Robert Johnson, with some of Miller's bluesiest work, like "The Stake," mixed in. Getting through that, it's all hits right to the end, before yet another unnecessary encore break, followed by a trio of big songs.

Despite some voice issues, the performance is a good one for the band's fans, but the presentation is a bit too manic for its own good. Even a chill song like "Winter Time" was shot like a John Woo film. It's hard to guess just how many cameras were used to capture the show, because every five seconds, there's another swooping crane shot, another zoom in from behind the band or a close-up of an instrument. Being in the audience must have been a trip, watching the cameras constantly flying over your head, while listening to a blues-guitar wizard at work. 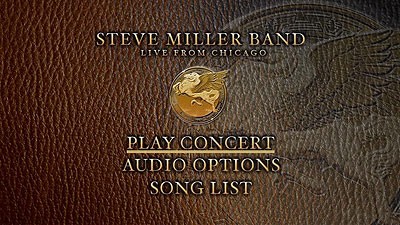 The DVDs
The concert, which runs about 1:47, gets one disc to itself, while the extras arrive on a second disc, with a third bonus disc in tow. The discs are packaged in a three-panel, two-tray still photo-covered digipak, with a pocket for a 12-page insert. The digipak is packed in an embossed slipcase, designed to look like leather. The DVDs features a static anamorphic widescreen menu, with options to play the concert, select songs and adjust the audio. Audio options include Dolby Digital 2.0 and 5.1 tracks, a 5.1 SRS Circle Surround track and a DTS 5.1 track. There are no subtitles and no closed captioning.

The Quality
The anamorphic widescreen transfer on this DVD is sharp, vivid and full of detail, though some angles look better than others. Thankfully, the best looking ones are the most important ones: the center stage camera and the close-up on Miller. The colors are bright and well-saturated, and there's not a hint of dirt, damage or any compression artifacts.

You get a few choices when it comes to the audio, but, as is normally the case, the DTS 5.1 track comes out on top, with excellent separation between the channels, a heavy bass beat, and a clarity that's just not there in the other options. The Dolby Digital 5.1 is actually more powerful , but that's mainly because there's less focus in the sides and rear speakers, giving more sound to the front to work with. The rare SRS Circle Surround track isn't bad, but I just didn't hear the individual instruments the way they sounded in the DTS track.

The Extras
The second disc starts with a nearly 20-minute documentary following Miller and San Francisco rock critic Joel Selvin, as they visit Miller's Chicago past, via an old-fashion cab. It's an excellent history of a truly underrated musician who was at the center of some of the biggest musical movements in the '60s and '70s. Mixed in with the stops is footage of Miller's fans at the Chicago shows, professing their adoration for him, pointing out how big he really is.

Up next is a photo gallery from the Chicago shows, played to "Winter Time," serving as a nice slideshow. If only there was another version with historical photos of Miller and his music...

The final extra on the disc is a slightly longer version of Selvin's ride with Miller, as presented on the critic's radio show (though here, it has video to accompany it.) The edit is different, so you get additional material that wasn't in the documentary, mostly about the music scenes Miller was a part of, but it does feel slightly repetitive, since he's once again riding in the car. That goes double when you read the booklet that comes with the DVDs, which was written by Selvin, and provides a history of Miller's career, covering the same material.

Also included in the set is a third disc, a CD of Miller's hits, performed live from the Chicago shows. It's similar to the '74-'78 Greatest Hits CD, though it swaps "True Fine Love" for "Shu Ba Da Du Ma Ma Ma Ma" and eliminates "Dance Dance Dance," for some odd reason. It's unlikely it would bump the Greatest Hits from anyone's stereo, but it would be nice as an addition to one's iPod, adding variety to the Steve Miller category.

On the Hunt
There's at least one easter egg on this DVD, and it's a rather easy one to find, since it's right out in the open. The content is well worth checking out. 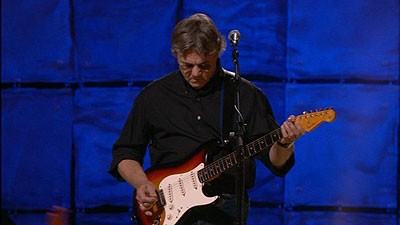 The Bottom Line
Considering how many hits the band had, the Steve Miller Band is hardly as well known as their contemporaries, but put on their music and people will have a hard time resisting it. There's a special feeling you get from their down-home, fun-time songs that is rare to find today, which explains why the group's fan base continues to grow years after they've released any new music. The DVD captures a solid performance by a band that has aged a bit, though their songs haven't, and with a great image and some bold audio tracks to enjoy, not to mention some nifty bonus features to enjoy, this collection should take a spot alongside the Greatest Hits CD on fans' shelves.