Could This Be Love/Je Crois Que Je L'aime (Canadian Release)

A pre-occupied CEO falls for a highly independent artist in a Paris-set, colorful but ultimately too predictable, light comedy by Gallic helmer Pierre Jolivet. Occasional bits of fresh humor ease pic's too-sweet-bordering-bitter narrative but it all ends with the mandatory love-conquers-all lesson many will undoubtedly find annoying.

Lucas (Vincent Lindon) is struck by Elsa's (Sandrine Bonnaire) beauty when he sees her working on a giant ceramic floor in the foyer of his building. He approaches her and asks if she would be willing to have lunch with him. After a stereotypical exchange of misleading lines she agrees. Something more than a friendship is in the making.

Lucas likes Elsa and Elsa likes Lucas. Both of them however have second thoughts about why the other is interested. Elsa believes that Lucas is a man who can have any woman he desires - he is rich, handsome, and successful. Lucas is suspicious because the last time he approached a beautiful and independent woman she turned out to be a spy for a rivaling company. And so the fun begins.

Watching yet another film about the two sexes and their typical insecurities however wasn't much fun. At least not for this reviewer. Filled with plenty of one-liners and awkward situations which in real life would be anything but "romantic" Could This Be Love? (2007) gets a pass only because of the two thesps and their ability to improvise. An aging Sandrine Bonnaire delivers a few impressive jabs at Vincent Lindon's macho-wannabe character who eventually succumbs to, you guessed it, the power of amore.

But things get even more tedious with the introduction of a secondary character (François Berléand) who becomes Elsa's shadow. He must confirm that she isn't paid to spy on Lucas and therefore her feelings are real. As expected a string of annoying scenes further damages the little that actually works here eventually proving that romantic comedies are next to impossible to keep away from ridiculous scripts. 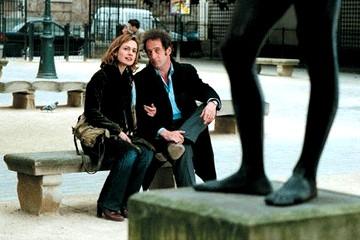 Pierre Jolivet has been undeniably more successful as a writer (Luc Besson's Le Dernier Combat/ Subway) than as a director (the exception being En Plein Coeur) and I am somewhat surprised to see him fully devoted to shooting a comedy. Could This Be Love? isn't a disappointment of paramount proportions but to claim that it is original, fresh, or actually "romantic" would be simply unfair. If anything, it comes dangerously close to what Hollywood mass-produces each year, and I don't think that this could be considered a compliment.

Presented in an aspect ratio of 1.85:1 and enhanced for widescreen TVs this Canadian produced disc is far from what I expected it to be. First of all this is an extremely poor PAL-NTSC port with a horrendous amount of "ghosting" forcing the picture into some very unusual jitters. Selected scenes are so practically unwatchable and I am having a difficult time believing that the DVD underwent any quality control at all. This being said, more than likely the Canadian distribs appear to have borrowed the French release as on the whole the actual print is quite strong. There aren't debris, scratches, dust spots, ect. Contrast is also decent but as far as detail goes this presentation fails impressively. To sum it all up this DVD reveals one of the most severe examples of improper standard conversion. In fact I would recommend it to anyone who might be unsure what "ghosting" and "combing" are and why reviewers spend so much time on them.

The disc arrives with a plausible French 5.1 track without any serious defects. The dialog is clear and easy to understand and I did not detect any pop-ups, hissing, etc. The surround speakers aren't tested but they do appear active most of the time. The English subtitles are well done lacking grammatical errors.

There aren't any supplemental materials to be found on this disc.

A typical romantic comedy with strong Gallic flavor Could This Be Love? will bore those hoping to uncover a hidden gem. A lazy Sunday afternoon is all this film is good for. The DVD presentation on the other hand might force many to actually go out and enjoy the surprisingly decent weather we've had lately. Rent It.