Death of a Cyclist

Criterion adds a strong title to its limited selection of Spanish-language films - Juan Antonio Bardem's Death of a Cyclist (1955). Employing typical for the noir genre elements pic delivers a well-punctuated critique at Spanish bourgeois, the value system it shares. Winner of the FIPRESCI Award at the Cannes Film Festival.

An upper class geometry professor (Alberto Closas) and his mistress (Lucia Bose) kill an innocent cyclist while driving back from a late-night rendezvous. They decide to run away and leave their victim on the road. Back home the couple slowly begins to realize the consequences of their decision - the professor's job is now on the line because of his inability to deal with pressure while the woman faces the scrutinizing looks of her wealthy husband.

Strongly influenced by Hollywood and openly supportive of the Spanish Communist Party Bardem is a director whose works prior to Death of a Cyclist had only partially revealed his impressive ability to coalesce a variety of different genres into ripe with political allegory cinema. Firmly grounded in his beliefs Bardem did not shy away from dismissing Spanish society's perceived apathy towards Franco. Eventually, his strong support for the Communist movement culminated in the commissioned Предупреждението a.k.a The Warning (1982).

In Death of a Cyclist the moral deterioration a mid-age professor is shown succumbing to is directly related to Bardem's conviction that Spanish intelligentsia had failed to confront Franco and its corrosive regime. Similar is the depiction of Bose's character, when asked to claim responsibility for her actions she quickly makes the type of decision Bardem was convinced the wealthy elite would be comfortable with if faced with an identical situation - evading responsibility.

A rather short segment in Death of a Cyclist indirectly suggests that change is only possible with the participation of the masses. Here the message is made clear by the introduction of a grading conflict in the university where the professor teaches which spurs a violent student protest forcing him to resign.

Despite of its strong political overtones Death of a Cyclist remains an incredibly mature looking film. In fact, it is rather surprising to see how well its main protagonists maneuver through a sea of complex scenes one would rightfully expect to be riddled with clichéd lines and predictable lessons in morality. On the contrary here Bardem's political insinuations remain well balanced with the film's distinctive noir tone.

The black and white cinematography by Alfredo Fraile is particularly impressive suggesting a strong influence by the Italian neoralists. Death of a Cyclist is also Georges de Beauregard's debut as a producer who would eventually become a preferred accomplice for Melville (Le Doulos), Godard (Le Mepris), Chabrol (La Ligne de Demarcation) and Rohmer (La Collectionneuse). 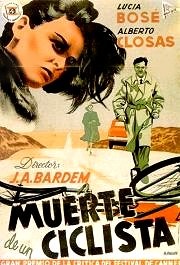 Presented in its original aspect ratio of 1.33:1 the print provided by Criterion reveals passable contrast, good black and white gradation, and a generally free of edge-enhancement presentation. It is also progressive. This being said however once again what Criterion offer is a picture-boxed treatment which won't please those of you with 16/9 TVs. In addition to that the actual quality of the print provided by the distribs is noticeably below what we have come to expect from them. There is a notable amount of damage here which won't disturb your viewing experience but you shall certainly become aware of it as well as a few shaky frame overlaps. To sum it all up this disc certainly looks like one of the less impressive offerings to come out under the Criterion umbrella.

Presented with a Spanish mono track and optional English subtitles the audio treatment is very much on par with the video presentation. It is acceptable but far from impressive. The dialog is easy to follow but there are occasional fluctuations in the quality of the sound coming off of the speakers. It appears to me that whatever the limitations on this print they clearly must have been inherited from the master used to produce Death of a Cyclist.

Aside from a long and very informative documentary titled Calle Bardem (44 min) where a myriad of Bardem colleagues and scholars offer their thoughts on the Spanish director's work as well as political affiliation(s) the only other supplemental material here is a lovely 30-page booklet with a fascinating essay by Marsha Kinder, a professor of critical studies in the School of Cinematic Arts at the University of Southern California. In addition to it there is also a passionate political statement by the Spanish director himself titled "Report on the Current State of our Cinema".

A fascinating film with strong political overtones Death of a Cyclist is an excellent introduction to a period of Spanish cinema largely unexplored by North American film distributors. The DVD by Criterion isn't as impressive as some of their previous efforts but it is nevertheless a worthy addition to their collection.