Kino has released a silent film in their First Ladies film series that was previously only available on VHS tape:  The Red Kimona.  This is a film was produced by Wallace Reid's widow, written by Dorothy Arzner from a story by Adela Rogers St. John, and while Walter Lang gets the directorial credit in the film, Mrs. Reid was very involved and approved all of the shots.  A socially conscious film, (the type that wouldn't be produced any longer once the Hays Code came into being,) this melodrama is entertaining, if slightly predictable.  It's also one of those films where the story behind the story is just as interesting as the movie itself, if not more so.

Dorothy Davenport was an ingénue of 17 at Universal Studios when she was cast opposite an up and coming actor, Wallace Reid.  The two hit it off and were married in 1913.  Dorothy continued to act until 1917 when she gave birth to her first child, Wallace Reid Jr. 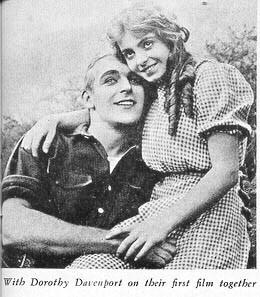 Reid's star grew.  He appeared in D.W. Griffith's A Birth of a Nation (1915) and then signed with Famous Players and was soon their biggest star, headlining a series of daredevil race films that were popular with the public.

In 1919 tragedy struck.  While filming a train wreck for The Valley of the Giants, Reid injured his back.  Not wanting to lose their star for any longer than was necessary, the studio sent a doctor to Wallace who prescribed morphine to kill the pain and get him back in front of the camera.  Already a heavy drinker, Reid's back healed but the need for morphine didn't leave.  He was addicted and the studio made sure he had a good supply so that he could keep working.  In a few years his health started to fade and in January of 1923, at the age of 31, the once fit and strapping Wallace Reid died of influenza which had ravaged his weakened system.

Dorothy poured her anger and frustration at her husband's senseless death into making movies.  That same year that he died, she made Human Wreckage with Bessie Love.  Now a lost film, this movie tells the tale of a wife (Davenport) who tries to save her lawyer husband from a drug addiction.  The film was a popular and critical success, and made Davenport, who was now billed as Mrs. Wallace Reid, enough money to start her own production company.  Next she made another film spotlighting one of society's ills, Broken Laws (also lost.)  This one dealt with Juvenile Delinquency.  In 1925 she made her third and final film with a conscience, The Red Kimona which centered on prostitution.  For her story she took a real-life crime, a sensational case in the LA area when it occurred (1917,) and dramatized it.  Written by Dorothy Arzner from a story by Adela Rogers St. John, the film was The Red Kimona.

The film opens with a lady (Mrs. Reid herself in an uncredited role) leafing through a compendium of newspapers.  She stops at one headline that reads "Story of Gabrielle Darley Startling Human Document" and informs the audience that the story she is about to tell is true, and that "if it contains bitter truths, remember that I only turn the pages of the past. 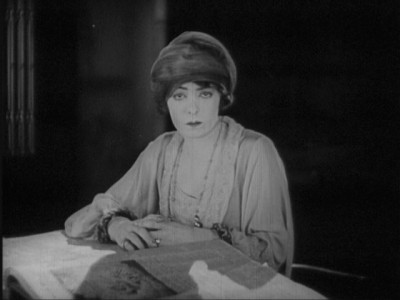 The narrative then turns to Gabrielle Darley (Priscilla Bonner1), a prostitute in New Orleans.  In a flashback we discover that Gabrielle grew up in a house with a cruel father (played by Tyron Power Sr, father of the famous swashbuckler) and an indifferent mother.  When a smooth talking city fella, Howard Blaine (Carl Miller) starts to admire the attractive school girl she immediately falls in love with him.  He promises to marry her when they get to his home in New Orleans, and the two run off together.

One in the Big Easy however, Howard takes Gabrielle to the red light district and sets her up in her own apartment.  An apartment where she entertains men for money.  She does this because she loves Howard so much and wants to make him happy.

When she discovers that Howard has taken all of her money and run off to LA in order to marry someone else, she follows him.  When she discovers the man she loves in a jewelry store buying a diamond ring for another woman she can't stand it and shoots him dead.  She is arrested and tried for murder.  Telling her story and painting Blaine as a monster, Gabrielle is acquitted.  Now something of a celebrity, the socialite Mrs. Beverly Fontaine (Virginia Pearson) offers to take her in, but only so she can be the centerpiece of her tea parties and social gatherings.  After Fontaine tires of the young girl, she kicks her out onto the street.  There, poor Gabrielle can't seem to hold a job.  She works hard and is willing to learn, but whenever someone discovers her past, she's fired.  It seems like there's only one route left open to her, to return to her earlier lifestyle.  But will she? 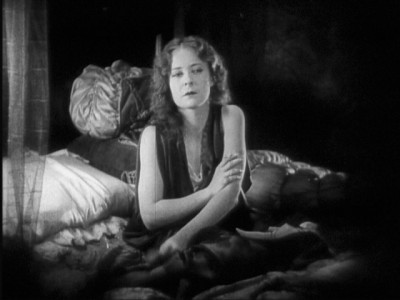 This was a fine film, with some nice direction but ultimately there wasn't a lot to separate it from the other melodramas of the period, aside from the subject matter.  They treat the prostitution tastefully, never actually mentioning sex or showing Bonner with a man, but it's obvious what's going on.  The ending is predictable (I left out the sub-plot about Fontaine's chauffer who falls in love with Gabrielle in my synopsis) and very "Hollywood" but still satisfying.

Bonner does a great job playing the hooker with a heart of gold who just wants to be given a fair shake.  She's isn't as over-the-top as I was expecting, and manages to breath life into her character.  The scene where the bell in her apartment rings, signaling that a customer is coming up, was very good.  She bolts the door and stands against it defiantly, but slowly realizes that she has no choice.  She physically withers as she unbolts the door and powders her face for her visitor.

The film opened in 1925, and soon after Dorothy Reid (as she was now known) found herself being sued for $50,000 for invasion of privacy.  The real Gabrielle Darley (now Gabrielle Darley Melvin) saw the film and was aghast.  It wasn't the fictitious parts of the movie that bothered her, but the true events.  In her court filing Darley-Melvin stated that after her trial she married, settled down, and was a respected member of society.  None of her friends and neighbors knew of her past since she took her husband's name, but when the movie come out she found herself ostracized once again. 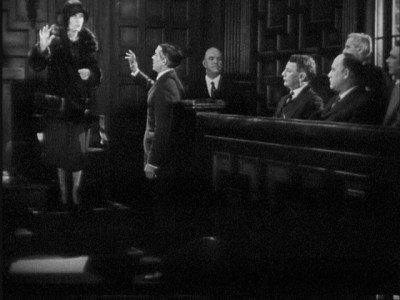 It's ironic that a movie that pleads with its viewers to "help - rather than hinder - the upwards struggles of such unfortunates" would end up ruining the life of the exact person they were trying to help.  Presumably Reid used Darley's real name in order to create a little publicity and entice people who remembered the trial into the theaters.   The odd thing is that every other real person in the film was either unnamed or had their name changed.  Darley's attorney for her murder trial in real life was one of the best trial lawyers around, Earl Rogers, father of the writer Adela Rogers St. John.  He wasn't named in the film.  There was a socialite that appeared with Darley in court and took her in afterwards, the famous soprano Ellen Beach Yaw.  Even her victim's name was changed; in reality he was named Leonard Topp.   It would be unfortunate that Reid didn't change the main character's name too.

Today it would be a hard case for the plaintiff to win.  Events in the public record are fair game; look at the recent movie about the 2000 Presidential Election recount in Florida.  Things were a bit different in 1925 however.  Both the lower court ruled in Darley-Melvin's favor.  It was almost like they were looking for a reason to grant her a win when they proclaimed that the California Constitution guarantees the pursuit of happiness, and that Reid made that impossible for Darley-Melvin with her film.  The upper court agreed, and the Supreme Court for the State of California refused to hear the case, granting Gabrielle her victory.  Reid was forced into bankruptcy.

The odd thing about Gabrielle's court victory is that her case against Reid was pretty much fabricated out of whole cloth. Unlike the film's ending, Gabrielle had reverted to her old ways.  She was a prostitute and Madam and apparently spent most of the rest of her life as one or the other.  Not only that, but she left a trail of dead lovers behind her.  By one account six of her lovers were either shot, poisoned or died under mysterious circumstances.  Ya know, I bet there's a movie in that story somewhere.

The scene-specific piano score was written and performed by Robert Israel and he does a very good job.  There were a couple of sections where I thought the music could have been a little dourer to mirror the heroine's troubles, but this is a minor point.  In general the score fits the mood quite well and makes the film more fun to watch.

It looks like Kino has used the same master that they employed for the videotape release some years ago.  (The VHS tape release was aimed at libraries and rental stores and retailed for $50, 2 ½ times the MSRP of this DVD!)  The film was restored by Bret Wood and is from the American Film Institute at the Library of Congress.  It looks very good though it doesn't fall into the top-tier of restored silent movies.  The contrast is very good and the level of detail is also fine.  Some highlights are washed out, but this isn't a major defect, and there are some spots and dirt on the print, which isn't surprising given the age of the film.  The movie does include the hand-painted sequences that match the original release. 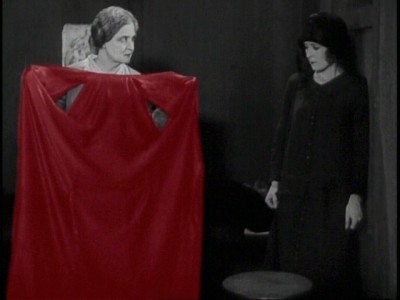 There are no extras.

This is a fine example of a socially conscious film, something that was largely missing from Hollywood's output during the days of the Hays Code.  (And some would say now too....)  The story is a bit melodramatic, but it's still very enjoyable and worth a spin.  And while the print has a little damage, the image is overall very good.  Fans of silent films should certainly check it out.  Recommended.

1)  Though she's not famous today, Priscilla Bonner had a number of important roles in the silent era.  She stared in two of Harry Langdon's best films, Long Pants and The Strong Man and was Clara Bow's best friend Molly in It.  This film shows that she's just as adept at dramatic roles as she was at comedies.  She left acting when she married her second husband in 1928.