Before the Nickelodeon: The Early Cinema of Edwin S. Porter

Kino has released a nice companion to their earlier boxed set:  Edison:  The Invention of the Movies.  Before the Nickelodeon:  The Early Cinema of Edwin S. Porter is an hour long documentary that focuses on the career of the first great American director.  While the film is a bit dry and offers little in the way of revealing Porter the person, it is a very nice chronology of early film including discussing both changes in technique and methods of exhibition.

Edwin S. Porter started his career in film after leaving the Navy in 1896.  He was a traveling projectionist, taking a set of films on the road with a projector and showing them to communities that didn't have a theater.  In this capacity he traveled through Central and South America.  When he returned to New York, he landed a job as a projectionist in a theater where he would arrange several different short films together to tell a story; projecting a few films about the Spanish-American War sequentially for example. 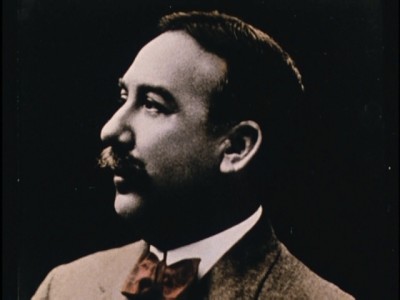 In 1899 Porter started work for Edison, and soon was in charge of the inventor's motion picture production department.  There he filmed, directed, and edited films.  At first audiences were mainly interested in news stories, reenactments of events making headlines, and Porter gave that to them.  Soon however those films fell out of favor and Porter changed with the times, creating narrative stories.  Influenced by Méliès and other European directors, Porter soon started experimenting with cross-cutting action scenes - showing events that are taking place in two locations simultaneously. He added dissolves and fades to his films, making the transactions less jarring.

His most famous film is "The Great Train Robbery" (1903), a classic early film that includes superimpositions and other camera tricks along with tight cutting to create a rip-roaring western flick.  It was a huge hit, touring the country for years and making piles of cash for Edison. 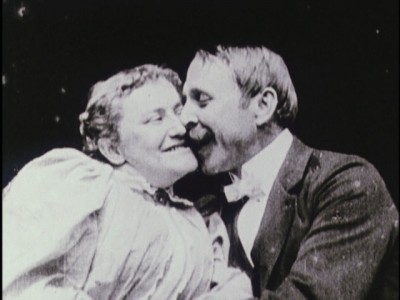 After that Porter continued to experiment a bit, but soon stagnated.  Refusing to adapt to the industry that he helped to create, by 1909 he had left Edison to join and independent producer and by 1915 he had stopped making films all together.

This documentary gives a nice general overview of Porter and the state of the movie industry while he was working in it.  It not only chronicles the development of a film language, but also traces the evolution of film presentation, from traveling shows, to Nickelodeons, to full fledged theaters.

While this is a nice overview, it comes across as being somewhat superficial.  The film never delves into Porter's personality and viewers never get a sense of what he was like as a man.  They also point out some paradoxes concerning Porter, such as the fact that he was very innovative in the beginning of the film industry but then became stuck in his ways only a few years later, but never try to explain them.  Why didn't Porter use techniques in story telling that others developed?  Why didn't he go into management at Edison?  How did he feel in the later years of his life about the film industry?  None of these questions are examined. 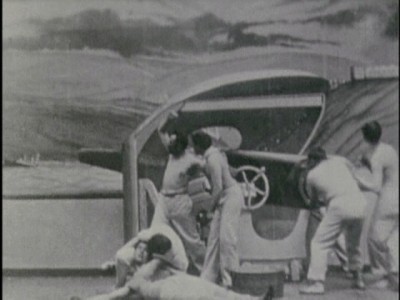 In addition to the lack of personal information about Porter, the documentary takes some odd choices in selecting what to discuss.  It spends a good amount of time on "Life of an American Fireman" (1903) which was one of the first films to use cross cutting, but the documentary admits that they are not sure if Porter was the one to edit the film in that fashion or if it was done a decade or two later to make it seem more up to date.  While clips of "The Great Train Robbery" (1903) are shown and the film is mentioned as being important, it's mainly glossed over.  You could make an hour long documentary on just that 12 minute film, and to practically omit it from a biopic about its director is almost criminal.

This film, made in 1982, is narrated by Blanche Sweet and sounds fine.  The two channel soundtrack sounds about average for a 25 year old documentary.  There isn't a lot of bass but the narration is easy to understand.

The full frame video consists mainly of vintage photos and clips of Porter's films.  Some of the clips are old and faded, and other have a fair amount of dirt, but overall the image quality is fine.

This disc also includes three early Porter films:  Uncle Josh at the Moving Picture Show (1902 - 3 min.), Life of a Cowboy (1906 -17 minutes), and Waiting at the Church (1906 - 9 minutes.)  These are nice examples of Porter's work, but better selections would have been some of the films discussed in the documentary such as Jack and the Beanstalk or Rescued from an Eagle's Nest. 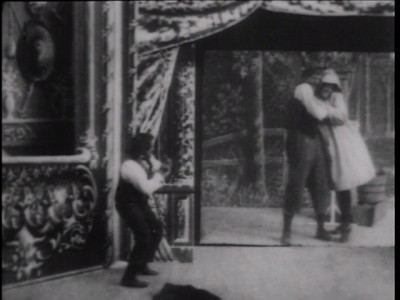 After watching this documentary I didn't feel that I knew much more about Edwin S. Porter than I did before screening it.  The film hits the highlights of his movie career, but glosses over his personal life and lacks significant analysis of his body of work and some of the decisions that he made.  Told in a rather dry manner, this would for someone just starting to explore early cinema who wants the facts presented in a straight forward and concise manner.  In that case this would make a good rental.