Kino presents a film by Lois Weber, one of the first female American directors, as part of their First Ladies:  Early Women Filmmakers series.  The film at hand, Hypocrites, was written, produced, and directed by Weber, and covers a theme she obviously felt strongly about.  The film looks at hypocrisy in society, at all levels; from politics to business and even social and home life.  While the directing is excellent and many of the scenes beautiful, the movie itself is rather heavy-handed and therefore unexciting.

Lois Weber started out as an actress in Hollywood, but went on to become a director, writing many of her movies herself.  What's so interesting about her story is that she did all this in the early days of the last century.   Weber directed her first film in 1913; years before she even had the right to vote.  In 1914 she became the first woman to direct a feature production.  Weber rose up to become one of the most respected directors in Hollywood, and the highest paid at one point too.  She was a feminist too, and her movies, almost always dramas, often focused on social themes.  But as styles changed in the 1920's, Weber fell out of fashion.  The rise of the studio system pushed many women out of the field too, and by the late twenties her career was all but over. 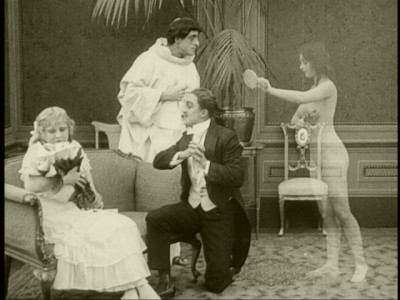 Hypocrites was made in 1915 at the height of her career.  The story starts in a church, where a minister, Gabriel (Courtenay Foote), gives a sermon on hypocrisy.  Some of the people are moved by it, but most aren't.  One member of the congregation, a business man, is so offended he instructs others to demand Gabriel's resignation, but not before complimenting the preacher on his speech.

Distraught that he wasn't able to make his flock see the beauty in being truthful, Gabriel dies immediately after the service.  His spirit, cloaked in white robes, leaves his body and turning the film into pure allegory, beckons his congregation to follow him up a mountain to find Truth, portrayed as a double exposed naked woman (uncredited).  Many start up the hill, but the going is too difficult and Gabriel is the only one who makes it. 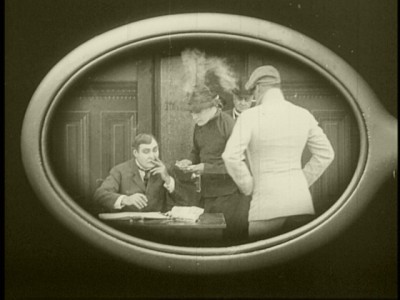 If he isn't able to bring the people to Truth, he'll bring Truth to the people.  He then becomes a monk in a medieval society.  While the other so-called holy men eat and get fat, Gabriel works and works on an unseen statue.  On the day of the village fete everyone gathers around for the unveiling.  It's a beautiful sculpture of the naked Truth, which offends everyone who is present.  In their anger the crowd kills Gabriel.

Having failed twice, Truth takes Gabriel on a tour of society, holding her mirror up to different scenes to reveal the truth of their character.  Politicians take graft, business men are dirty, society people are fake and even a seemingly nice set of parents overindulges their children with sweets and themselves with sex.

The direction on this movie was excellent.  Weber certain knew how to block a shot in order to create a beautiful image that had a lot of visual impact.  She experiments successfully with pans and dolly shots too.  At the beginning and end of the fete there are a pair of very long and impressive shots of the crowd.  The camera moves across the people excited (or later angry) to see what Gabriel has sculpted.  These shots would make a modern day director nervous since they are so long and involve so many extras having to act, but Weber pulls it off and these scenes are the most memorable in the movie. 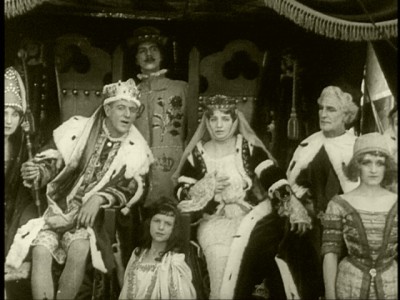 The problem with the film is that Weber is about as subtle as a flying mallet.  She eschews entertainment or even much of a narrative structure in order to pound her message home:  if no one in the film is honest and embraces truth, maybe the audience doesn't either.  Some scenes don't work either.  The mountain climbing sequence is problematic and a bit confusing, especially at first when viewers don't understand why Gabriel wants everyone to follow him.  Most of it is clear, like the man who can't get up the mountain because he's carrying a heavy bag of gold that he won't leave behind.  Other parts don't make much sense though.  One character is a man who is carrying a young child.  He can't even start up the steep slope without falling.  He calls to his wife who turns around and goes back down.  What was he supposed to do, leave his infant child?  How is caring for your offspring hypocritical?  There's also a woman who nearly makes it to the top but gets too tired and can't quite complete the journey.  She calls to Gabriel to help her, but he doesn't.  You'd think if he really wanted to lead people to truth he'd lend a hand.

Almost an experimental film in style, even at a scant 50 minutes the movie seems too long.  After the first section it's easy to see where Weber is going with the film and THE MESSAGE becomes overwhelming.  The problem is that she doesn't offer any compelling arguments why hypocrisy is so horrible.  Yes, the politician taking graft is bad, but her audience can't relate to that.  She's obviously trying to get people to examine their own lives, but never provides a reason that they should.

The original score was written and performed by Jon Mirsalis.  Mr. Mirsalis performs to his usual standard, which is to say he does a great job.  The scene-specific score is nice to listen to and mimics the emotions presented on the screen.

The full frame image has some nitrate decomposition, all of it near the beginning of the film, but aside from that it looks great.  The image has very nice definition and the picture is very clear.  The contrast is excellent and aside from the nitrate damage the film looks like it was from the 50's not the 10's.  Fans of the director's work will be very pleased with the quality of this print.

The disc also comes with a short, Eleanor's Catch from 1916.  This film is directed, produced, and stars Cleo Madison.  This is one of the best films in Kino's three disc First Ladies series.  Cleo is a young girl who falls under the charm of a smooth-talking city-slicker.  The surprise ending works particularly well and makes this a fun film.

I've always found Lois Weber to be heavy-handed in her stories and this is no exception.  The bizarre structure of the film may have worked with a story that wasn't so preoccupied with driving home a message, but as it is this film's lack of subtly dooms it.  Filled with some very nicely composed shots, it's too bad that the movie isn't more entertaining.  As it is only die-hard silent cinema fans will want to screen this.  The same can't be said of Eleanor's Catch, a fun and delightful short that is the highlight of this three disc series.  Overall this disc would make a good rental.