Magic of Melies, The

Flicker Alley recently released an impressive five-disc collection that gathered all of the existing works of the pioneer filmmaker George Méliès. (Read my review of the set here.) The mammoth set is a great addition to the collections of film scholars and die-hard fans of early film. Honestly though, how many people are really interested in seeing 173 Méliès films? Most people would be happy with a nice selection of this important director's work, and that's where Kino comes in. They've recently released, in association with Film Preservation Associates, The Magic of Méliès. Previously available in the The Movies Begin: A Treasury of Early Cinema 1894-1913 boxed set, this collection of 15 entertaining and fun films created by the French director over 100 years ago. 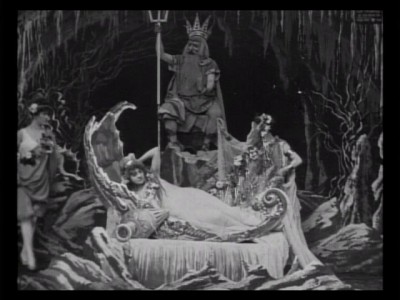 George Méliès was the son of a factory owner, and rather than join his brothers in the family business and live a comfortable, but boring life, he was drawn to the stage. He studied magic and eventually talked his father into buying the Robert-Houdin Theater in Paris for him where he performed. In between acts, Méliès would project magic lantern slides onto a screen, and when the Lumiere Brothers presented their first movies, Méliès knew that they were going to be popular. He was unable to buy a camera from the Lumiere's, they said that in all good conscience they couldn't take his money since movies were just a fad (though that was just an excuse....they didn't want the competition.) He ended up going to England to purchase a camera and projector and started making actualities, slice of life films that everyone was making at the time and showing them in his theater.

It didn't take him long to start innovating however. Méliès soon discovered that by stopping the camera and movie around set pieces and people, he could cause object to appear, disappear, or appear to move on their own. He experimented with double exposures and split screens and basically invented the art of special effects. 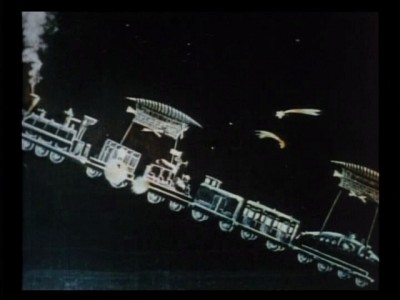 This collection includes over a dozen of Méliès creative and imaginative shorts. Watching these, it is easy to understand why his films were so popular. Even today the movies are entertaining and ingenious; Playing cards come to life, the sun and moon have human faces, and a prankster attaches two policemen to each other with a stick of glue. Méliès really let his imagination soar with his films and created some of the most innovative and commercially viable movies ever made.

The highlight of the set is The Impossible Voyage (1904), a film that tries to cash in on the success of Méliès most famous film, A Trip to the Moon (1902, which despite the image on the cover, is not included on this disc. That's not an egregious error however as the film is available on several other DVDs.) In this a fantasy adventure film that has a group of explorers traveling around the world and eventually taking a train to the stars. The version included on this disc is hand-colored and features a narration that was written by Méliès especially for the film.

These films come with a synthesizer score that is nice, but I'm really not a fan of electronic music for silent films. There's just something about it that seems 'off'. The audio wasn't distracting or horrible, just not my cup of tea. The sound quality was good however with no distortion or background noise.

These films are presented window boxed with a 1.15:1 aspect ratio. Though I haven't researched it, I expect that this is the OAR. The films are very old, but they look very good in on this disc. The contrast varies but is generally excellent and the level of detail is also strong. The image is a bit soft, but that's not unexpected.

This disc comes with a 20 minute documentary on Méliès from 1978: George Méliès: Cinema Magician. It's a nice overview of his career if a little dry. The narrator is pretending to be Méliès, complete with a phony French accent, and speaks in the first person, which isn't my favorite way to narrate a documentary. If all of his spoken parts had come from actual letters he wrote or interviews he gave, that would be one thing, but this didn't sound like that was the case.

There are also a series of film notes, which just reproduce the description of each film from Méliès' own catalogs.

Running at an hour and twenty minutes (plus extras) this disc has just the right amount of material. There's a nice selection of enjoyable and inspired shorts, but it's not so much that it gets overwhelming. If you're looking for a taste of this innovative director's work, this is the disc for you. A strong Recommendation.
Special Thanks to Karl R. for pointing out where this disc originally appeared.