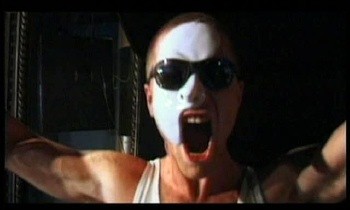 The Movie
It has taken five years for this low-budget Aussie import about a group of vigilantes to reach North American DVD, and before we get too far, let's address the two claims made on the box cover: 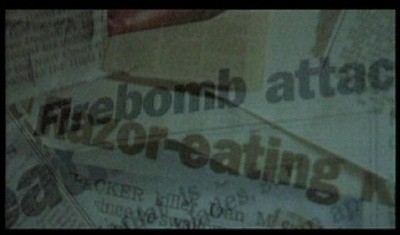 Notice my caution...given that it isn't easy to find much on those statements, I'd dismiss the claims as attention-grabbing PR stunts intended to juice you up for a brutal "true life" story. What we get instead is a very amateur, very familiar film that's been done to death--and better. Nonetheless, Razor Eaters is still a mildly entertaining diversion.

When the film opens, the investigation into the week-long antics of the hooligans has apparently ended, and detective Danny Berdan (Paul Moder) tries to piece events together by watching a box of VHS tapes he discovered at a crime scene. Shot by the gang, the tapes show them talking about their motivation and chronicles their spree. While they may sound vicious, they have a noble purpose--to rid Australia of scum, and give a big middle finger to the obscenely wealthy.

The gang develops a plan to rid Australia of a drug dealer a day and terrorize "other people who deserve it!" (Some of the victims don't seem as deserving of their wrath--unless you think tailgating is an offense worthy of death.) As we learn more about the men and their troubled pasts, we find out why they're so darn angry. The media soon latches on to the story, and citizens voice their support--or fear--as the Razor Eaters eat up the publicity, even making their own t-shirts to promote their mantra: Organize, Traumatize, Immortalize. But as the spree continues, their aggression spreads to government drones and community figures they simply don't like, their standards lowering as they kidnap people for their "Dungeon of Assholes"--one of the more amusing sequences in the film. Zach comes up with a grand plan that takes them to the next level, leading to the film's violent finish and semi-twist ending.

Sound familiar? It should...there's an endless string of films that have touched upon similar themes, and there's nothing original or new here to make this stand out. The men don't seem genuinely frightening--even after they've killed a few people, they still come across as nice actors trying to be mean (kinda like annoying frat brothers). You get lots of yelling and lots of graffiti, and the violence isn't believably graphic enough to be unsettling. Moder does a good job in the lead role, and the gang members can sometimes show a sympathetic side (Cawthorne was a wise choice as the ringleader). Everyone here is trying, though, and takes the material seriously--this is like a really good student film. For a mild, low-budget diversion, you can do a lot worse.

Video:
One of the biggest obstacles to enjoying the film is the simply awful transfer. Presented in what looks like a 1.85:1 presentation, this non-anamorphic video looks like an old, beat-up VHS tape. There's excessive grain and noise, film specs, zero sharpness, aliasing...you name it. And it isn't just with the gang's taped footage; I could maybe understand the point that some of the film is intended to look rough and amateur, but it also looks that way in the scenes framing the taped footage. Even the text in the opening credits looks unfinished and blurry. It's not unwatchable, but boy does it severely hamper the overall experience. One of the extras (an interview) is shot with much higher quality; it's a shame this doesn't look more like that. 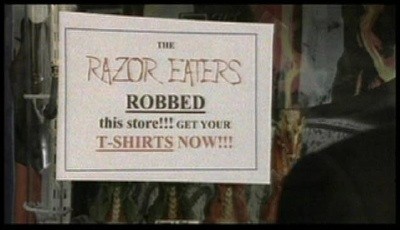 Audio:
The 2.0 stereo track is equally troublesome. Some of the lines sound low and distorted, and are hard to understand--again, it's not so bad that you can't follow things, but it isn't anywhere close to good. 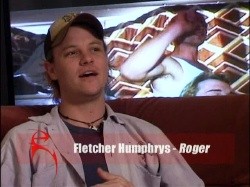 Leading the way are 28 deleted/extended scenes (36:30), followed by a two-minute "montage of shots and images cut from the finished film." The scenes were cut at various points in the post-production process; some are presented in even worse video quality, and some have timestamps. If you like the film, this will probably excite you more than casual viewers. Nothing stands out as being too important, and I question how focused the director was when filming with so much footage left out. You also get the "A Look at FX" featurette (2:32), a brief piece on the techniques used for the pyrotechnic and gun stunts. It features comments from director Shannon Young and actor Fletcher Humphrys, who also supplies his Video Diary (32:20) from the shoot. Also presented in low-quality video, the diary provides some amusing antics and chat behind the scenes (I love the phony trailer narration by the unseen filmer). Rounding out the package are two of the film's theatrical trailers, and a music video of Murderdrive's "Razor Blade".

Final Thoughts:
A low-budget Australian import about a group of vigilantes doling out punishment to drug dealers, bureaucrats and wealthy snobs, Razor Eaters doesn't have anything remarkably unique and fresh to make it stand out from any number of similar films. Even worse is the shoddy video and audio presentation, which really hampers the overall impression and makes it hard to focus on the story. But everyone here takes the material seriously, and those interested in some very cheap, unoriginal thrills can do a lot worse. Rent It. 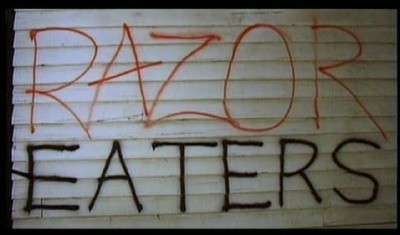