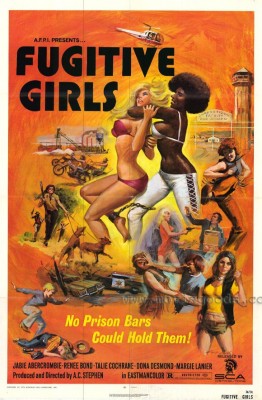 But that's not really what this review's about. Honestly, I find such primitive, nearly plotless sex films to be extremely boring, though I can understand why some might find them fascinating on some level. For an appreciative review from the genre fan perspective, I refer the reader to Casey Scott's well-researched essay over at DVD Drive-In.

No, I opted to review this set for another reason, the name above the title as it were: Edward D. Wood (1924-1978). Today, of course, Wood is known around the world as everyone's favorite Worst Director of All-Time. His attempts to break into the mainstream market with mostly independently-financed, extremely low budget films resulted in a handful of now-famous cult classics: Glen or Glenda? (1953), Bride of the Monster (1955), and, most infamously of all, Plan 9 from Outer Space (1959).

They weren't exactly the worst movies ever made, however. Though cockeyed and incompetent in many respects, they're simply far too entertaining and undeniably personal to be truly rock-bottom. (Don't believe me? Try sitting through She-Freak or The Mighty Gorga to name two far worst examples.) As Bill Warren wrote in his definitive study of '50s sci-fi films, Keep Watching the Skies!, Ed Wood was a man with a vision, blurred and cross-eyed though it was, and no one would mistake his work for that of anyone else. Though terrible his films may be, Wood was a true auteur.

Another writer who understood this was Rudolph Grey, whose 1992 book Nightmare of Ecstasy remains an all-time favorite, one of the funniest, saddest, and most intimate portraits of a filmmaker ever written in English. Presented as an oral history/biography told by Wood's many friends and collaborators, its anecdotes served as the basis for Tim Burton's charming 1994 biopic Ed Wood. Indeed, the first-half of Grey's book is practically a first draft of Ed Wood's script.

Significantly, the Tim Burton film stops well short of telling Wood's entire life story, ending around 1959, almost 20 years before Wood's untimely death. As hypnotically relayed in Rudolph Grey's book, soon after Plan 9's failure the alcoholic director began drinking even more heavily while his career slowly, painfully hit rock-bottom. Shortly before his death, Wood was reduced to living in a crime-infested dump of an apartment in Hollywood on Yucca Street, barely eking out a living writing porn novels. (I'd love to see Burton and Johnny Deep, who played Wood in the film version, reunite for a sequel chronicling this period, which as told by Grey is tragic but at times also hilariously funny.)

Wood and Apostolof later collaborated on two of the three films in this set: Drop Out Wife (1972) and Fugitive Girls (also known as Five Loose Women, 1974), the latter featuring Wood on-camera playing two different characters. It was his last onscreen appearance.

Drop Out Wife is easily dismissed. Angela Carnon stars as Peggy, an unhappy wife with two kids who abandons her husband, crashing at the apartment of swinging single friend Janet, looking to enjoy the same sexual promiscuousness. Subsequently, and boringly, she does just that, sowing as many wild oats as she can. Despite Wood's occasionally loopy screenplay, dialogue scenes exist merely as filler between dull sex scenes that go on forever with generally unattractive women (though Carnon herself isn't bad-looking) and laughably unappealing men.

It's one of those sex films that's about 85% screwing and 15% exposition; if that's what you want then you won't be disappointed. For Ed Wood fans, however, the picture is of minimal interest, though viewers are recommended to fast-forward ahead to an unintentionally hilarious, amateurish miscarriage scene that's singularly Woodian. The back cover of the DVD case claims this version of Drop Out Wife is MPAA-rated "R" but that seems highly questionable. There's full-frontal male and female nudity for much of the film, and some of the sex scenes pretty clearly aren't simulated.

After her boyfriend robs a liquor store (without letting her in on any of his plans), shoots the owner, and abandons her at the crime scene, Dee (Margie Lanier) is shipped off to a minimum security prison farm. There she forms an uneasy alliance with four bunkmates: butch lesbian Kat (Tallie Cochrane), jive-talking black chick Paula (Jabie Abercrombie), white racist embezzler Toni (Renee Bond), and no-account Shelia (Donna Young).

The quintet escape hoping to dig up and split Toni's stolen loot, but greed and racial/sexual intolerance threatens to tear them apart, while at the same time they have to contend with sex-starved bikers, Manson Family-esque hippies and other hazards.

Fugitive Girls has much the same campy, trashy appeal of John Waters' early and intentionally funny comedies, and the amusing performances of Bond and Cochrane especially are like characters out of Female Trouble or Desperate Living. (Liz Renay, co-star of the latter, is featured in the third film of this set.) But Fugitive Girls indisputably has Wood's stamp all over it. The dialogue is ultra-ripe with the same hilariously quotable dialogue as in his '50s films. Wood himself plays two roles in the film: he has a fair amount of footage but minimal dialogue as one of two law enforcement officers on the girls' trail, but really goes to town as Pops, caretaker of a remote airport/gas station. Wood's actually pretty funny in this comic relief part; he's clearly an experienced actor and not an amateur non-actor, but it's also distressing to see the effect years of boozing have had. He would have been about 49 when this was shot but looks 70.

The third film in this collection, Lady Godiva Rides (1969), a Fanny Hill/Tom Jones-type sexploitation knock-off, was apparently made without Ed Wood's involvement, though Casey Scott suggests in his review that perhaps he did. In any case, the film is quite tame by 1969 adult film standards and especially when compared with Drop Out Wife. Inexplicably, this gets an "X" rating while Drop Out's got that questionable "R."

Like Drop Out Wife the picture is mighty tough sledding unless you're predisposed toward such sex film relics, though this tale of Lady Godiva (Marsha Jordan) and Tom Jones' (Forman Shane) journey to singularly un-Puritanical New World actually has honest-to-goodness sets and costumes, and the lighting isn't terrible, though it does have some headache-inducing, Franco-esque zooming. (Incredibly, there's even an ostentatious crane shot!) 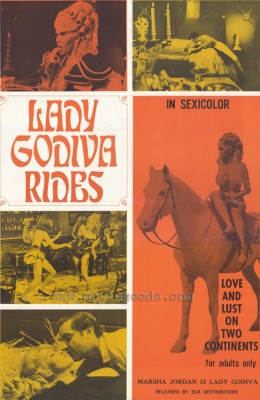 The transfers, three films on three discs, are 4:3 open-matte full screen even though all three appear to have been shot for 1.85:1 projection. The transfers are probably several years old. Ironically, Lady Godiva Rides looks best; it has the sharpest image and best color. Drop Out Wife is quite poor with weak blacks and greenish video murkiness throughout. Fugitive Girls is cut from its original 95-minute running time to 82 fast-moving minutes, all extended sex scenes, but I'm not objecting. The real complaint is the quality of the transfers generally, which is well below par, a shame considering S'More Entertainment is a label with an interesting, likeable catalogue.

The original mono audio (remixed for 2.0 Dolby Stereo here) is just okay. There are no subtitle or alternate language options. The discs are region 1 encoded.

Supplements are limited to a few trailers in a condition comparable with the films, some stills, and a pretty good text biographies of Apostolof and Wood.

The Lascivious World of A.C. Stevens & Ed D. Wood, Jr. is tailored for two narrow, finite audiences: admirers of prehistoric porn and fans of Edward D. Wood, Jr. and his loveably terrible movies. As someone falling into the latter category, Lady Godiva Rides and Drop Out Wife provides little interest and even less entertainment value, but the deliriously over-the-top Fugitive Girls is a lot of fun and fits nicely with Wood's other pictures. S'More Entertainment might have done better to concentrate on that title, spring for a new transfer and load it with the kind of extra features that would appeal to Ed Wood fans, but for the money it's not a bad value. General audiences will want to Skip It, but for those with an affection for these kinds of movies it's moderately Recommended.

Writer Stephen Bowie correctly adds, "Stephen Apostolof's pseudonym is usually given as 'A.C. Stephen' (isn't he credited that way on-screen in those films?), not 'Stevens,' so it might be worth pointing out that the cover of the collection basically gets it wrong."