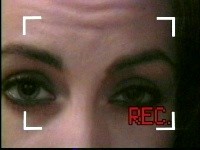 The Movie
Really? Movies like this can actually be made and sold to us in stores and on big-name retail websites? Producers actually think they should spend money to unleash such limp product on the public? Oh, dear readers...where to begin to describe the utter ineptness? How about the opening shot, when our "heroine" struggles as her wrists and mouth are covered with duct tape so cheap, it actually starts to fall off her mouth. (Never mind the fact that she could easily tear it off with her hands, which are bound in the front!)

I have two warnings for you before we go any further: This film isn't even listed on IMDB, and this review uses a lot of commode mouth quotes from the film. Read at your own risk...

Meet Lucinda, an angry chick who spends her time watching serial killers and rapists so she can learn how to do it, filming herself and her subjects and giving confessionals along the way (where we learn how her desire started at a young age). "I want to turn my murder into art...pretty soon, I will no longer be an artist. I will become a fucking work of art!" I won't even mention the films that do this far better, because it would be an insult to utter them in the same breath as Aspiring Psychopath.

You'll quickly discover how the filmmakers try and stretch five minutes of bad material into 75 minutes of excruciating awfulness:

1. Have the cast repeat the same lines to each other repeatedly. Recite this exchange about five times over:

2. Have Lucinda ask and answer her own questions out loud: "Get the bag...now what do you think you're gonna do with that bag? This is what you're gonna do..."

3. Cuss and yell a lot. At one point I decided to rewind and count the number of times a variation of the word "fuck" was used in a 90-second period (starting at 19:55). I heard 16, which led me to wonder how the three writers of this movie (!) might have tag-teamed on the script:

(insert sound of Writers 1 and 2 clapping in approval...)I'm also guessing the writers are all 12-year-old boys: how else to explain such "cool" scenes as a lesbian kiss that leads to Lucinda shoving her naked victim in the tub (it's a landing strip, in case you were wondering) before she kills her with a hot iron, burning her all over? (And by "hot", I mean cold...and by "burning", I mean slowly letting the iron hover just over the woman's skin--they don't even try and put burn marks on her between edits!)

You also got a lovely soliloquy in which Lucinda talks about killing a baby: "I fucking hate kids...I fucking smashed that baby to shit, and I just loved every single minute of it, because every fucking moment that I was slamming that baby's head in, I just knew that I was doing it a favor...that baby ended up going out the window, although it didn't really feel anything when it hit the ground. But still, I really don't miss that baby. Little fuckers."

Wow...this chick means business! Killing babies? Awesome! This film is so rad...it really has my attention now! Although I was a little confused later when Lucinda talked about killing a heroin dealer because he was selling to kids: "I know I hate kids, but..." Uh, but what, Lucinda? Your three lazy writers ran out of ideas and wrote your back story into a corner? And as for that kill, it starts with her giving the guy a blowjob as the camera pans down to his zipped-up jeans (The Immaculate Suction?) before venturing into porn territory by showing her suck a (fake) dick head that she soon bites off and spits back at him. Classy!There's plenty more absurdity, like in the opening scene where Lucinda doesn't kill her potential rapist, opting to tie him up, pour sugar on him (I'm not making this up) and leave him in the woods: "The sweet taste will draw all sorts of insects to eat your insides! You'll be eaten inside and out!" Huh?! She knows this was filmed in Pennsylvania, not the Amazon, right? She also provides some taped flashbacks of her early kills, including my favorite: Melissa Franklin (as "college victim") half-heartedly collapsing her head to the table (think Dying 101 class) after overdosing on Splenda.I can't even begin to describe how bad the acting is--as Lucinda, Danielle Donahue stumbles through voiceovers where she doesn't even have to be on camera, resorting to the cuss-and-yell method of emoting. And when she has an exchange with a serial killer that she follows and later tortures, she has to steer the actor back on track when he gets confused and says the wrong line:

Serial Killer: "Why the fuck should I follow you and show you what I know?"
Lucinda: "I'm gonna follow you...dumbass!" (okay, so she doesn't say dumbass, but it's totally implied...)

And I haven't even told you about the "police station" scenes (by police station, I mean the director's kitchen) with Dr. Hess and Detective Grant (Joel and Catherine Wynkoop). They have no shame as they read their lines off their scripts--with highlighted lines--on the table (!) while discussing Lucinda's carnage. Apparently Joel needs to upgrade to trifocals: "If only someone would have noticed and interveined." Uh...doc? It's intervened.The film tries to make that tired connection of blaming television and the internet for Lucinda's psychosis, frequently editing TV grain and other magnified screen images into scenes (the images are virtually unrecognizable, probably because they couldn't afford to pay for anything...although you do get to see a close-up of George Bush's lips a few times, by far the scariest thing in this film).

And that brings me to the hilarious camerawork: This film looks like it's a 2.35:1 image presented full screen--and then magnified 100 times. The camera likes to linger between the actors, so we're left with extended shots of the ground, the wall and anything else hovering in the background, with heads frequently off frame. That technique really comes in handy for the kill scenes, where "special effects" are reduced to mostly-implied acts enhanced by--that's right!--cussing and yelling.

Lucinda has one appropriate line in the film: "This is getting kinda boring." It comes right after the 54-minute mark, about 53 minutes and 55 seconds too late. Just call director Ryan Cavalline the Aspiring Filmmaker (keep trying bud! Actually...don't...)

Video:
It's full frame, full of grain and full of cheap looking video quality throughout.

Audio:
The 2.0 stereo has awful balance, with the loud voices sometimes distorted. They frequently sound like they're in a tunnel. At one point, Donahue was yelling so loud for so long, I turned my TV and receiver volumes all the way down and still heard her... 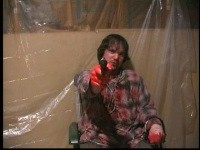 The behind-the-scenes footage (10:47) is telling, in that the actors appear so disinterested--almost bitter--that they are doing this film, as if the director was holding them at gun point. "Fuck you, Ryan!" says Eddie Benevich (who plays "serial killer") without any sense of sarcasm, genuinely irritated as he aims the gun at the camera. "Fuck the movie, fuck the people, fuck (production company) 4th Floor...you guys suck!" Oh, Eddie...I couldn't have said it any better! Also caught on camera is a crew member telling Ryan to "Give me the money, bitch!" and musings from Donahue on her character. You also get the film's equally cheap trailer.

Final Thoughts:
Is there anything lower than Skip It? How about Spit on It? Or better yet, Slam It to the Ground and Smash It with Your Sketchers, then Pee on It and Throw It into the Potomac? (What up, DC? Holla!) 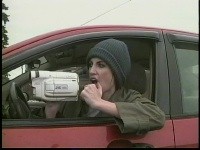