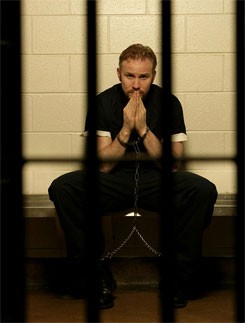 30 Days' simple premise borrows from the old proverb, "Walk a mile in another man's shoes." For his film Super Size Me (2004) Spurlock endured 30 days of an all-McDonald's diet but for his TV show the set-up is somewhat altered toward a more fish-out-of-water approach. In the second season episodes, for 30 days a border-obsessed activist from Project Minuteman lives with a family of illegal immigrants, an American white collar worker whose job is outsourced looks for work in India, an atheist lives with a family of Christians, an abortion rights activist lives in a Christian pro-life center, etc.

The wonderful thing about 30 Days is that it strenuously avoids what you would expect to happen. Things get pretty tense, but the two sides never ending up coming to blows, nor do they wind up shouting at one another like television news pundits from opposite ends of the political/social spectrum. No one radically changes their original position; the atheist isn't "saved," the anti-choice couple don't have an epiphany about women's rights...but the anti-immigration Minuteman doesn't sic the cops on the struggling Mexicans come day 31, either.

The show's big strength is also, arguably, its major shortcoming: it's so anxious to present both sides of every argument even-handedly that it's generally apolitical and at times comes off almost wishy-washy, even when it occasionally takes a position on a particular issue. The middle-aged atheist mother is so polite with the conservative Christian family and vice versa there's little direct dialogue; in not wanting to ruffle any feathers the episode becomes interesting in other ways, watching the tension as each side avoids confronting the other. The show wants there to be some semblance of understanding of and respect for the other side's position and perhaps unexpected humanity, but at times this comes off as forced.

Conversely, the fact that 30 Days deals with these issues at all, literally face-to-face, is impressive. Who but Spurlock would even do a show questioning Christian fundamentals in a manner that's respectful of both Christians and atheists? Whichever side the viewer finds himself on each show, 30 Days impresses in the way its personal approach facilitates answers to myriad questions we have about "the other side," daily existence in lives so different from ours we can only imagine. What's life like for an Indian working in its new high-tech telemarketing industry? What exactly are pregnant women being told in these Christian-run shelters? What's life like for a family of illegal immigrants, for an anti-immigration activist?

Of course, the great irony here is that this eminently fair and balanced show should be the (co-) product of Rupert Murdoch's scurrilous News Corporation, the $30 billion neoconservative propaganda conglomerate.

Except for the so-so show on New Age lifestyles, 30 Days' second season is a real winner, with the best shows coming first and last. "Immigration" is fascinating on many levels, not the least of which is the hard-core Minuteman chosen to stay with the illegal immigrants living in East L.A. is Hispanic himself, a Cuban who legally came over with his family during the revolution. He comes off, frankly, as a real wing nut unable to see the forest for the trees, and watching the show one really thinks he's going to nark on the family as soon as his 30-day stretch is up. That doesn't happen, and most of the family grows to like him on a personal level, in spite of his insistence on intellectualizing the problem. The show, worthy of a feature-length theatrical documentary all by itself, has many great moments: a visit to the hovel the family left behind in Mexico, and a kind of subplot following the oldest daughter's efforts to get into college, the first in her family with a shot at a college degree.

As with Season One, Spurlock is at the center of just one episode, the final show that's in a format that somewhat breaks away from its predecessors. Spurlock heads to the slammer in "Prison," enduring 30 days in the pokey, fighting extreme boredom, crazy cellmates, lack of fresh air and windows, 60-cent meals, etc. It's fascinating stuff, a real terrifying glimpse at the particulars of prison life, and of a privatized industry disinclined toward any improvements and prisoner rehabilitation that might impact their bottom line.

In between are other good shows that offer a pleasantly varied tone. The outsourcing show is generally quite humorous (wait till you see the Indian class on speaking "American") while still making its point about the corporate-driven tragedies occurring both in America and among poor Indians. Its subject is particularly well-cast; the bemused white collar worker is alternately culturally open-minded about Indian ways yet also honest about his own prejudices; it's a fascinating, funny show.

The six hour-format shows (running approximately 45 minutes without the commercials) are presented on two single-sided discs, at least they were on the check discs we received. These check discs had poor audio with much distortion on the first episodes; presumably that will be cleared up before final product is distributed. The shows are full frame and offer professionally mixed stereo audio.

Obviously aware that the first and last shows are strongest, each include an audio commentary with many of the key production personnel and a few of the on-camera subjects. These proved interesting supplements that expand on the particulars and production issues raised in the shows (such as maintaining the illegal immigrant family's privacy) and provide updates on some of the on-camera talent.

30 Days is a real viewer-friendly program few could object to even as it explores some of the most contentious issues of modern American life. It's really a must-see show, something American television could use more of, and comes Highly Recommended.