Zipporah Films // Unrated
List Price: $34.95 [Buy now and save at Zipporah]
Review by Chris Neilson | posted July 8, 2008 | E-mail the Author
Of late, we here at DVDTalk have had the pleasure of reviewing a large number of DVDs from documentarian Frederick Wiseman. More than a dozen reviews of his work have been completed, or are presently in the works here by David Cornelius, Stuart Galbraith IV, Francis Rizzo III, and myself. The titles under review span Wiseman's career from his most recent film, State Legislature (2006), to this one for Titicut Follies (1967), his earliest and still most famous film.

Titicut Follies documents the treatment of inmates at the Massachusetts Correctional Facility for the criminally insane, located 28 miles south of Boston in the town of Bridgewater. Filmed over 29 days in 1966, Titicut Follies provided a grimly stark exposé on the deplorable conditions in which the State of Massachusetts incarcerated much of its most mentally-ill male citizenry. While some of the inmates had perpetrated serious crimes for which they had been found not guilty by reason of insanity, many were incarcerated on thin grounds and with little due process. 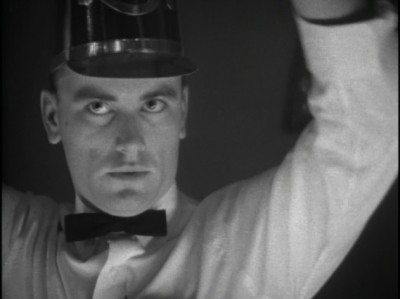 Titicut Follies takes its name from the New Year's Eve variety show put on by the staff and featuring musical acts by inmates who are more likely to look lost, confused, and frightened than happy to be performing. The staff's indifference to the discomfort of the inmates is disappointing, but it is benign in comparison to the routine treatment of the inmates who are frequently manhandled, incessantly badgered or condescended to, and abused and degraded in a myriad of ways. Sessions with the psychiatrist are cold and accusatory with little apparent therapeutic purpose. Inmates are typically kept naked and housed in barren, isolation chambers without plumbing, cots, or personal effects. The guards' behavior towards the inmates ranges from indifference to sadism. 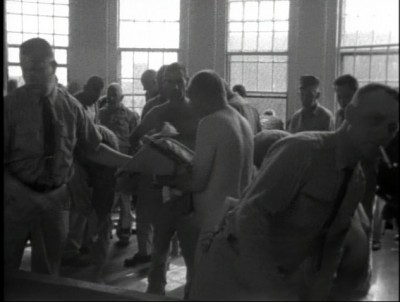 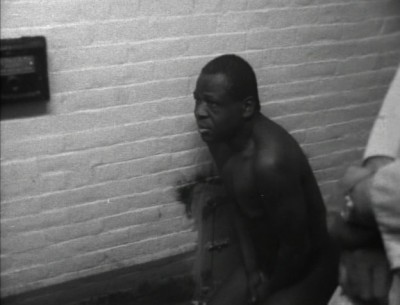 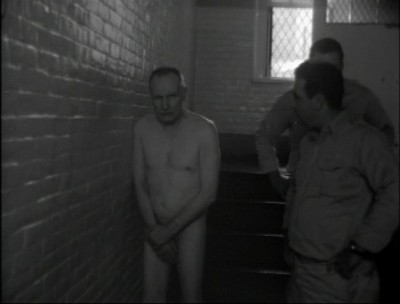 The State correctional authority seems to have been completely unprepared for how this film would portray the Bridgewater facility. Though Wiseman did not rely on a musical score, commentary, intertitle, or interview of any kind, his decisions regarding what to film and how to edit it, clearly suggest disgust with the conditions at Bridgewater. The images speak for themselves, but as edited, Titicut Follies is the most advocacy-oriented of Wiseman's 36 films to date. For example, footage of a bewildered inmate being indifferently manhandled during a shave is intercut with footage of an inmate being force fed through a tube in his nose, and with footage of a deceased inmate being prepared for burial. Collectively this montage is open to a number of interpretations, but perhaps the strongest is that the living inmates are as dehumanized and powerless over their circumstances as the dead. 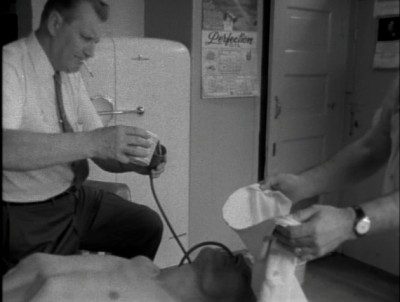 Though Wiseman had obtained waivers on behalf of all the participants, including from the Bridgewater administrator as legal guardian of the inmates, the State of Massachusetts tried to quash the film alleging privacy concerns. Following an unsuccessful attempt to block the film's inclusion in the 1967 New York Film Festival, the State succeeded in persuading Massachusetts Superior Court Judge Harry Kalus to ban the film. This decision was partially upheld on appeal, allowing the film to be viewed in Massachusetts only by students and professionals in the legal and health care fields. This statewide ban on general distribution was the first for a film on grounds other than indecency, profanity, or national security in reported U.S. history.

After nearly a quarter century, the ban finally fell in 1991, though the State of Massachusetts continues to meddle in the film, as evidenced by the following intertitles, the only ones in the film: 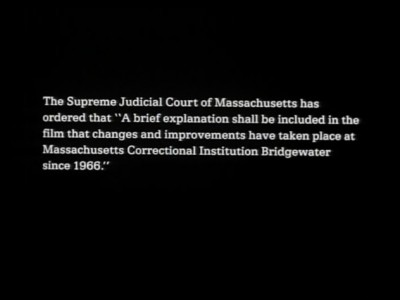 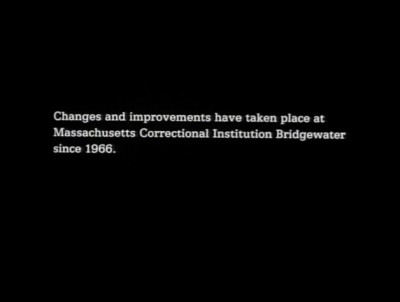 The DVD
Titicut Follies is available for purchase directly from Frederick Wiseman's film distribution company Zipporah Films. The film is burned onto a DVD-R, and comes in a standard-sized alpha case with laser-print artwork. There are chapter stops but no scene selection menu. 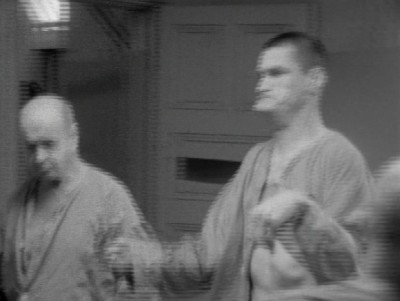 Titicut Follies is shown in its original aspect ratio of 1.33:1. There's evidence of some debris in the film gate on the original black-and-white 16mm negative. There also appears to be subsequent dirt and scratches on the print. Finally, there's interlacing artifacts as well likely attributable to the analog to digital conversion. Collectively, the film shows its low budget roots, age, and modest budget for digital transfer, yet the image when viewed at speed is mostly acceptable. 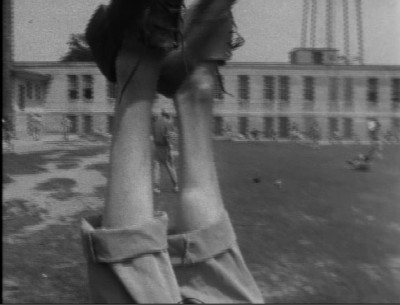 The Audio:
The mono audio track is distributed to the left and right front speakers. The audio track is mostly free from post filming distortion and dropouts, but audio fidelity at the time of the filming was less than great. Some dialog is unintelligible, and no subtitles are provided.

The Extras:
The Zipporah Films website notes "In keeping with Mr. Wiseman's filmmaking style, no commentaries or extraneous materials have been added [to any of his releases]." While I can appreciate that Mr. Wiseman wants his films to stand for themselves, an independent companion documentary, akin to Banned in Oklahoma found on the Criterion Collection release of The Tin Drum, concerning the subsequent legal controversy surrounding this film would have been a welcomed extra providing additional context without impinging on the work of Mr. Wiseman.

Further, a biographical documentary about this great American filmmaker is sorely overdue, and I can think of no better place for it than as an extra to accompany this his most important film.

Final Thoughts:
The first film by attorney-turned-filmmaker Frederick Wiseman, Titicut Follies, was a landmark achievement in cinéma-vérité, an indictment of the mental health system so powerful that the authorities felt compelled to quash it, and a record for the ages, lest we ever forget. On these intrinsic merits alone, Titicut Follies is as deserving of DVDTalk Collector Series status as any release ever reviewed here. What reservations I have about this release are extraneous to the merits of the film itself, and principally concern the high price for a bare bones release of lackluster technical quality.

With these reservations in mind, I highly recommend the present release of this landmark film, though I hope that sales of this release will generate sufficient interest to prompt Mr. Wiseman to consider licensing this film to a distribution house like the Criterion Collection, Masters of Cinema, or Second Run DVD that can give it the treatment it deserves.