Disturbing and incredibly revealing Tunisian director Nouri Bouzid's Making Of attempts to understand suicide terrorism, those who choose to become martyrs using religion as an excuse for their criminal actions. Pic's stripped of political correctness narrative goes as far as possible without becoming a nihilistic exercise of propagandizing religious fundamentalism.

Twenty-five-year-old Bahta (Lotti Abdelli) is fascinated with break dance. He spends most of his time dancing on the streets where his friends admire his talent. But the local police authorities aren't happy with Bahta's performances. They often harass the young man even though he never breaks the law. Fed up Bahta decides to leave his country. He steals his grandfather's savings hoping to purchase proper documents for his trip. Unfortunately he is cheated and forced to run away from his family. A group of religious extremists sees in Bahta a man ready to become martyr.

It has been nearly three years since I saw Hany Abu-Assad's Paradise Now (2005), a film about the last days of two suicide bombers planning to end their lives in Jerusalem. Powerful, disturbing, and simply unforgettable Paradise Now was the first film to address religious martyrdom with a degree of seriousness many found to be controversial to say the least. Then came Joseph Castelo's The War Within (2005) where we were offered a different look at the mechanics of terrorism. Preparation, execution, and justification were all addressed in a manner attempting to add some logic to the madness shown on the screen. 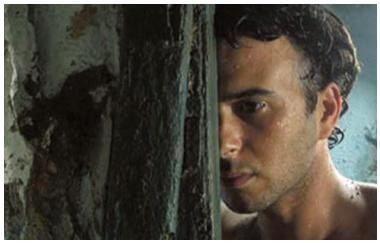 Making Of follows the same route. This is a film whose primary agenda is to explain how terrorism comes to exist, what forces a man to become martyr. While some will certainly find the explanation Nouri Bouzid provides questionable others will look at it with much fear and concern understanding that Making Of is anything but an unlikely scenario.

The core of Making Of also boasts the same degree of cold minimalism Paradise Now does. Aside from a few early scenes where Nouri Bouzid focuses on the main protagonist's fascination with break dance the rest of the film feels more like an analysis of religious fundamentalism than a mainstream drama, thriller, or whatever other genre you may wish to use to categorize the story.

What separates Making Of from every other film about suicide bombers we have seen thus far is the introduction of faux making-of segments incorporated directly into the story, hence the universal title of the film, Bahta/actor is seen arguing Nouri Bouzid about the message of his film. The effect is quite unusual and necessitating a bit of time to get used to but placed into context incredibly well thought of.

Presented in an aspect ratio of 1.78 and enhanced for widescreen TVs Making Of arrives with a good transfer showing strong detail and color scheme. There is plenty of intentional grain here which grants the film with a fittingly strong grittiness (the "making-of" bits in particular look very raw and stick out as the director intended). There are also a few specks and scratches here and there but I assume that they were inherited from the master Koch Lorber Films had to work with. Furthermore, edge-enhancement was something I noticed but it was well under control and far from being an issue of concern with this transfer. Finally, this progressive print is very much in tune with what Koch Lorber Films have delivered in the past - there are moments where we have borderline "combing" patterns popping up. I don't know how exactly Koch Lorber Films transfer their prints to avoid PAL-NTSC issues but sometimes there is a mix of things happening and this release definitely has a bit of everything.

Presented with an Arabic DD 2.0 track Making Of sounds quite well. The dialog is very easy to follow and audio is well balanced throughout. I did not detect any pop-ups, hissing, etc. It is somewhat of a disappointment that this R1 disc does not offer a more elaborate sound presentation but what we have is nevertheless suitable. Optional English subtitles are provided as well.

There are two bits of supplemental material on this disc. First there is a short introduction by Peter Scarlet, Artistic Director for the Tribeca Film Festival where he explains how he encountered Making Of. Next, there is a full blown and very informative interview Mr. Scarlet conducts with Nouri Bouzid, in French with English subtitles, at the Taomina Film Festival where the director talks about his film, its message, and how it was made possible.

A revealing and above all very disturbing film about religious fundamentalism Making Of will surely leave an indelible mark amongst those who follow World Cinema closely. The R1 release by Koch Lorber Films is of good enough quality with a great interview by the director of the film Nouri Bouzid.