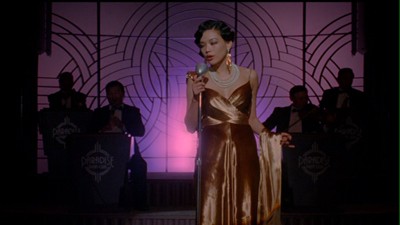 There is an easy comfort to a period film. If I like the era and the costumes and sets look nice, I can probably sit through just about anything and enjoy it for the sense of time and place the movie creates. For instance, as a fan of jazz-age gangster pictures, it doesn't take more than a couple of guys in nice suits sipping cocktails at a speakeasy to get me to go all-in. Thus, it's all the more damning that a movie like Blood Brothers (Tian tang kou) would so lose my interest, I was tempted to fast forward through the final twenty minutes and just read the subtitles. Given that Blood Brothers is also a Hong Kong action flick, that's also about when the final bloodbath is going to start. I was so bored, I wasn't even invested in watching the objects of my boredom get killed.

Set in 1930s China, Alexi Tan's directorial debut is allegedly a remake of John Woo's 1960s period piece A Bullet to the Head. My memory of that movie is apparently different than anyone involved with Blood Brothers--including Woo himself, acting as a producer on this film--because I didn't even realize it until I did further research. Any resemblance between that violent touchstone of HK cinema and this picture is superficial at best.

Three young men leave their small town and go to Shanghai to pursue life in the big city. There is the thoughtful Fung (Daniel Wu, Beijing Rocks), the kind and meek Hu (Tony Yang), and the impulsive leader, Kang (Liu Ye, Curse of the Golden Flower). Kang and Hu are actually brothers, but their bond with Fung is just as close. Where one goes, so go they all. Once in Shanghai, Kang gets a job at the Paradise Club, a jazzy hotspot run by mobster and movie impresario Boss Hong (Sun Honglei, Mongol). When Kang tries to get his pals jobs, as well, the trio is sent on a heist. It goes wrong, leading to an outbreak of violence, bringing even the reluctant Fung deep into the criminal underworld.

Becoming real gangsters, Kang lets the lifestyle get the better of his ego, while Hu loses it completely, turning into a whiny drunk. Fung stays on the periphery, too much in his own head to really be a bad guy. He rescues Hong's chief enforcer, Mark (Chen Chang, Eros), on the night where Mark's secret plan to kill the Boss goes awry, an act of kindness that inspires even Mark to tell Fung he should go back home. Fung stays for his friends, however, as well as for his new crush, Lulu (Shu Qi, Millennium Mambo), the gangster moll whom he doesn't realize is two-timing Hong with Mark, and thus is the reason for the gunman's betrayal. Life isn't this complicated back in the provinces.

Eventually, all the secrets are exposed, the friends must all choose which side they are on, and a lot of people end up dead. All of the characters play to type, but there is little more to the writing than that. The actors mainly try to keep it cool, though both Liu Ye and Tony Yang get pretty hammy the more intense the story becomes. Not that there is much tension on screen, mind you. For all the danger and the anger and the tears, Blood Brothers is rather bloodless. Even for a genre picture, the fates most of the characters meet seem predictably inevitable, making Blood Brothers the equivalent of a cinematic blinking contest: who will give in first, you or it.

For all my harsh words, I wouldn't exactly call this movie terrible. I was relatively invested in the first half. The Paradise set is gorgeous, as is Shu Qi, who slides into the glamour of the '30s quite convincingly. There is just a feeling that we've seen this all before, and we've seen it done with much more vigor. Had you told me Blood Brothers was a remake of Zhang Yimou's Shanghai Triad rather than A Bullet to the Head, I would not have been surprised. The trappings are all there, all the movie needed was a greater sense of purpose. I could have even forgiven the flat writing had Alexi Tan not been so stingy with the action and had the violence distinguished itself in any way. His slow-mo cameras and the swelling orchestral tides suggest that Tan wanted to achieve Woo's level of operatic gunplay, but instead, Blood Brothers is more like a game of dress-up. More Our Gang "Hey, kids, let's put on a show!" than Wagnerian sturm und drang. 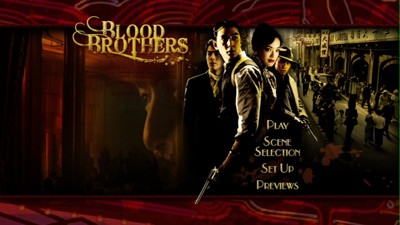 Video:
Blood Brothers was shot in widescreen at a 2.35:1 aspect ratio, and the 16X9 transfer for the DVD mostly looks pretty good. Though I saw some haloing in a few scenes, and one case of a shimmery image, most of it looks fine, with bright colors and solid blacks.

Sound:
There are two mixes for the original Mandarin soundtrack: a Dolby 5.1 mix and a stereo 2.0 mix. Don't be fooled by the DVD's back cover, which advertises an English 5.1 dub, there is no such thing. In fact, according to the packaging, you would think that this movie was entirely in English, as no other languages are listed. It is not, it's in Chinese, and the audio mix sounds good, with a nice interplay of sound effects and dialogue.

Unfortunately, along with not notifying the graphic design team, someone forgot to tell the subtitle department that things were changing and so the subtitle specs on the cover are correct, but likely not the ones most North American viewers are looking for. Instead of subtitling this movie as if it were a foreign language film in need of English subtitles, the only English available is the track for the deaf and hearing impaired. This will likely annoy some who would rather not have to read descriptions of all the sound effects.

There is also a Spanish language subtitle option.

Extras:
First Look Studios includes the original theatrical trailer for Blood Brothers, along with a handful of other trailers for recent releases, some of which play as the disc loads, some of which are accessible through the menu, and some of which appear both times.

FINAL THOUGHTS:
I wish there was more to recommend Blood Brothers, because all the pieces are there to have a pretty, engaging period piece. Sad to say, Alexi Tan's 1930s remake of John Woo's A Bullet to the Head fails to ever truly engage the material. Flat characters, a by-numbers story, and ho-hum violence take the glitz and glamour of jazz-age Shanghai and turn it into a dull bauble. Add that to the lazy DVD authoring, and I say Skip It. 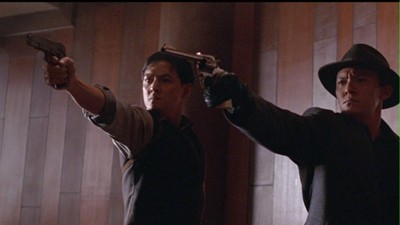