Throw of Dice, A 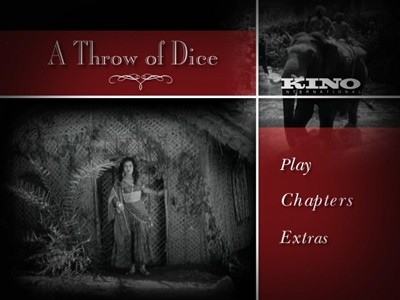 A Throw of Dice (Prapancha Pash) is one of those fascinating historical discoveries that reminds us how quickly movies spread across the world. This 1929 silent film is a co-production of the nascent German, English, and Indian film industries, a truly international effort that works with universal themes in a unique setting. Directed by the German filmmaker Franz Osten, the story is based on a classic Sanskrit poem called The Mahabharata, and it was shot entirely in India, using the country's landscape and its people to make a love story that reflects the Indian culture.

The story of A Throw of Dice focuses on two rival kings and the woman stuck between them. King Sohat (Himansu Rai, also one of the film's producers) and King Ranjit (Charu Roy) are compulsive gamblers who are constantly trying to one-up one another. On a hunting trip where more games of chance are played than game is shot, they encounter a healer (Sarada Gupta) who renounced Ranjit's court after seeing in the stars that gambling would be the ruler's downfall, choosing instead a hermit's life with his daughter, the beautiful Sunita (Seta Devi). Both monarchs fall for the girl, but only one assumes there will be no competition. Sohat plans to kill Ranjit and take his kingdom, hopefully picking up Sunita in the process. A healer being so close by wasn't factored into the plot, however, and Sunita and her father nurse Ranjit back to health. Against her father's wishes, Sunita agrees to become queen and returns with Ranjit to his palace.

Of course, if you're Sohat, you're not going to give up that easily, and he makes a greater push to get what he wants, implicating his rival in a murder plot and then luring him into a rigged dice game to steal his kingdom, his dignity, and his bride. Will love conquer all, or was Sunita's father right and fate is already decided?

There's not much in terms of the melodrama that distinguishes A Throw of Dice from other films of the period. It's not a huge stretch to guess where it will go. The actors are all quite good, and Osten has a strong sense of cinematic flow, so in terms of sheer quality, it's a solid effort. There is a lack of self-consciousness on screen that is quite surprising to see in silent cinema, particularly when being shot in such an out of the way place.

And that's what really makes a A Throw of Dice special: its setting. There is a grandeur in the real locations and the period costumes that is competitive with the spectacle of early Cecil B. DeMille. The hunting scenes feature real animals in the jungle foliage, and the sense of two worlds, of the natural world where Sunita has been raised and the opulent palace life, is well established by Osten's choices. Connecting the two are brief glimpses of life in the streets, of the real poverty of the common man. Contrasting with that are the pre-game preparations for the royal wedding and also the entertainment in the court, where we see contortionists, snake charmers, fire eaters, and the like. Osten wants to show all aspects of Indian life, and unlike a Hollywood film trying to capture exotic locales on a California backlot, A Throw of Dice reverberates with authenticity. 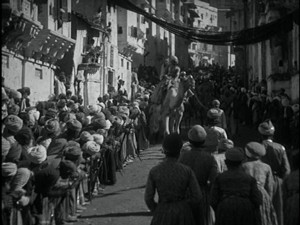 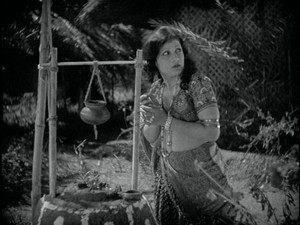 Video:
A Throw of Dice is presented in its original 1.33:1 aspect ratio, and the black-and-white picture looks amazing, particularly for a film that is nearly eighty years old. The image has been restored quite well, and though some scratches still exist here and there, these instances are minimal. The picture also stays steady and there aren't any jarring edits.

Sound:
The new score by Nitin Sawhney (The Namesake, Pure) is given a solid, straightforward mix. I was a little underwhelmed by the music, in all honesty. I felt sometimes Sawhney orchestrated the music a couple of dramatic notches over the images on screen, thus calling a little too much attention to his efforts. There are a couple of uses of vocals, as well, which actually work better in the context than some of the larger instrumental swells.

The intertitles look vintage and thus feel organic to the movie.

Extras:
A thirty-five minute interview with composer Nitin Sawhney covers how he got involved with the restoration project, his intentions and influences, live performance, and general talk about the film itself.

The DVD has a stills gallery from the production, and the DVD also comes with an 8-page booklet featuring photographs and extensive production notes by film historian Bruce Bennett.

FINAL THOUGHTS:
Recommended. Though the love story of two rival kings competing for the same woman is fairly standard in terms of silent cinema melodrama, the 1929 picture A Throw of Dice is a wonder to look at. Set in India, it features glorious locations, beautiful costumes, and lots of local color. A quality presentation from Kino really puts the excellent filmmaking center stage. A Throw of Dice is a true treasure from the vaults. 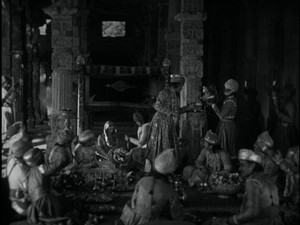 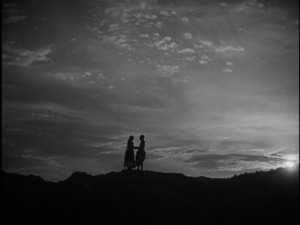