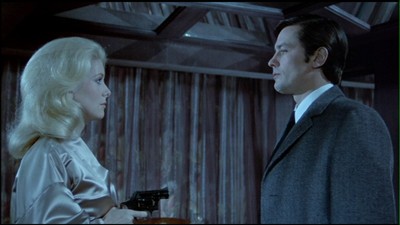 It's an opening as old as cinema itself. Three men walk into a remote bank, leaving one waiting in the getaway car. Armed with guns and trenchcoats, they rob the vaults. Intercut with this action are scenes of a cop on his nightly rounds, following up on calls, talking to informants. The robbery is precisely planned, while the policeman's trek is subject to the whims of his city; the cop tries to bring order to the human chaos, whereas a robbery goes wrong precisely because the human element can't be controlled.

In most movies, both of these events--particularly the bank heist--would move at a rapid pace, but because Dirty Money (a.k.a. Un Flic) is a film by Jean-Pierre Melville (Army of Shadows, Bob le flambeur), these scenarios play out slowly, at a measured pace. The robbers are stoic, speaking only when they have to, weighing each move they make. The cop, Edouard Coleman (Alain Delon), does his job gravely and by the book, meting out justice indiscriminately, but also being fair when it counts.

Made in 1973, Dirty Money is Melville's final film, and it provides a cynical coda to his career. Dropping the Eastern philosophy that he used in some of his earlier crime pictures with Delon (Le Samourai, Le Cercle rouge), this time Melville opens with a quote from 18th-Century criminologist François-Eugène Vidocq: "The only feelings mankind has ever inspired in policemen are those of indifference and derision." Delon will later repeat these words, showing the weariness of his character. People will do the wrong thing, they always do.

Commissioner Edouard has no idea how right he is, in fact, or how tangled in the crime he has become. Nightclub owner Simon (Richard Crenna) is the man behind the bank robbery, and the money is meant for a larger heist, robbing a drug mule (Leon Minisin) on a train heading out of Paris. It just so happens that Edouard is also on the trail of those drugs, working with a cross-dressing snitch, Gaby (Valerie Wilson), to bust the courier when he arrives with the goods. The cop has no idea that the two cases are connected, nor does he realize that Simon is involved, a fact that is going to strike a little too close to home. As it turns out, Edouard is having an affair with Simon's girlfriend, Cathy (Catherine Deneuve). When it comes time to make his move, this connection is going to muddy the motivational waters for Edouard. Does he make the choices he does because they are the right choices, or is there something deeper, more selfish than that?

The ending of Dirty Money actually fits quite nicely with the overall themes of Melville's filmography. As a police detective, Delon's character makes his decisions, right or wrong, and is forced to live with them. It's a harsh ending, but Melville's heroes (and anti-heroes) have always struggled with a world that seems to lack something fundamental, be it the honor of the warrior in Le Samourai or their basic moral freedoms in Army of Shadows. I am not comfortable saying that Melville has given up on his fellow man completely, but he definitely seems disenchanted, as if there is no real solution to the struggle. The final image, the ringing phone going unanswered, leaves us feeling that something has passed, that Edouard is done, he no longer sees the point of trying to stop the bad guys when even the woman he loves would betray him. Cathy gets the most portentous line of the movie when she says to Edouard, "Dead men arrest no one." She then points a gun at him in jest, and he might have been better off had she shot him then and there. Eventually, she will kill him (metaphorically) without ever drawing a weapon, destroying something inside of him, and getting away with it. (His walking away from her has a kind of thematic rhyme in his releasing the transvestite informant. Both women have beautiful blonde hair, and both disappoint Edouard. Yet, with the snitch, it's Edouard who breaks her heart. He wrongfully believes he can't count on her any longer, but the truth is Gaby can no longer rely on him. The man dressed as a woman is the only one who is everything she seems.) 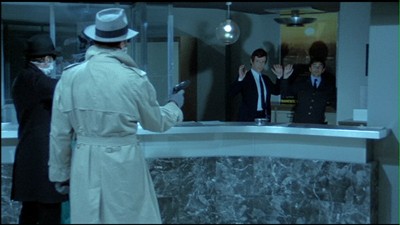 The English title being used for this DVD is a bit misleading, it makes us think that the stolen cash will somehow end up in Edouard's hands, that this will be a story about a corruptible officer of the law. The original French title, Un Flic, which simply translates as A Cop, is far more fitting. It puts the movie in line with Le Samourai, making them bookends to a larger story, each about lonely men on their own side of the law trying to do what they think is right, stuck in a system that would have them stick to one way of doing things even when that way is clearly flawed. The Paris of both films is remarkably similar. Simon and Cathy's nightclub could just as easily be the one Delon visits as Jeff Costello in the earlier picture. Except here, Melville and cinematographer Walter Wottitz cast the events in a blue pallor, as if a melancholic ennui hangs over all of France. Life is stuck in a perpetual, topsy-turvy lie of day-for-night.

Beyond his general concerns of genre stories as philosophical vehicles--or perhaps in conjunction with the same, given his methodical approach to the crimes--as with any Jean-Pierre Melville crime picture, the robberies are meticulously constructed things of beauty. The opening bank job is fairly standard, but the theft of the drugs, which involves trains and helicopters, is ingenious, echoing in its own way the crooks dangling from a hole in the ceiling in Jules Dassin's Rififi. Richard Crenna goes about his work with a silent resolve, taking each step with grim determination. What is interesting this time around is it's also the same determination that Delon's detective takes in tracking the misdeeds. The line between criminal and cop has been erased. Long sequences pass with no dialogue, just the sound of the surrounding world. It's as if words are more precious, and more dangerous, than bullets.

Dirty Money is a fitting end to a distinguished career. Jean-Pierre Melville was a master of his craft, and his powers had not yet begun to wane. Sadly, he passed away a year later at the age of 56, far too young for a filmmaker this spry. Perhaps that is why that final image remains so haunting, the police telephone unanswered. On the other end of the line is information about a new crime, a new case that is now a story that will never be told. 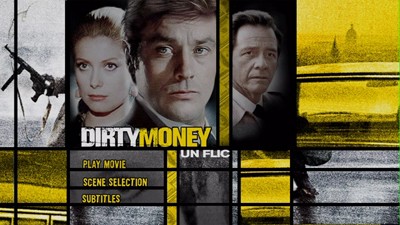 Video:
Anchor Bay first released Dirty Money under its original Un Flic title several years ago. I don't have that disc to compare it to, but from the research I've done the specs are almost identical to this new Lions Gate edition. Dirty Money is shown at 1.85:1 aspect ratio, anamorphic widescreen. The image quality is by and large very good, maintaining the chilly, almost monochromatic blue coloring. I noticed a little combing in some of the early scenes, and there is some surface dirt at various times during the movie, but it's generally a conscientious restoration.

Sound:
The original French audio is given a Dolby monaural mix that is of noticeable quality despite its lack of fanciness. Given that so many scenes only have sound effects and the ambient noise of the setting, the clarity of the audio is much appreciated. Removable English subtitles offer a solid translation.

Extras:
No extras. The previous edition had a trailer and some talent bios, so it was nearly as barebones as this one. 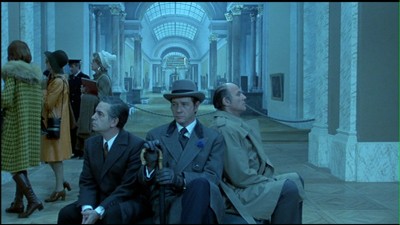