Year My Parents Went on Vacation, The

City Lights // Unrated // July 15, 2008
List Price: $26.98 [Buy now and save at Amazon]
Review by Chris Neilson | posted July 21, 2008 | E-mail the Author
Brazilian director Cao Hamburger pulls together many well-worn clichés to mediocre effect in the mawkish coming-of-age story The Year My Parents Went on Vacation (2007). Set against a backdrop of politically tumultuous Brazil circa 1970, young Mauro (Michel Joelsas) has his childhood turned upside down when his dissident leftist parents (Simone Spaladore and Eduardo Moreira) decide to leave him with his elderly grandfather in São Paulo while they go underground. Unfortunately for young Mauro, and unbeknownst to his parents who leave him at the curb, granddad suffered a fatal heart attack just after learning that Maruo would be staying with him. 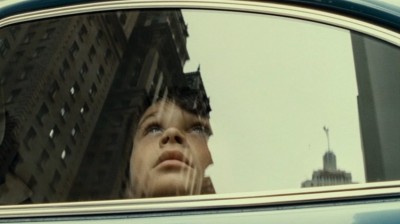 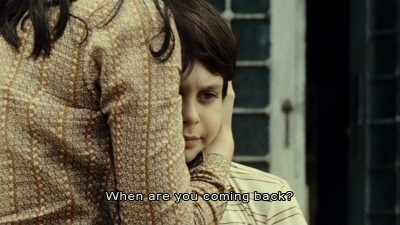 Suddenly all alone, Mauro is reluctantly taken in by a gruff, religiously-devote, elderly Jew, Shlomo (Germano Haiut). From here, the story moves along well worn story lines. Elderly, Jewish Shlomo and boyish, goyish Mauro have great difficulty growing accustomed to one another, but inevitably develop deep mutual affection. Mauro befriends the local children within the tightly-packed Jewish neighborhood, and hits it off especially well with a spunky girl of similar age, Hanna (Daniela Piepszyk). Mauro develops a crush for an unattainable ingénue, Irene (Liliana Castro), to the consternation of Hanna. The kids play ball in the streets, take joy in Brazil's success in the 1970 Soccer World Cup, and try to satisfy their emerging sexual curiosity by sneaking peaks at women undressing. 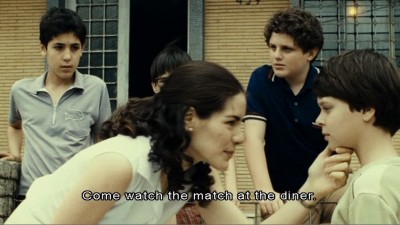 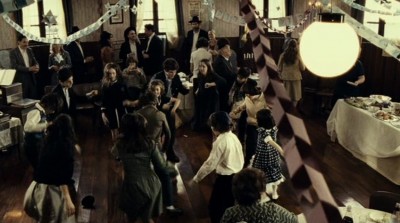 Throughout The Year My Parents Went on Vacation, there are many scenes designed to provoke laughter or tears. Though it's generally clumsily obvious which is which, any doubts are immediately resolved by the score that always pushes the viewer one way or the other. Director Cao Hamburger brooks no ambiguities.

The Year My Parents Went on Vacation is narrated by Mauro from some indeterminate future date. Though his voice sounds no older, his ability to comprehend and put into words the events of that time suggests several years distance. Despite the fact that filmmaker Hamburger uses Mauro's narration to shape the film, he's not reluctant to show scenes to which Mauro was not present. Thus though The Year My Parents Went on Vacation is informed by Mauro's experience, it's not thoroughly grounded in it.

The trite, overly-sentimental storyline of The Year My Parents Went on Vacation is partially redeemed by strong acting from its child actors, Michel Joelsas and Daniela Piepszyk, and by an interesting backdrop against which the narrative unfolds. Joelsas is believable throughout despite his rather difficult role, and Piepszyk brings a great deal of charisma to her role. And, though the protagonists are too young to understand the events taking place around them, the glimpses of a country obsessed with soccer while in the midst of political upheaval provide some modest relief from an otherwise unimaginative coming-of-age story.

The DVD
The Video:
The 1.85:1 image is enhanced for widescreen. The image generally looks good with nice grain, and steady colors that appear to faithfully render the yellow-dominated film palette, though the image often looks slightly soft.

The Audio:
The 5.1 DD audio suffers no noticeable dropouts or distortions, and makes good use of all speakers. Subtitles for the original Portuguese, Yiddish, and German audio are available in English and Spanish and appear to be well translated, and appropriately sized, paced, and placed.

The Extras:
Extras include the international and U.S. trailers for The Year My Parents Went on Vacation, a reel of interviews with cast and crew (15:38), a "making of" featurette (9:51), and extended scenes and outtakes (7 min). There are also five trailers for other City Lights DVD releases. These trailers play automatically upon disc startup, but are not selectable from the extras menu.

Final Thoughts:
The back cover of the DVD-release of The Year My Parents Went on Vacation includes a blurb from a review by The Palm Beach Post: "MOVE OVER MACAULAY CULKIN. . . MAKE WAY FOR MICHEL JOELSAS." Fair enough. It does seem high time for Mr. Culkin to make way for a younger, cuter imp, if he hasn't done so already. After all, it's been eighteen years since he was left home alone to the delight of families everywhere. So if you've been looking for a child actor as adorable as Mr. Culkin ever since 1994's Richie Rich, and you understand Portuguese, Yiddish and German, or don't mind reading subtitles, The Year My Parents Went on Vacation is for you.

For what it is, a mawkishly clichéd coming-of-age story, The Year My Parents Went on Vacation is fairly good, and sports excellent child actors and a mildly interesting back story. For viewers looking for a film that the whole family can sit through together (again presuming everyone's willing to read subtitles), you could do worse.