ITV // PG // June 23, 2008 // Region 0
List Price: £19.99 [Buy now and save at Co]
Review by Stuart Galbraith IV | posted July 23, 2008 | E-mail the Author
Extremely bizarre yet oddly endearing, Escape to Athena (1979) is a highly derivative all-star war movie with a strong undercurrent of incongruous broad comedy. It plays like each of its four main stars was told theirs was the leading role. As such, none are on the same page: David Niven plays it like a sequel to The Guns of Navarone, Elliott Gould thinks he's doing M*A*S*H Goes to Rhodes, Telly Savalas is still fighting The Battle of the Bulge, and Roger Moore camps it up like he's guest-starring on The Muppet Show.

ITV's region-free import disc is a knock-out. The film looks great; DP Gil Taylor's (Star Wars, The Omen) cinematography, with its numerous sweeping helicopter shots and roving Steadicam work, combined with the bright, picturesque Greek scenery really lends itself well to the Blu-ray format. The transfer is near-flawless and the DNR is kept in check. The extras are modest but interesting. 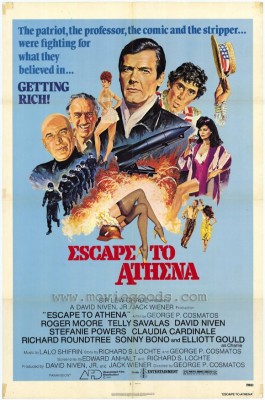 It's 1944 somewhere on a German-occupied Greek island. Major Otto Hecht (Roger Moore) runs Stalag VII Z, a unique P.O.W. camp where archeologists like Professor Blake (David Niven) excavate ancient treasures which are then looted by the Nazis. Hecht, a one-time shady art dealer himself is also skimming off the top, secretly shipping the most valuable treasures to a secret warehouse in Switzerland.

Equal parts derived from Navarone, The Great Escape, Where Eagles Dare, Stalag 17, and Kelly's Heroes, Escape to Athena is as familiar as an old pair of sneakers but it's also (mostly) lighthearted and ingratiating. The film was shot on the island of Rhodes in the Aegean Sea (also not coincidentally where The Guns of Navarone was filmed) and the bright vacation atmosphere matches the tone of the picture.

The only-in-the-'70s cast includes Sonny Bono playing, I guess, an Italian soldier. It's hard to tell because in early scenes he-a talks-a like-a the Chico Marx, but later in the film has no accent at all. Posters and other advertising obscured the fact that Moore, then at the height of his popularity as James Bond, here plays a German officer, albeit a "good bad guy," significantly Austrian- rather than German-born, a last-minute change to soften the character. "I'm now playing it like Curt Jürgens," Moore quipped at the time, "instead of Hardy Krüger."

Directed and co-written by George P. Cosmatos, who later helmed the even more ludicrous Rambo: First Blood Part II and the underrated Tombstone, Escape to Athena is very handsomely produced, and as a straight-on action film it delivers the goods. The action set pieces, including an exciting motorcycle chase through narrow village alleyways, show considerable imagination and skill. There's some good stunt work and the locations are used in the best way possible. About half the time the film is played straight; there are even scenes early on of innocent Greeks being executed.

Conversely, the picture's discordant attempt at comedy severely damages the film as a whole, especially any and all scenes featuring Elliott Gould. The actor spent much of the late-1970s making films either financed by English companies or shot outside the U.S., and while he was perfectly fine in another ITC production, Capricorn One (which also featured Savalas, 1978) here his flip, jaded, winking at the camera screen persona is simply too outrageous to be believed. This ain't Shoah, but are we really expected to believe a Jewish American would blithely cozy up to a German Officer (even if he is played by Roger Moore) or make wisecracks around SS soldiers who'd just as soon execute him on the spot? It's like dropping The Ritz Bros. into the middle of Bridge on the River Kwai.

This is the kind of film where amateurs like Gould's Charlie instantly become crack shots, picking off Germans in church towers 500 yards away while the Germans can't hit nuthin', even at point-blank range. But it's no bloodbath like The Dirty Dozen; Charlie walks away from the Big Battle with two half-inch wood splinters in his hand. Well, it could get infected.

Even more strange are bizarrely inappropriate moments like the brief but incredible scene where Gould's Charlie stumbles upon a POW: William Holden, reprising his Stalag 17 character. "Are you still here?" Charlie asks. "Not a bad life," Holden answers. It's always a pleasure to see Holden, but his appearance grabs the viewer by the collar and pulls him right out of the film. So does the film's end title song, a disco number (Why not?) called "Keep Tomorrow for Me," performed by Heatwave.

Escape to Athena was filmed in Panavision with original lab work by Rank. The 1080p and region-free Blu-ray disc looks wonderful and suits the format especially well, at least visually. With its sweeping helicopter shots - the first four minutes are nothing but - and aggressive Steadicam work (the motorcycle chase, etc.) it's practically a Cinerama roadshow. The opening flybys sweeping over mountaintop graves immediately establishes the quality of the transfer, the image is razor sharp and the low pre-dawn light come off very well on this disc. The mostly bright exteriors show off the cobblestone streets, sandstone cliffs, ancient ruins, etc. to good effect. (The aerial shots also work aesthetically; they help establish the island's geography and the layout of the villages and the monastery.)

Originally a mono release, Escape to Athena offers strong 2.0 Dolby Digital mono (with optional English subtitles) but it's a shame with all the battle scenes, explosions, and whatnot, to say nothing of Lalo Schifrin's Greek-influenced score, that the film wasn't remixed for stereo.

Note: Though running times for the film have run as high as 125 minutes, and the running time listed on the packaging says 114, both appear incorrect. The Blu-ray disc runs 119 minutes, and seems complete and uncut.

A fun trailer, in full 1080p high-definition, is included, along with more than an hour of Cast & Crew Interviews filmed on location. Interviewed are Elliott Gould, Roger Moore, Sonny Bono, George P. Cosmatos, producers Jack Weiner and David Niven, Jr., Claudia Cardinale, Stephanie Powers, Telly Savalas, and Anthony Valentine (who plays SS Major Volkmann in the film). The interviews are quite fun; Moore goofs around with his kids, Savalas looks anxious to get back to his card game, etc. The interviews do look a bit funky: they look slightly squeezed though presented in 4:3 standard size, and there seems to be some PAL conversion issues with them, or does standard-def material on a British-produced Blu-ray not convert properly when played on a high-def television accepting analog NTSC signals?

It's preposterous and generally unoriginal yet Escape to Athena is loads of fun anyway, and the Blu-ray presentation makes it unhesitatingly worthwhile. If you're a fan of this kind of picture, it comes Highly Recommended.