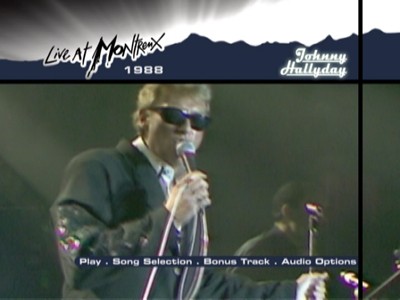 Johnny Hallyday is France's answer to Elvis, a rock 'n' roll crooner who began his career in the 1950s and continues to enjoy fame throughout Europe to this day. I was really only familiar with him by reputation, his name mentioned in various Nouvelle Vague films of the '60s amongst other pop culture references, some that I understood and some I didn't. Always eager to explore music that is new--at least to me--I picked up Johnny Hallyday: Live at Montreux 1988.

What I found was a Vegas-style performer doing his best to weather through some of the worst musical tastes of the 1980s. His gravelly voice and pompadoured swagger making him come across as a hybrid of Neil Diamond and Tom Jones, Hallyday puts on quite a show over this 17-song, 93-minute concert. He sings rocking up-tempo numbers, a couple of bluesy jams, and the occasional power ballad, and when he is front and center, Hallyday is a captivating performer. His voice isn't a knockout and he's certainly not got the charisma of either Diamond, Jones, or Presley, but it's clear to see why Johnny has sustained a career for 50 years. He may look a little Hasselhoff when he preens for the camera, but the man is able to work his pipes for everything they've got.

Unfortunately, since it's 1988, the gig has a few problems. For one, the Montreux Jazz Festival shows from the period, which I would often see broken up into individual clips on A&E back in the day, were shot on video and though likely of top standards in 1988, and though the DVD looks like it was taken from a pretty good master source, the look of the film leaves something to be desired. Though the cameramen get some great coverage from all over the concert hall, the overall image quality is rather flat and washed-out, as much video footage from the time is.

There is also a tendency to go too big with the production stylings. Hallyday's poodle-haired band, looking like extras from a Michael Bolton video, consists of two guitarists, a bass player, two keyboard plays, a saxophonist, a drummer, three back-up singers, and then Hallyday himself sometimes playing guitar. The result is an overabundance of arrangement, so that even when Hallyday begins a song like "Pendue a Mon Coup" on his own playing a Chuck Berry-style guitar lick, it's quickly buried under the sheer tonnage of back-up instrumentation. This lends a cheeseball factor to the music that detracts from the power of Hallyday as a belter and recalls how the Me Decade did its best to swallow other performers from Hallyday's era. David Bowie and the Who recovered, but Rod Stewart and the Rolling Stones apparently never will.

Still, Hallyday has a classic lounge sound that sticks true to his early rock roots, including a cover of "Whole Lotta Shakin' Goin' On" (the one English song) and two Bob Seger covers, the most familiar being "Le Bon Temps Du Rock and Roll (Give Me that Old Time Rock and Roll)." One duet with back-up singer Shandi Sinnamon (who looks like Sandie Shaw) is reminiscent of early Meat Loaf and perhaps one of the best moments of the show is when Hallyday drops the bombast for a blues-inflected "La Musique Que J'aime."

Not a bad show, overall, and definitely not a bad performance from the French singer, but it makes me think I need to dig farther back if I want to get the real Johnny Hallyday deal. 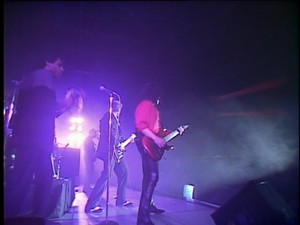 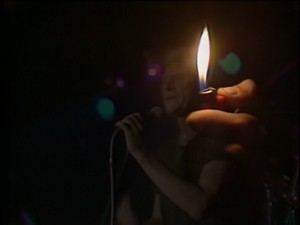 Video:
Shot for TV, Johnny Hallyday: Live at Montreux 1988 comes to DVD in 4:3 fullscreen format. Despite my complaints about the quality of the video production in the body of this review, the actual DVD has a solid transfer. The image is clean and free of dirt or scratches, and it looks like it was taken from a very good source. Low-level film production does not necessarily mean low-level DVD. I saw some combing here and there, but it wasn't persistent enough to be detrimental.

Sound:
The disc doesn't skimp on sound options. Three separate audio choices are offered: PCM stereo, DTS surround, and Dolby 5.1. The mixes are all good, maintaining the warmth of the live atmosphere and free of any hiss or off-color tones.

I do wish that some form of English subtitles has been included. Even if they weren't going to translate the songs, it would have been nice to have a translation of Johnny's stage banter. Admittedly, he doesn't talk all that much, but still....

Extras:
One bonus song is included, "To Stop the Game." It's not performed by Hallyday, but rather he gives the stage over to a singer named Erick Bamy, who has a voice that strives to be soulful like Al Green but that comes off as generic. Bamy is one of Hallyday's back-up singers, and this song probably fit in the set at the point where Johnny disappears off-stage and returns in a different outfit.

An 8-page interior booklet contains notes about the show, band credits, photos, and advertisements for other concert DVDs culled from the Montreux Jazz Festival series.

FINAL THOUGHTS:
Rent It. While I did enjoy watching Johnny Hallyday: Live at Montreux 1988, it is far from essential viewing, either from a musical or cinematic standpoint. All aspects of production reek of the big-haired '80s, and so you may want to weigh your affection from the era--or the lack thereof--before taking a chance on this concert DVD. If you've got a thing for Vegas acts or even 1960s French pop, then you might find more reason to take a look. Johnny Hallyday is a performer who delivers, he just likely has had better days. 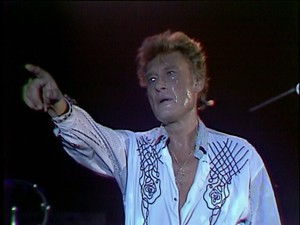 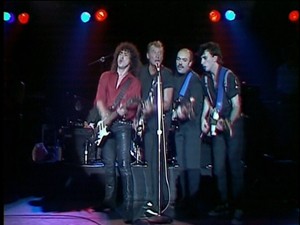