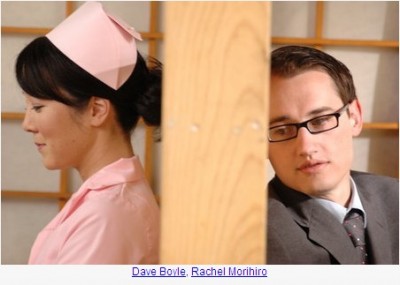 In an unnamed city's Japantown, Boyd (Dave Boyle) is a self-styled businessman in the Japanese manner: formally attired, he bows reverently at potential clients, hands everyone who'll listen to him his business card...and speaks near-flawless Japanese, no small feat for a gaijin. He peddles copies of his highly specialized book on Japanese business etiquette, but mostly relies on a supportive father to bail him out of financial ruin month after month.

Boyd lives with a dopey Japanese-American roommate, Jerome (Jayson Watabe), who dreams of becoming a sumo wrestler like his hero, the legendary Akebono - the first foreign-born rikishi to reach the top rank of yokozuna. Unfortunately, despite pigging out on curry udon and the like, Jerome weighs in at a paltry 200 lbs. (The otherwise culturally-accurate film regrettably sells the common misconception that all sumo wrestlers are fat pigs.)

The pair unsuccessfully tries one scheme after another: a translation service, private English lessons, a Japanese takeout/delivery service. But in the midst of all this despair, Boyd meets a cute nurse, Mai (Rachel Morihiro), a native-born Japanese who rather inexplicably is unfazed by these two social misfits and their odd, often totally irresponsible behavior.

Big Dreams Little Tokyo (titles also identify the film in Japanese: Biggu doriimuzu ritoru Tokyo) has many funny ideas but it also limits its appeal by keeping its main characters sketchy and at arm's length. Boyle seems to want his audience to root for Boyd and Jerome, to be in their corner, but because we learn almost nothing about them and their motivations, in the end their actions come off merely as immature. Neither is given a backstory to speak of. How did Boyd learn to speak Japanese so well and, more importantly, what attracted him to the Japanese salaryman way of life? The film's press materials describe Boyd as a man who's "convinced he's Japanese," but what does that mean? Is there something about being "American" he finds distasteful and/or unmanageable? Is he dealing with his own insecurities by hiding behind another cultural identity? If he wants to "be Japanese," what's he doing in America? None of this is explored or explained.

Jerome is even more hazily drawn, basically the comedy's comic relief who's given the show's broader laughs, often cheap jokes about his eating habits and the diaper-like mawashi he wears around the apartment.

Nevertheless, Big Dreams Little Tokyo nails certain truths about the impenetrable wall existing between the real and imagined Japan, between "real" Japanese and all outsiders, including Japanese-Americans. "One of the more authentic" sushi shops has, inevitably, Mexican-American cooks and items like California roll on the menu. Despite Boyd's near-fluency, most native Japanese insist on speaking to him in their singularly broken English. (This is common source of frustration even in Japan.) Upon learning Boyd speaks Japanese, the American personnel director at a job interview enthusiastically tells Boyd, "I have a brother stationed over in Seoul right now!"*

Some scenes are pretty funny. Near the end there's a lengthy, very amusing scene where Boyd has recruited one of the Mexican sushi chefs, Andy (Drew Knight), to help interpret what turns into a disastrous business meeting between a cut-to-the-chase Mexican investor and a gaggle of typical Japanese business executives. Though Morihiro delivers a sweet, appealing performance, her extremely tolerant nurse is just too good to be true and the audience never learns very much about that character, either, one functioning much like Emma Thompson's nurse in The Tall Guy, also about a culturally displaced American (Jeff Goldblum) and his (too) forgiving girlfriend.

Though obviously made by a neophyte filmmaker on an extremely low budget, Big Dreams Little Tokyo looks fairly polished and professional for what it is. That the filmmakers don't attempt anything beyond their means or abilities help, as does Mark Schultz's pleasingly quirky score, which carries some of the less successful scenes.

Note: Apparently the film's "Japantown" juxtaposes footage shot in San Jose, San Francisco, and Salt Lake City. Given its fictional origins, in keeping with the title why not call the setting "Little Tokyo?"

Big Dreams Little Tokyo was shot on digital video and presented here in a 1.78:1 enhanced widescreen transfer. The image looks okay, not exactly film-like but not bad, though its darker nighttime scenes reveal their source and contrast is pretty weak here. The film is mostly in English, supported by English subtitles for the Japanese and Mexican dialogue. The stereo audio is adequate.

The usual stuff: audio commentary with director-writer-star Dave Boyle and co-star Jayson Watabe that's a little too casual for its own good; a pretty good 12-minute behind-the-scenes featurette; deleted scenes; storyboard-to-film comparison; webspots; and the usual photo gallery. Also included is Yamamoto & Company, scenes from a short film used to raise money for the feature.

Big Dreams Little Tokyo is more interesting than funny, and will likely appeal to a very finite demographic; hard-core indie film fans and those with an interest in Japanese/Asian cultural and linguistic issues. For those audiences the film is worth a look, but most will be satisfied to simply Rent It.