ITV // G // June 23, 2008 // Region 0
List Price: £19.99 [Buy now and save at Co]
Review by Stuart Galbraith IV | posted July 30, 2008 | E-mail the Author
Though virtually forgotten in America despite the presence of Jodie Foster in the cast, British audiences positively adore Bugsy Malone (1976). It's a bizarrely conceived gangster movies parody with an all-kiddie cast mimicking adults and lip-synching incongruous '70s-style pop songs written (and in some cases sung) by Paul Williams.

The film surprised many by placing 19th on a list of the 100 Greatest Musicals, in a 2003 poll by Britain's Channel 4 network, beating out such competition as Fiddler on the Roof, Seven Brides for Seven Brothers, and Oklahoma!. Another network, ITV, in 2004 aired a documentary called Bugsy Malone: After They Were Famous that reunited the cast, including Foster and co-star Scott Baio. Bugsy Malone was even adapted for the London Stage. Conversely, in America there seems to have been no home video release of the film at all after a VHS tape version of perhaps 20 years ago, though a British DVD has been a popular import title for quite a while.

As a movie, Bugsy Malone is visually sumptuous and a real curiosity that's never dull, but for various reasons the filmmakers can't quite pull off the unusual concept. It's also, debatably, a little bit creepy to watch, like those elaborate beauty contests for little girls or, as my wife less delicately put it: "It's a pedophile's dream!"

ITV's region-free Blu-ray delivers an impressive presentation of the film that really shows off the film's superb production design, similar in some ways to Warren Beatty's 1990 film of Dick Tracy. There are a lot of extras on the disc, but these are in standard definition PAL format and therefore unlikely to play properly on high-def televisions purchased in North America. 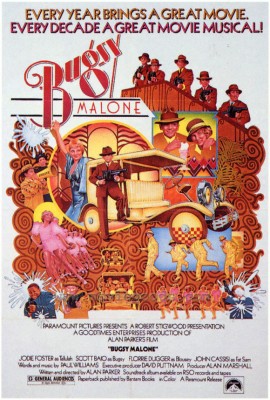 In 1927 New York (not 1929, despite what it says on the packaging), a turf war exists between rival gangsters Fat Sam (John Cassisi) and Dandy Dan (Martin Lev). Meanwhile, roguish Bugsy Malone (Scott Baio) falls for Blousey Brown (Florrie Dugger), an aspiring singer with dreams of making it big in Hollywood. When Dandy Dan wipes out most of Fat Sam's enforcers with Tommy Gun-like "splurge guns" (they shoot globs of custard instead of bullets), the bootlegger turns to Bugsy for help, unaware that Fat Sam's girl, Tallulah (Jodie Foster), still carries a torch for the good-natured Bugsy.

This is one strange movie. Filmed in England, at Pinewood Studios, Bugsy's New York Streets and speakeasy interiors, along with all the props and furniture and the like, have been meticulously built to about three-quarters scale, so that the cast, most of whom seem about 11-15 years old, are "to scale" with the environment around them. They look like adults, more or less (the girls wear period makeup and hairstyles and some of the boys even have mustaches), they act like adults, and they drive around in pedal-powered automobiles. Williams' songs, something like "whimsical pop," don't match the visuals at all; overall, it's sort of like The Godfather meets The Terror of Tiny Town, with music.

Though not shot and definitely not scored anything like a pre-Code gangster film from the early 1930s, in other respects the film is downright uncanny, especially the look of the young actors (if there had been an Oscar category for casting, this would have deserved one), their costumes and makeup, and much of the dialogue. ("Have you eaten?" Bugsy asks Blousey. "Ever since I was a kid," she answers.) It's not exactly a parody because about 75% of the film is played straight, albeit crammed with genre cliches; with minor changes and an adult cast, this could have been a very different picture, something between The Sting and The Untouchables.

One very wise move by the filmmakers was avoiding obvious references to famous scenes and genre icons like Cagney or Edward G. Robinson. The characters, even the most minor ones, fit perfectly in an early-'30s gangster movie world, acting and speaking in the genre's style with a real period authenticity, without ever imitating anyone directly. Bugsy is sort of a Ricardo Cortez type, Blousey is kind of a Glenda Farrell/Barbara Stanwyck type, and so forth. The four leads have something in common: they're child actors who come across as adult-like to begin with. That's certainly the case with Jodie Foster, whose performances had adult nuances even when she was very young. It's interesting to watch them - and it's Dugger and Cassisi rather than Baio and Foster who most impress - lose themselves so completely in these characters.

The score is another matter. A few of the songs are lively as is the choreography accompanying them, but I would have preferred one in step with the rest of the picture instead of constantly at odds with it. Even something as simple as orchestrating it with period instruments (a la The Beau Hunks, the Dutch musical ensemble) would have resulted in something less jarring.

Writer-Director Alan Parker does a fine job generally, though some of his choices seem a bit odd, like the decision to use flash-forward footage over the opening titles, which only serves to give away several of the film's charming surprises. The script is more impressive for the way it nails the iconography of the genre, especially its dialogue, rather than as a genre spoof. Some ideas don't seem to have been thought through completely. When characters are shot with Splurge Guns, the image typically freeze-frames, signifying what: death? What happens after you're "hit?" You're dead? And yet in the last scene there's a huge blood- er, custard bath and splurge-firing frenzy, yet it's as harmless as a pie fight. All the automobiles are pedaled like bicycles yet also make putt-putt-putt noises like old cars. Though it's a minor complaint, the movie doesn't really play by its own rules or fair with its audience.

As with ITV's other Blu-ray releases, Bugsy Malone is an excellent 1080p presentation that maximizes the film look without resorting to ruinous DNR. It's bright, at times exceptionally sharp, and the colors (original lab work by Rank) bright and accurate. Retaining the film's Rank Organisation logo from its British release, the image, 1.66:1 or 1.85:1 in theaters, here is 1.78:1. Though an 89-minute running time is listed on the box, in fact it runs a complete 93 minutes, including about a minute's worth of exit music at the end.

Audio is available in Dolby Digital 2.0 mono, reflecting its original theatrical run, and a remixed Dolby Digital 5.1 stereo. Both tracks are nice but not overpowering. Optional English subtitles are included.

Supplements include an audio commentary with writer-director Alan Parker and, in PAL format, a couple of trailers featuring Foster and other cast members in footage directly addressing the camera and not in the film; a photo gallery, and a "From Sketch to Screen" Feature with very rough sketches outlining shots synched to the film's soundtrack. On my Region A Blu-ray recorder the PAL footage was funky-looking (weirdly positioned on the 16:9 screen and not unsqueezed) but at least I could see it, sort of. Other Blu-ray players may have better or worse luck with these than I did.

It's a one-of-a-kind movie definitely worth watching once. It's a beautifully-made film, quite colorful and in its way maybe the most accurate gangster movie spoof ever to come along. So, if you're a fan of '30s gangster movies or '70s movies, chances are there's something in there for you, and ITV's fine Blu-ray does the film justice. Recommended.