ITV // PG // June 23, 2008 // Region 0
List Price: £19.99 [Buy now and save at Amazon]
Review by Stuart Galbraith IV | posted July 31, 2008 | E-mail the Author
An enjoyable though greatly flawed romantic comedy-drama dance movie, Strictly Ballroom's colossal success on the art house circuit established director Baz Luhrmann's (Romeo + Juliet, Moulin Rouge!) reputation. To its credit its popularity seems to have directly inspired films as varied as Shall We Dansu? (1992), Japan's own take on the same basic concept; and Best in Show (2000), the hilarious mockumentary about dog owners as obsessive as ballroom dancers. The film is peppered with fine little moments and good performances (and dancing), but the review in Leonard Maltin's Movie Guide really nails it, saying, "This crowd-pleaser sacrifices credibility for caricature." Boy, does it ever.

Among ITV DVD's excellent line-up of region-free Blu-ray discs, Strictly Ballroom is probably the weakest transfer of their recent releases, ironic given this is the newest film in a batch of movies dating back to the mid-1940s. It's still okay but a bit soft and lackluster. In fairness, I doubt even a transfer under the best of circumstances with the best possible elements could be improved by more than 10-15%. A behind-the-scenes documentary is included, but it's standard-def in PAL format and isn't likely to play properly on NTSC televisions purchased in North America. 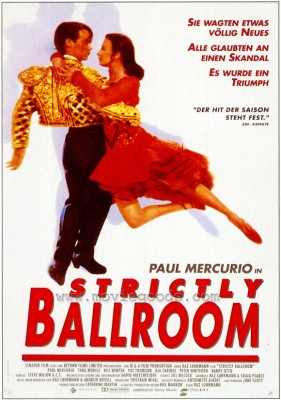 Handsome Australian Scott Hastings (Paul Mercurio) is a talented ballroom dancer, a shoo-in at the Pan-Pacific Grand Prix were it not for a burning desire to break with convention and incorporate new steps into his dances, a major no-no in such conservative competition. Despite enormous pressure from the dogmatic, self-serving judging committee and his win-at-all-costs mother (Pat Thompson), a former competitor who owns a major dance studio herself, Scott secretly takes on mousy beginner Fran (Tara Morice) as his new partner. Though her look is all wrong (nerdy glasses, bad skin, and frizzy hair), Fran has the same love for dance and innovation he does, but can their burgeoning romance survive the pressures from their families and the risk of ridicule and ostracization from their dance associates?

Strictly Ballroom gets off on the wrong foot with an opening montage that, stylistically, resembles a postmodern television commercial, with the kind of way over-the-top mugging and extreme camera angles one sees when Hollywood stars travel to Japan to pitch coffee and lipstick. It's like something out of John Waters: the men all wear ludicrous toupees while those with hair look even worse. The women are all atrocious dressers, carrying the flamboyant costumes of the sport home, their faces hidden under layers upon layers of Oompa-loompa like makeup. The opening scenes are presented as a fake documentary quite similar to the films Christopher Guest & Co. made later on, but this device is dropped as quickly as it's introduced.

The campy satire gives way to unsubtle Cinderella story, though Tasmanian Tara Morice has a winning personality, and like Annie Oakley in Annie Get Your Gun undergoes a dramatic transformation, though the film botches this badly by rushing it through in the space of about five minutes.

Ultimately, Strictly Ballroom is like Luhrmann's later blockbusters incredibly superficial, though the relative simplicity and modest budget, $3 million (Australian dollars), keep his excesses in check, and overall this is probably his most satisfying film.

Besides Morice's charm and Mercurio's impressive dance moves, the film has several pretty good scenes. The standout comes when Scott visits Fran's very traditional, working class family, Spaniards who initially are highly skeptical of his motives. As written, audience expectation is that Scott will win them over by dancing the Paso Doble, a Spanish dance modeled after the move of a matador and bull. However, it's Fran's intimidating father (Antonio Vargas) and grandmother (Armonia Benedito) who teach him a thing or two about dancing. Though virtually raised on a dance floor, Scott's only mastered technique; Fran's family teaches him how to express his soul.

The inconsistent tone, especially the grotesque caricatures and broad comedy of everyone outside of Scott, Fran, and her family gets in the way of the heart at the film's core trying to get out. Also working against the picture is, as Maltin accurately describes it, how in its naked manipulativeness all credibility goes out the window. The final scene may have had audiences jumping for joy, but it's about as believable as The Brain from Planet Arous.

Strictly Ballroom is presented in an okay 1080p / 1.78:1 presentation (adapted from its 1.85:1 theatrical run) possibly not accessed from the film's camera negative. The image is rather soft and mildly unattractive, though probably not too far removed from what it looked like in theaters when it was new. (Original lab work: Atlab Film Laboratory Service in Sydney. This British release bears the Rank "gong" logo at the head.) Color, contrast, and sharpness are all rather unimpressive.

Originally Dolby mono, ITV's Blu-ray has been remixed for Dolby Digital 5.1 with a 2.0 mono track also included. It's okay as well, mainly servicing the film's soundtrack of classical and pop tunes. Optional English subtitles are included.

A trailer in high-definition is included, but the behind-the-scenes documentary and John Paul Young "Love is in the Air" music video are standard-def PAL, and look strange, at least on my TV, where the image is squeezed and pixilated, though it was watchable.

For most audiences, Strictly Ballroom is the kind of movie you either buy whole-heartedly or not at all. Those that embrace will probably love it, so if you're a fan of the director's later films you'll probably like this, too. Others still, like this reviewer, will find it real hit-and-miss, though if you come into the film with no expectations, it's reasonably entertaining. Mildly Recommended.